Many observers of China’s escalating global program of foreign investment and infrastructure development are crossing their fingers and hoping for the best. In an ideal world, China’s unbridled ambitions will improve economic growth, food security and social development in many poor nations, as well as enriching itself.

Such hopes are certainly timely, given the isolationism of the US Trump administration, which has created an international leadership vacuum that China is eager to fill 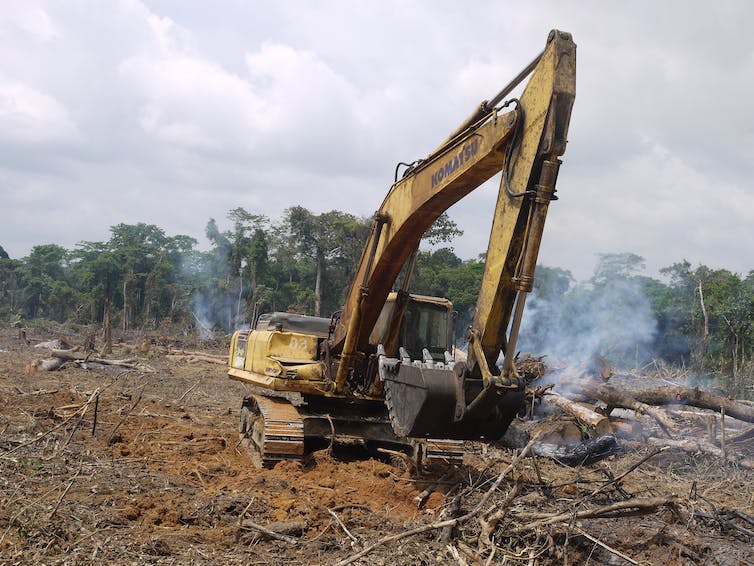 But a close look reveals that China’s international agenda is far more exploitative than many realise, especially for the global environment. And the Chinese leadership’s claims to be embracing “green development” are in many cases more propaganda than fact.

To help steer through the maze, I provide here a snapshot of China’s present environmental impacts. Are China’s assertions reasoned and defensible, or something else altogether?

For a start, China is overwhelmingly the world’s biggest consumer of illegally poached wildlife and wildlife products. From rhino horn, to pangolins, to shark fins, to a menagerie of wild bird species, Chinese consumption drives much of the global trade in wildlife exploitation and smuggling.

Over the past 15 years, China’s rapacious appetite for ivory has largely driven a global collapse of elephant populations. In response to growing international criticism, China promised to shut down its domestic ivory trade by the end of 2017. 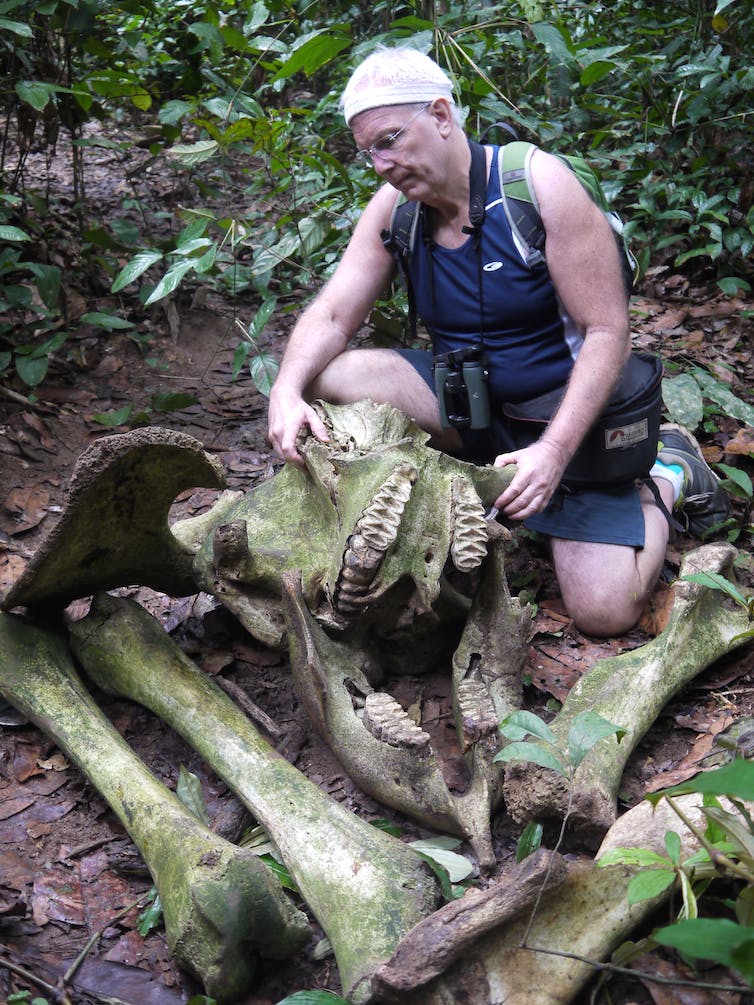 But even before China’s ban has taken full force, a black market for ivory is developing in neighbouring Laos. There, Chinese entrepreneurs are churning out great quantities of carved ivory products, specifically designed for Chinese tastes and openly sold to Chinese visitors.

China is also the world’s biggest importer of illegal timber, a trade that imperils forests while defrauding developing nations of billions of dollars each year in timber royalties. 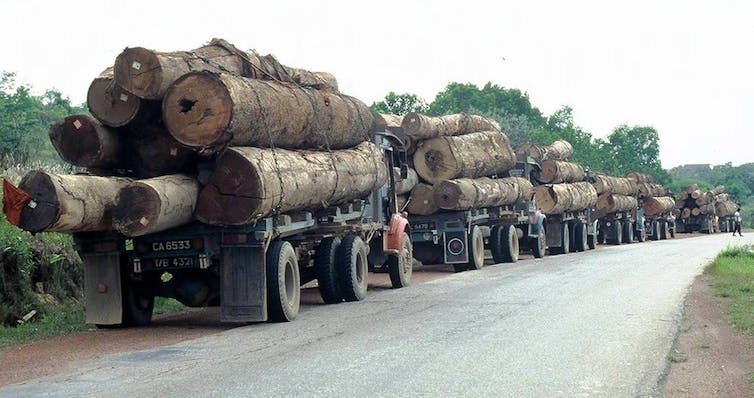 China claims to be working to reduce its illegal timber imports, but its efforts are half-hearted at best, judging by the amount of illegal timber still flowing across its border with Myanmar.

More damaging still are China’s plans for infrastructure expansion that will irreparably degrade much of the natural world.

China’s One Belt One Road initiative alone will carve massive arrays of new roads, railroads, ports, and extractive industries such as mining, logging, and oil and gas projects into at least 70 nations across Asia, Europe, and Africa. 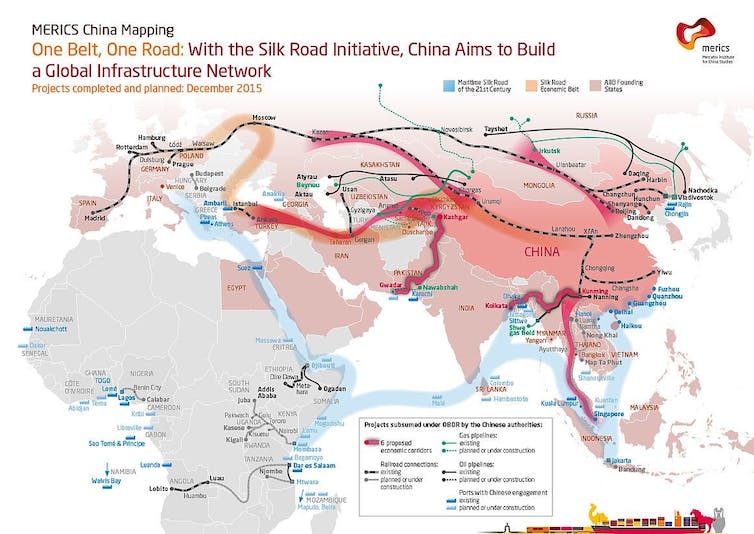 A partial representation of China’s One Belt One Road scheme, circa 2015. Photo: Mercator Institute for China Studies.

Chinese President Xi Jinping promises that the Belt and Road initiative will be “green, low-carbon, circular and sustainable”, but such a claim is profoundly divorced from reality.

As my colleagues and I recently argued in Science and Current Biology, the modern infrastructure tsunami that is largely being driven by China will open a Pandora’s box of environmental crises, including large-scale deforestation, habitat fragmentation, wildlife poaching, water pollution and greenhouse gas emissions.

China’s pursuit of natural resources is also escalating across Latin America. In the Amazon, for example, big mining projects – many of which are feeding Chinese industries – don’t just cause serious local degradation, but also promote widespread deforestation from the networks of roads bulldozed into remote areas to access the mines.

Overall, China is the most aggressive consumer of minerals on the planet, and the biggest driver of tropical deforestation.

Beyond this, China is pushing to build a 5,000km railroad across South America, to make it cheaper for China to import timber, minerals, soy and other natural resources from ports along South America’s Pacific coast. If it proceeds, the number of critical ecosystems that would be impacted by this project is staggering.

A World Bank study of more than 3,000 overseas projects funded or operated by China revealed how it often treats poor nations as “pollution havens” – transferring its own environmental degradation to developing nations that are desperate for foreign investment.

Finally, much has been made of the fact that China is beginning to temper its appetite for domestic fossil-fuelled energy. It is now a leading investor in solar and wind energy, and recently delayed construction of more than 150 coal-fired electricity plants in China.

These are unquestionably pluses, but they need to be seen in their broad context. In terms of greenhouse-gas emissions, China has exploded past every other nation. It now produces more than twice the carbon emissions of the United States, the second-biggest polluter, following the greatest building spree of coal, nuclear, and large-scale hydro projects in human history.

Despite its new post-Trump role as the world’s de facto climate leader, China’s overall agenda could scarcely be described as green. 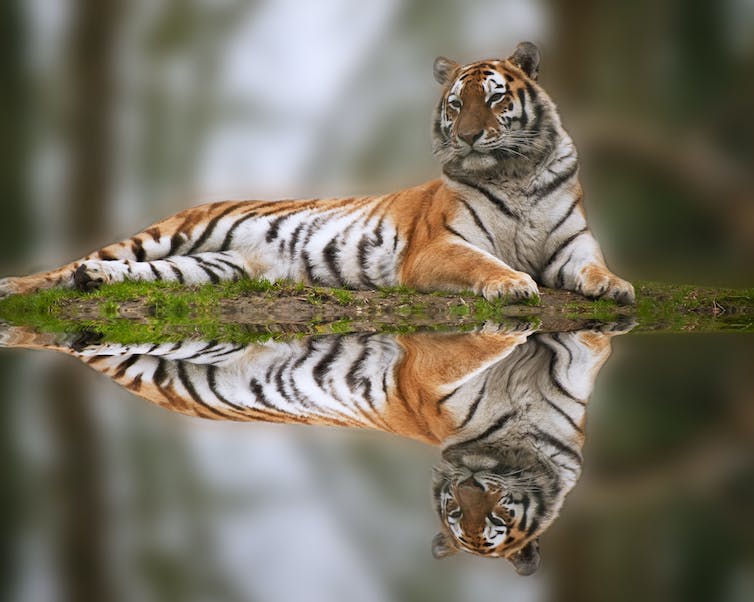 A tiger relaxes along a grassy bank. Photo: Matt Gibson/Shutterstock.

Some would say it’s unfair to criticise China like this. They would argue that China is merely following a well-trodden path of exploitative development previously forged by other nations and colonial powers.

But China is not the same as any other nation. The astounding growth and size of its economy, its dangerously single-minded vision for exploiting natural resources and land internationally, its intolerance of internal and external criticism, and its increasingly closed media and official myopia all combine to make it unique.

President Xi admits that many Chinese corporations, investors and lenders operating overseas have often acted aggressively and even illegally overseas. But he says his government is powerless to do much about it. The most notable government response to date is a series of “green papers” containing guidelines that sound good in theory but are almost universally ignored by Chinese interests overseas. 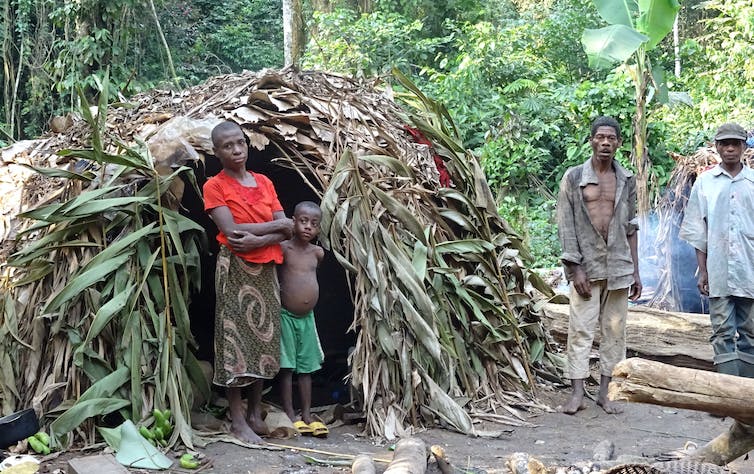 Are Xi’s assertions of powerlessness believable? He increasingly rules China with an iron hand. Is it really impossible for China to guide and control its overseas industries, or are they simply so profitable that the government doesn’t want to?

Of course, China’s huge international ambitions will have some positive effects, and could even be economically transformative for certain nations. But many other elements will benefit China while profoundly damaging our planet.