Twenty years ago, as a fresh graduate, I flew to Hong Kong just a few months after the handover, to begin my first job. I spent five very happy years working as a journalist in Hong Kong, from 1997-2002. I never expected that twenty years later, I would be refused entry to Hong Kong.

In the past three years I have become increasingly concerned about the erosion of Hong Kong’s freedoms and the rule of law, and the threats to “one country, two systems”. As a result, I have been increasingly engaged in advocacy for Hong Kong. I have had the privilege of hosting, in London, Joshua Wong, Nathan Law and Anson Chan, and of working closely with Martin Lee – all heroes and friends of mine. I decided it was time for me visit Hong Kong again, simply to meet people and to listen and learn about the current situation. I had visited Hong Kong several times over the past fifteen years, but had not been back for a few years. My intention was to meet people privately. I had made discrete enquiries about whether or not it would be possible or desirable to visit Joshua Wong, Nathan Law or Alex Chow in prison, but I had realised a week or more ago that it would not be possible. Unfortunately, even enquiring about the possibility drew the attention of the Chinese authorities.

The first indication I had that there was a problem came last Friday, when I received a telephone call from a British Member of Parliament whom I know well and respect greatly. He informed me he had received calls from the Chinese Embassy in London, expressing concern that an attempt to visit these three student leaders would pose “a grave threat to Sino-British relations”. I asked him to reassure the Chinese Embassy that I would not be attempting to visit any prisons. I took a further step – a compromise, some might say one too big, but one intended to de-escalate the situation – by voluntarily assuring them that I would not undertake any public engagements or media interviews while in Hong Kong. I also offered to meet the embassy upon my return, for a constructive discussion and to hear their perspectives. These offers were rebuffed and I received further, increasingly threatening messages from the embassy, culminating in a message warning me that I would be denied entry.

It appears there was another factor too. I serve as Deputy Chair of the Conservative Party Human Rights Commission, a voluntary role in my spare time, and I am on the Conservative Party’s Candidates List. It appears that the Chinese authorities misunderstood my status and thought at first that I was a Member of Parliament or a senior party or government official, and that my visit to Hong Kong would be in an official capacity on behalf of the party. I suppose one could forgive them for that mistake, because in China a party member is a party member come what may. They perhaps don’t understand that British political parties are made up of individual, independent minds – and furthermore there’s a difference between a voluntary party member and a party official, and a difference between someone acting on behalf of the party and someone acting in a private, personal capacity. Nevertheless I sought to reassure the embassy, via a third party, that I was absolutely not representing the party, and certainly not the government, and that my visit was a purely personal, private visit to meet old friends and new acquaintances in Hong Kong, as a private citizen. Unfortunately, that did not satisfy either.

In consultation with others, I took the view that if I were to cave in to pressure from the embassy, sent through unofficial text messages via a third party, I would be doing exactly what I have criticised others of doing: kowtowing to China. My conscience would not allow me to do that. How could I look my friends Joshua Wong, Nathan Law, Alex Chow, Martin Lee, Anson Chan and others in the eye if I caved at the first hurdle? I decided therefore that I had to put it to the test by going as planned to Hong Kong. Perhaps they were bluffing, threatening to deny me entry in the hope that I would go away quietly. Or, if they were serious, then they would have to refuse me entry formally and publicly, exposing to the world yet another example of the erosion of one country, two systems. 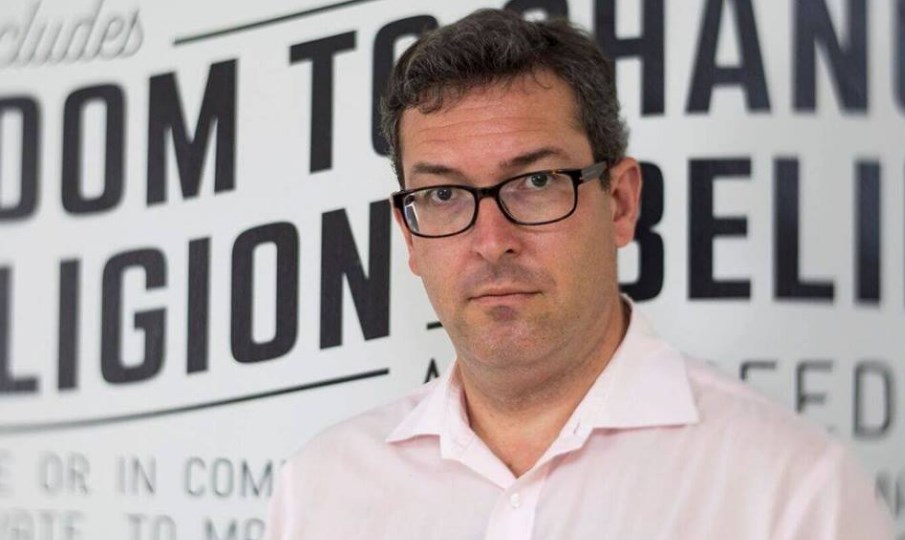 Very regrettably, the latter course was what occurred. I landed in Hong Kong, proceeded to immigration, and when my turn came I presented my passport and arrival card as normal. The immigration officer put my name into the computer, and evidently the computer said no. She called other officers over, they took me to a private room behind the counters, and I was asked to wait. After a little while a plain clothes official conducted an interview with me. I assured her that my visit was a private, personal visit to meet friends, and that I had lived in Hong Kong for five years. She took details of my hotel booking, and I thought perhaps they were about to allow me in. A little later, however, she informed me that the decision had been made to deny me entry, and put me back on the flight to Bangkok, which was where I had flown from.

It is important to emphasise that I do not in any way blame the immigration officers who “looked after” me during this time. They were just doing their job and, in the circumstances, they treated me as kindly and courteously as possible. Their manner was polite and friendly, they offered me water, they smiled. Indeed, I had the impression that they really did not want to be doing this, but that they were operating according to orders from above, beyond their control.

As I waited to board I turned gently to the officer standing with me. I smiled, and I thanked him for looking after me well. “Is one country, two systems dead now?”, I asked. “One country, one system, right?” He looked with a hint of tears in his eyes, pleadingly. “Sir please, I am just doing my job. I cannot comment. Thank you for your cooperation”. I reassured him that I knew he was only doing his job, and that I did not blame him.

A little later, as we shook hands at the entrance to the plane, I said to him: “This is a very sad day for Hong Kong. It’s sad for me, that I am unable to visit my friends in Hong Kong, but it’s particularly sad for Hong Kong, that a private citizen who has committed no crime is refused entry.” He nodded, again with a hint of tears. “I understand. It is sad,” he said. My final word to him was this: “I hope things will change for the better”. 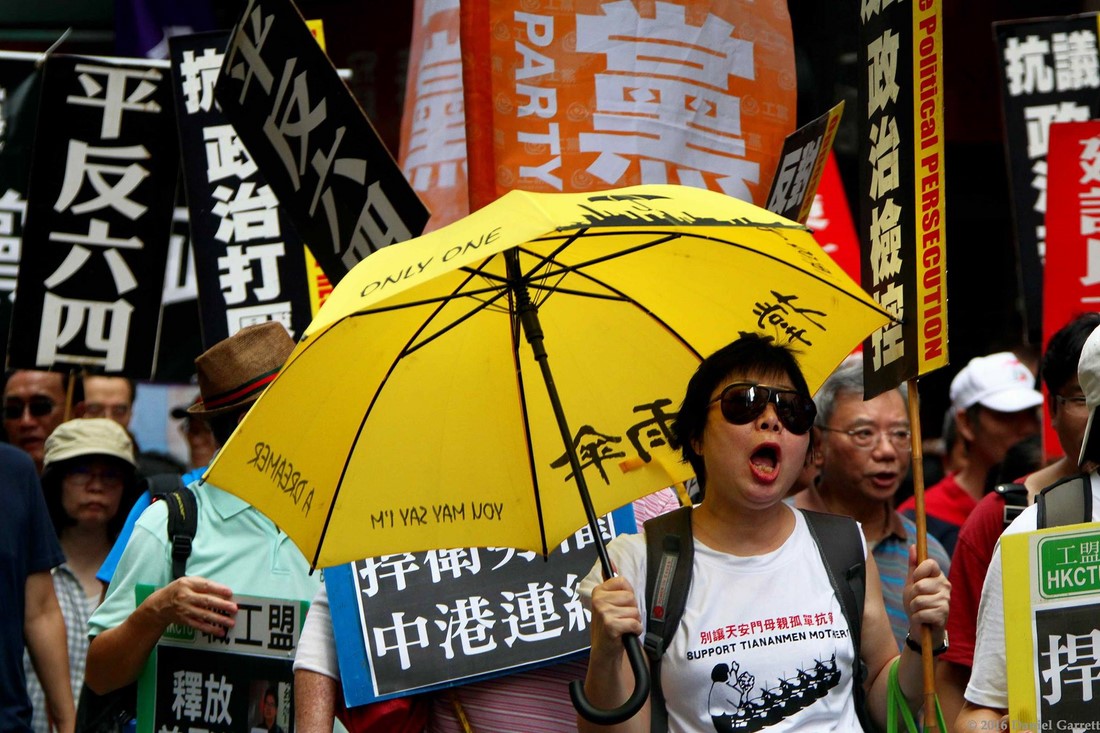 “One country, two systems” is supposed to mean “Hong Kong people ruling Hong Kong”. Yet it is overwhelmingly clear that the decision to deny me entry to Hong Kong was not taken in Hong Kong, but by the Chinese regime. “One country, two systems” is supposed to mean the rule of law, yet a solicitor, Albert Ho, who very kindly took the train out to the airport in order to meet me and see if he could assist, was denied access to me because I was put back on the plane before he could reach me. “One country, two systems” is supposed to mean basic rights in Hong Kong – freedom of expression and association – yet despite assurances from me that I would not engage in any public events, and would simply be having private meetings, my own freedom of expression and more importantly the freedom of expression and association of those I had hoped to meet has been curtailed. 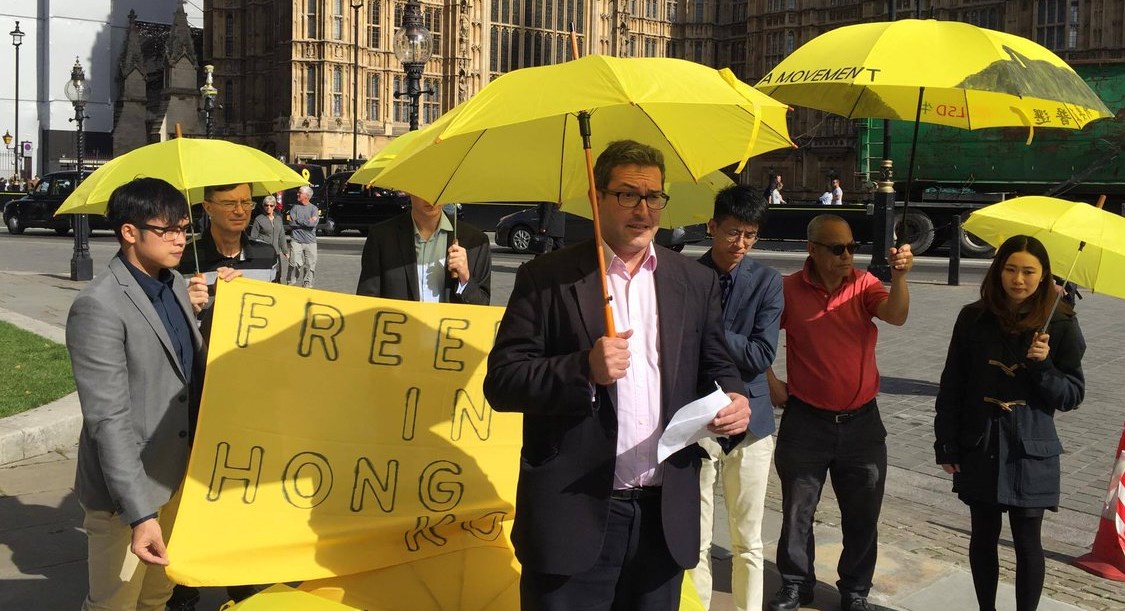 At a protest in the UK. Photo: Benedict Rogers.

This is not about me. It is about Hong Kong. And it is clear from this very stark, personal, first-hand and painful experience that if “one country, two systems” is not yet completely dead, it is dying rapidly, being decapitated limb by limb with accelerating speed. The world, and especially the United Kingdom with its responsibilities under the Sino-British Joint Declaration, must wake up to this. I am no threat to Sino-British relations. But I believe the conduct of the Chinese regime, particularly in Hong Kong, is.

A version of this op-ed first appeared in The Guardian.

Benedict Rogers: Why the world must wake up to China's threat to freedom in Hong Kong