A page on the Hong Kong Education Bureau’s website introducing the national anthem has been amended, with the section on its background significantly cut, amid controversy over a new Chinese law that seeks to prosecute those who insult the song.

The new legislation seeks to punish those who insult the anthem, March of the Volunteers, with violators in China facing detention of up to 15 days by police, or criminal prosecution. The Chinese legislature’s executive body will officially propose including the law in Hong Kong and Macau’s mini-constitutions at their meeting this October, according to mainland news outlets. 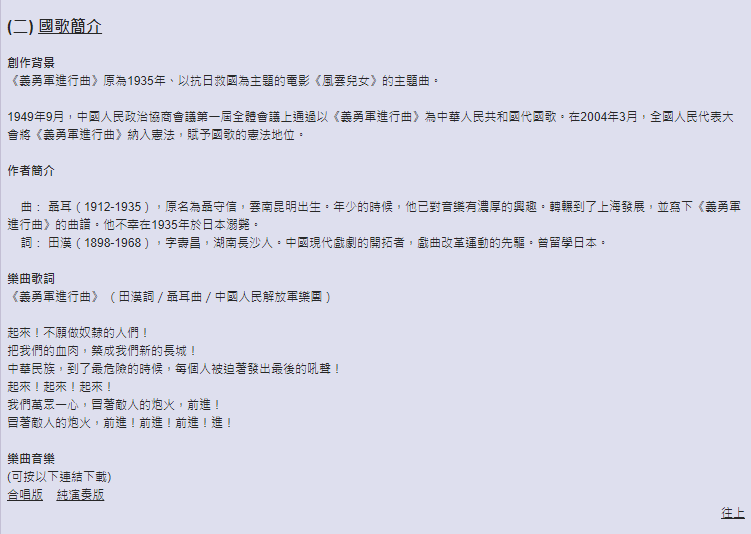 Online media Citizen News discovered on Thursday evening that the section describing the history behind the creation of the song is different from the version a journalist viewed that morning.

The original passage was 412 words long and contained detailed historical information about how its creators wrote the song in the light of the Second Sino-Japanese War. However, the new description is only three lines long.

See also: Will Hongkongers be able to move or blink during China’s national anthem? Lawmaker urges clarity on new law

The initial passage describes how the writers of the songs, Tian Han and Nie Er, wrote the song for the movie Children of Troubled Times “with boundless passion towards the country,” in order to urge the people to unite together for the nation in times of difficulty.

The song, the original description stated, was a battle anthem born out of the fires of the Second Sino-Japanese War. However, the remaining description merely states that it was the theme song of the resistance movie Children of Troubled Times. 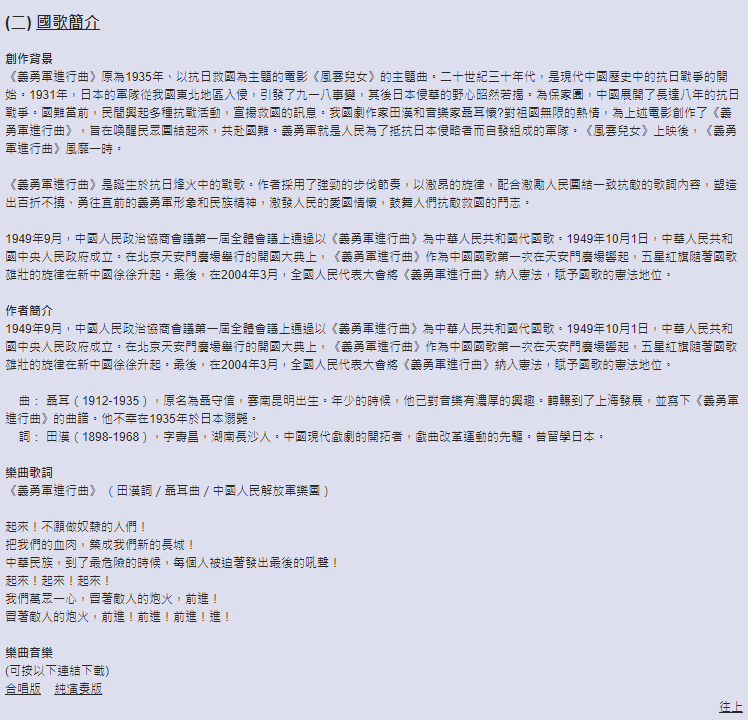 A screen capture of the same webpage this February, as shown on the Wayback Machine archive.

The new webpage also lacks passages about how the song was played for the first time at Tiananmen Square on October 1, 1949, when the People’s Republic of China was founded. Instead, it simply describes how the song became the acting national anthem in the first Chinese People’s Political Consultative Conference and was given constitutional status in 2004.

Neither the original, nor the amended version, mentions that Tian Han was later condemned as a “counter-revolutionary” during the Cultural Revolution era and died in prison. Despite the changes, the last day of amendment on the Education Bureau website is still shown as December 30, 2013.

Update: 1/9: In a reply to HKFP, the Education Bureau said that it was carrying out website updates, and that the national anthem page was being modified.

“As for the content that has been deleted as reported by the media, it is not a permanent erasure, but rather [it] will be enriched appropriately. The new version will be uploaded onto the site soon.”

It added that the amendment date will be changed when the work is complete.