Politics in Hong Kong is generally portrayed as a battle between the pro-democracy and pro-establishment camps.  But sometimes attention ought to be focused less on political allegiances and more on competence.

Suspend disbelief for a moment. Imagine that there was not the slightest element of politics involved in the jailing of Joshua Wong and the rest. The law is the law. They crossed the line. They paid the price… Tricky, of course, but work with me. Now consider the efforts the government has made to develop Hong Kong as a legal paradise. Look no further than a speech made by Secretary for Justice Rimsky Yuen SC at Hong Kong’s “2017 Colloquium on International Law” on 7 July 2017. Mr Yuen there, sensibly and justifiably, talked about Hong Kong’s entitlement to conclude and implement agreements with foreign states and international organisations in the “…economic, trade, financial and monetary, shipping, communications, tourism, cultural and sports fields”.

He illustrates this by reference to air service agreements, reciprocal juridical assistance, Hong Kong Kong’s participation in the WTO, APEC, WIPO and so on, and then moves on to draw attention to Hong Kong’s efforts to strengthen its position as “an international legal and dispute resolution services hub in the Asia Pacific region”. Mr Yuen refers to the government’s providing office space in the Central business district to law related organisations such as the Asian Academy of International Law. In addition to these measures, he might also have mentioned recent legislation relevant to international arbitration on subjects such as third party funding and intellectual property, and also a new apology ordinance.

Nobody can seriously question the sincerity of the government on these matters, but now compare all those efforts to promote Hong Kong as a great place to do law, with the on-going efforts apparently to destroy its legal reputation.

Chief Executive Carrie Lam and Secretary Yuen have gone on record to dismiss any political element in the jailings.  Lam is reported to have said that the consequences of the “groundless attacks” on the judiciary “could damage Hong Kong, as the foundations of the city’s success lay in having an independent judiciary and upholding the rule of law”. 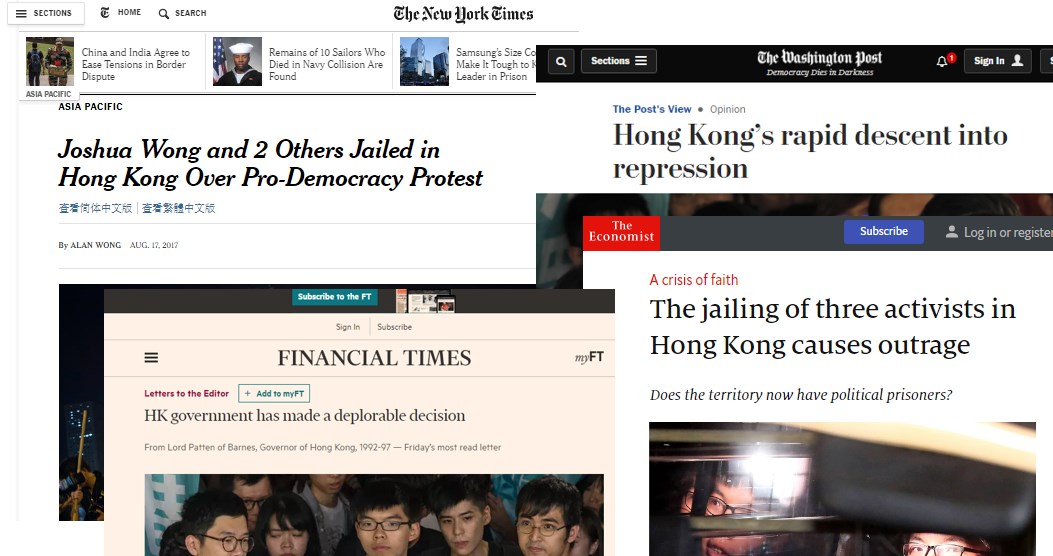 But just hold on. What did she expect the media to say? Did she really expect them to nod gravely and mutter softly about just rewards reaped by impetuous youngsters?

If so, then perhaps she also thinks that business executives in London, New York, Frankfurt and Delhi do not read these headlines over breakfast.

Imagine the general counsel of a large multinational.  His or her company is making a huge investment in the Far East, and the only remaining issue is where the parties will litigate or arbitrate any dispute which may, sadly, arise. Rhetorically, are they going to make a recommendation to the CEO that they choose Hong Kong which, according to the WaPo, is rapidly descending into repression – it’s a fair assumption that they will not be making any distinctions between Hong Kong’s criminal and civil/commercial justice systems – or will they go for Singapore with its somewhat sterile, but nonetheless stable government and legal system?  Go figure.

Actions have reactions. At the end of the day, it was not the media which prosecuted the activists, and nor was it they who decided that an appeal against sentence should be pursued. It was the government.

The self-same government that is so anxious to make Hong Kong a legal hub.

Come on Hong Kong government. If you really didn’t foresee that jailing these people would create an international firestorm, or consider the possibility that it would embroil the judiciary in controversy, or that it might deter businessmen from bringing their disputes to Hong Kong, then there is a degree of utter incompetence within this government which needs to be addressed without delay.

Charles Allen is a commercial lawyer who has lived and worked in Hong Kong for over 20 years.

A high degree of utter incompetence: Hong Kong wants to be a legal hub, but destroys its own reputation