Hong Kong has been brought to a standstill as Typhoon Hato passes through. It is the strongest storm to hit the city since 2012. This picture taken on July 23, 2017 shows people shielding themselves from the rain with umbrellas as they queue to enter the International Book Fair in Hong Kong, after the Hong Kong Observatory downgraded a typhoon warning. Photo: Aaron Tam/AFP.

Hato was closest to the territory at 11:45am, according to the Hong Kong Observatory. As of 12:45pm, it was set to make landfall over Zhuhai to the west of Macau, and is expected to weaken and gradually move away from Hong Kong.

While the rainstorm warning has been cancelled, Hurricane Signal No. 10 is likely to remain in force over the next few hours, and the Hong Kong Observatory advises the public to be prepared for destructive winds, flooding and landslip.

According to the Hong Kong government:

Vehicle access to United Christian Hospital has been completely blocked due to a collapsed tree Sau Nga Road. The Accident and Emergency Department will continue to provide services and the public can enter the building via Hip Wo Street. There is no ambulance service, and patients will be sent to other hospitals until the road is clear.

All hearings of the courts and tribunals will also be adjourned as the Hurricane Signal No. 10 was still in force at 11am.

In Hung Hom, a gondola appeared to smash into an apartment building, destroying several windows. According to Ming Pao, the apartments depicted in the viral video are Chatham Gate in Lo Lung Hang. According to pictures shared by reader Kevin Campbell, there also appears to be window damage at Central’s Hang Seng Bank.

Flooding has been reported in various districts. According to the Hong Kong Observatory, Quarry Bay has recorded a high water level of 3.6 metres above chart datum. It urged the public to stay away from the shoreline and low-lying areas. 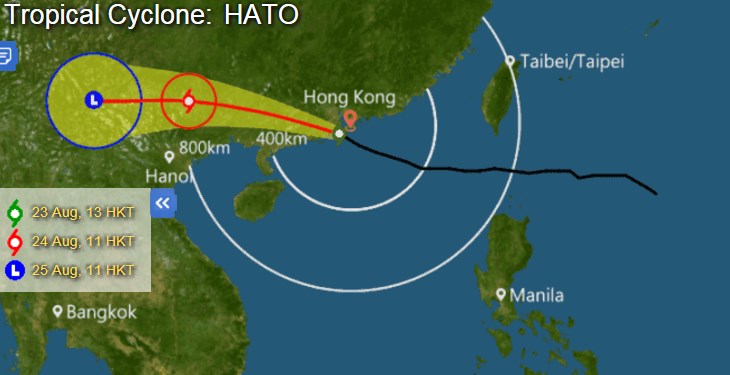 Tai O has also recorded a water level of 3.7 metres above chart datum, and is expected to rise to 3.9 metres based on forecasts.

The Hong Kong Observatory has warned of severe flooding in low-lying areas and affected residents are being moved to temporary shelters and safe locations.

T10 storm: Hong Kong grinds to a halt as Typhoon Hato rips through the city