As Typhoon Hato moves inland, the Observatory has said it will consider issuing the Strong Wind Signal No. 1. A woman looks out to Victoria Harbour during heavy winds and rain brought on by Typhoon Hato in Hong Kong on August 23, 2017. Photo: Anthony Wallace/AFP.

“Strong winds are still affecting the southwestern part of Hong Kong. Depending on the changes in local winds… Under the influence of the outer rainband of Hato, there will still be occasional showers and squalls,” said the Observatory. 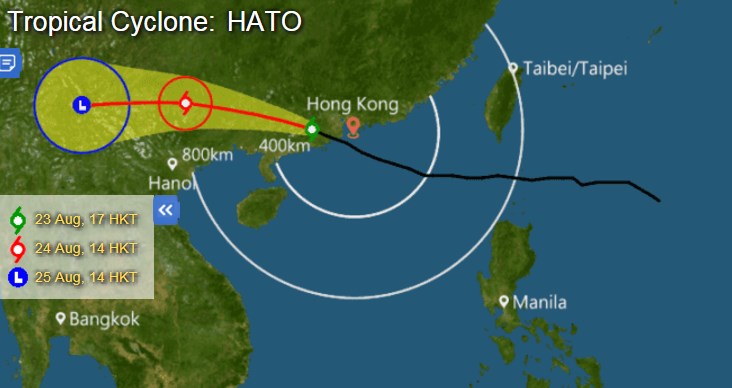 A spokesperson from the Airport Authority told reporters in the afternoon that flights were affected throughout the day. Though Hato is moving away from the city, the airport area may still be affected by crosswinds and unstable weather for a period of time, he said. A man stands in his plastic poncho during heavy winds and rain brought on by Typhoon Hato in Hong Kong on August 23, 2017. Photo: Anthony Wallace/AFP.

He said that the authority expects to be able to handle 400 flights before midnight.

Two runways will operate throughout the night, and the authority will communicate with immigration, customs, ground operations, the MTR and bus companies to increase staff and services. A man uses his umbrella as he walks on a street during heavy winds and rain brought on by Typhoon Hato in Hong Kong on August 23, 2017. Photo: Anthony Wallace/AFP.

He advised members of the public to contact their airlines before heading to the airport. The MTR is running all lines and Light Rail on an off-peak schedule. However, the Airport Express line remains closed. The MTR Corporation said its staff are preparing to resume normal service.

However, it may take time to clear debris from tracks, repair any damaged overhead lines and to get all trains and buses to the required operating locations. Areas including Lei Yue Mun and Tai O were badly hit by flooding. One resident in Lei Yue Mun’s Ma Wan village, Mr Chan, told RTHK that the road in the village was flooded by three feet of water, which also poured into houses. Chan said that the doors and windows facing the sea in his home were damaged, and his 90-year-old mother had to be rescued from the flooded house by firefighters. He estimated that he may have suffered damage up to HK$100,000. The fishing village of Tai O was also flooded by water that was waist-deep in some places, according to HK01. The outlet reported that some residents took their belongings and retreated to higher ground, while firefighters knocked on doors and advised residents to leave.

A 1.9 metre deep carpark in Heng Fa Chuen, holding up to 100 cars, was also flooded during the storm. The insurance sector has said that if car owners bought “full coverage” car insurance, they would be protected; but if they had only purchased third-party motor insurance, it would be difficult for them to receive compensation, according to HKET.

According to the government: