The UK government was warned in 1989 that after the handover it would be “impotent” and “without remedy” if China breached the then-recently-signed Joint Declaration on Hong Kong’s future, declassified documents have shown.

The prophetic letter from then-MP Jim Sillars, the Scottish National Party’s deputy leader in 1989, was sent to then-prime minister Margaret Thatcher on May 12.

The letter was in a set of Home Office documents declassified last year, which is available to the public at the National Archives in Kew, London. Sillars said Hong Kong people were to be deprived of the opportunity of a fundamental right – to live and vote in a democratic country.

“It is one thing to transfer territory, but quite another to transfer people and provide them with cast-iron guarantees to protect their forward position,” he wrote. “The day the United Kingdom formally hands over sovereignty of the territory in 1997, you and I know full well that any breach of your agreement will see the UK quite impotent, without remedy in the face of any adverse reaction by China.”

“If you have misjudged the value of your agreement, and breaches occur, then it is not you but the people of Hong Kong who will pay the price,” Sillars added. “No-one knows that better than those people themselves, and for you to suggest that the agreement is ‘much welcomed’ in Hong Kong is the reverse of truth.” 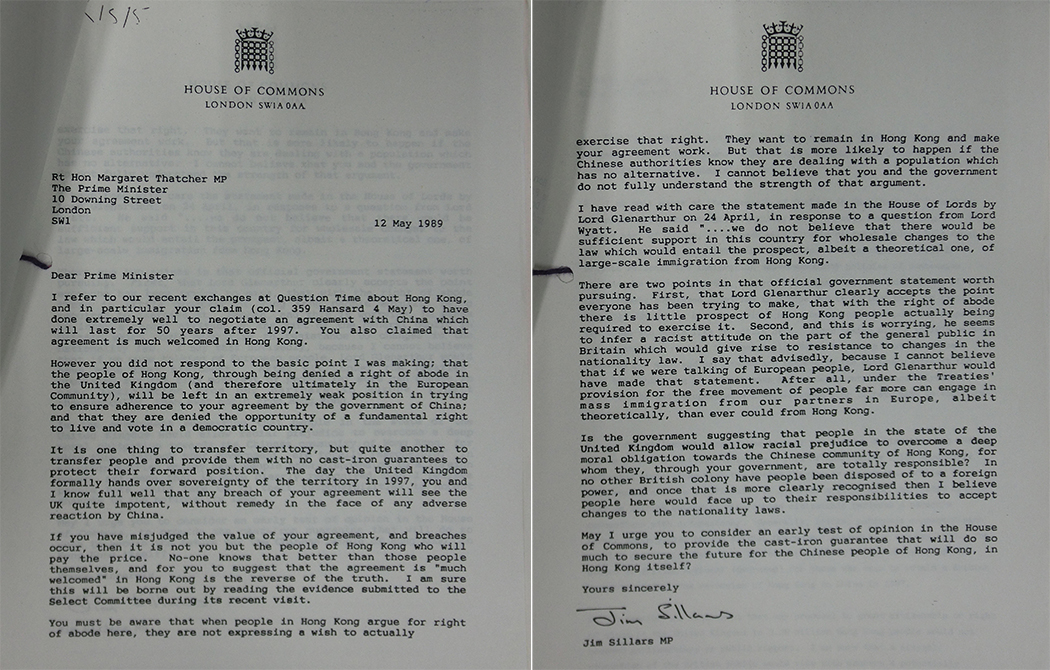 The Chinese Foreign Ministry recently said that the Joint Declaration is a “historical document and does not have any practical significance” nor any “binding power,” whilst the UK cast strong opposition, saying that it is legally binding and that the UK is committed to closely monitoring its implementation.

In the late 1980s, there was a wave of immigration by Hongkongers seeking security overseas. Sillars argued that the people of Hong Kong would have little bargaining power in making sure China adheres to the declaration if they were denied the right of abode in the UK.

He recalled a statement made by Lord Glenarthur at the House of Lords which said there would not be sufficient support in the UK to change British law, “which would entail the prospect, albeit a theoretical one, of large-scale immigration from Hong Kong.”

Sillars said the statement was worrying, since he believed the government would not make the same statement if it was speaking of European people.

“Is the government suggesting that people in the state of the United Kingdom would allow racial prejudice to overcome a deep moral obligation towards the Chinese community of Hong Kong, for whom they, through your government, are totally responsible?” he wrote.

“In no other British colony have people been disposed of to a foreign power, and once that is more clearly recognised then I believe people here would face up to their responsibilities to accept changes to the nationality laws.” 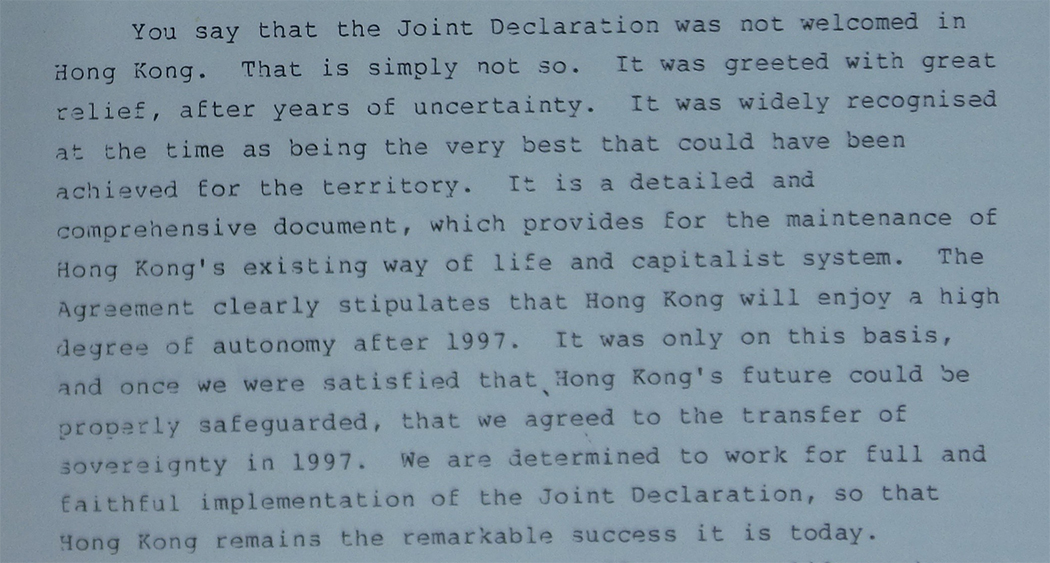 Thatcher replied to Sillars on May 30, 1989. She said it would be “wholly impracticable” to take on the commitment of large-scale immigration from Hong Kong.

“No one can predict with any accuracy or certainty what effect your proposal would have on Hong Kong, whose population has always been a highly mobile one,” she wrote.

Thatcher was also confident that “a robust and well established system of representative government will be established in Hong Kong by 1997.”

“You say that the Joint Declaration was not welcomed in Hong Kong. That is simply not so. It was greeted with great relief, after years of uncertainty. It was widely recognised at the time as being the very best that could have been achieved for the territory.”

“The Agreement clearly stipulates that Hong Kong will enjoy a high degree of autonomy after 1997. It was only on this basis, and once we were satisfied that Hong Kong’s future could be properly safeguarded, that we agreed to the transfer of sovereignty in 1997. We are determined to work for full and faithful implementation of the Joint Declaration, so that Hong Kong remains the remarkable success it is today.” After the Tiananmen Massacre on June 4, 1989, then-governor David Wilson flew to London to bring Thatcher a request from the people of Hong Kong.

“The Governor repeated that the request he brought with him was for all 3.25 million British nationals in Hong Kong to have the right of abode,” a 10 Downing Street document on June 8 read. “There was no doubt that a positive response would have a dramatic effect on confidence in the Colony. But it was clear from the Prime Minister’s remarks and statements made in Parliament that this would not be acceptable to the Government.”

Declassified files: UK warned in 1989 it would be 'impotent' if Hong Kong deal breached after handover