Hong Kong’s Innovation and Technology Bureau has posted a strongly-worded statement on its Facebook page, accusing ride-sharing company Uber of “deliberately breaking the law” and “acting irresponsibly in pursuit of commercial gain.”

Friday’s accusations came after 22 Uber drivers were arrested in late May following an undercover police operation. They were suspected of carrying passengers illegally for reward and not having third-party insurance. Following the raid, bureau chief Nicholas Yang was asked at the Legislative Council whether he would consider regulating sharing economy platforms such as Uber. He replied that amendments would be introduced “if the view of the majority is that certain legislation has become obsolete.”

A debate then ensued in local newspaper Apple Daily between Yang and public policy consultant Simon Lee, who wrote an open letter in support of the legalisation of Uber’s transport business. Yang said that while Uber’s transport model was illegal, UberEATS – its food delivery service – did not break the law.

On Wednesday, however, the bureau’s official Facebook page posted a strongly-worded statement criticising Uber without naming it directly.

“If someone thinks that ‘innovation’ or ‘catching up with global trends’ is an excuse for disregarding the law… then these comments are truly ‘unusually innovative’! But you damage Hong Kong’s core values, and damage the rights and safety of the public – is this what people want to see?”

On Friday, the bureau released another Facebook statement, which criticised Uber directly. 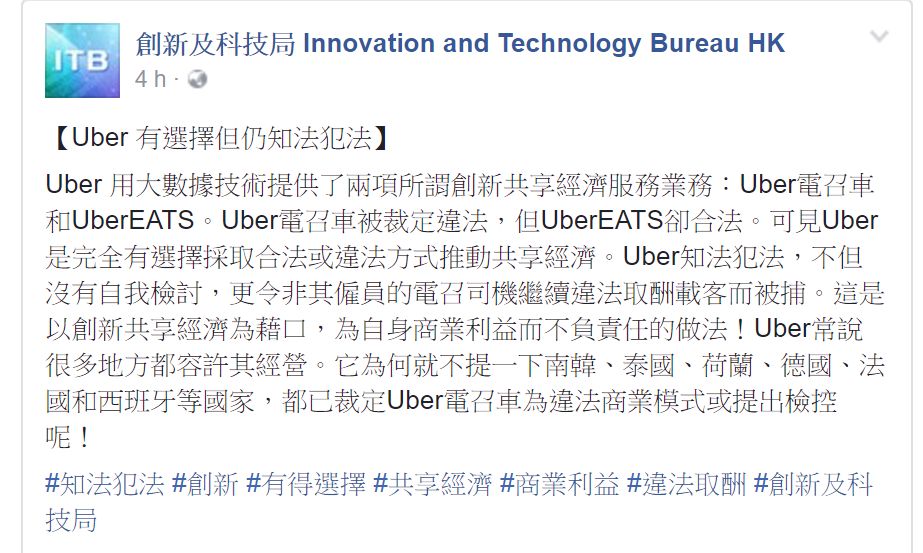 “Uber has a choice – but it is deliberately breaking the law,” it read. “It does not reflect on itself, but instead orders its drivers – not employees – to continue carrying passengers illegally and get arrested.”

“Innovation and the sharing economy are excuses – it is acting irresponsibility in pursuit of commercial gain!”

“Uber often says that many places allow it to operate. Why don’t they mention South Korea, Thailand, the Netherlands, Germany, France, Spain and other countries, which have ruled Uber’s ride-sharing model as illegal or have prosecuted it?”

A public relations spokesperson for the bureau told HKFP on the phone that the statement was indeed the bureau’s official stance – not that of any specific person within the bureau.

“Facebook has its own culture,” he said. “We wrote [the statement] for typical Facebook users, so we’ve written it a bit colloquially or informally.” “The Facebook pages of other government departments aren’t always so rigid either.”

The bureau’s statement was shared several hundred times by Facebook users, most of whow expressed surprise at its aggressive tone.

“Stop using social media platforms if your public relations skills are so poor,” wrote one commenter.

Another admitted that Uber’s business model was controversial, but advised the bureau not to only focus on questions of legality: “You need to assess whether this business model is actually good for the livelihood of Hongkongers.”

An Uber spokesperson told HKFP that the company hoped to work with the government to explore different models and achieve a positive outcome.

“As China, Singapore, Australia and more than 100 other governments around the world have shown, it’s possible to put in place regulations that regulate ridesharing.”