The MTR Corporation and the Highways Department have proposed modifying the design of To Kwa Wan station in order to preserve relics dating back as far as the 10th century. In a document released this week, the MTRC and the government suggested moving facilities whose location overlaps with an ancient well. A ventilation facility will be moved northwards, while the station concourse will be extended southwards to accommodate an additional plant room.

It was proposed that the well – and an associated drainage channel dated to the early 20th century – should be dismantled by hand and then reassembled, though not necessarily at the exact same location.

Since the lower part of the well intrudes into the station concourse, the roof of the station will be modified to form a trough to maintain flexibility for reinstating the well. A transparent panel will be placed at the bottom of the trough so that people can view the well from underneath.

The well (L) and the site preservation plan (R). Photo: Antiquities Advisory Board.

There are also plans to display some of the relics inside the station. The MTRC agreed to place two cabinets in the concourse for the purpose. The cabinets will be equipped with lighting, humidity control and security measures.

Six ancient wells and their associated drainage channels were uncovered in 2014. According to local media, thousands of relics – such as coins and clay pots from the Song, Yuan and Qing dynasties – were also unearthed. Archaeologists estimated that over a thousand people lived in the area centuries ago. 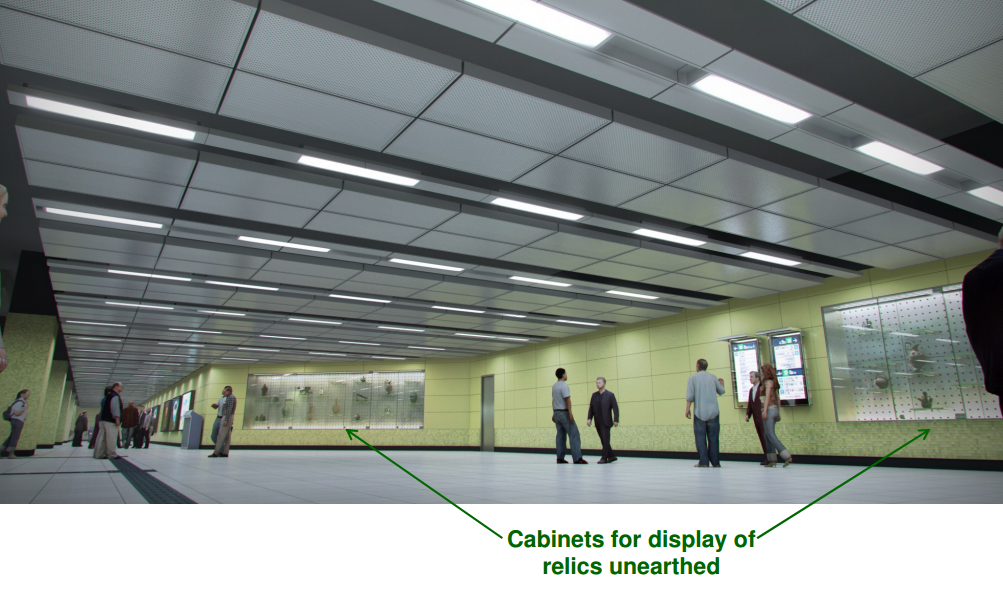 Other artefacts to be preserved in their original sites include a stone footpath and a stone structure that formed the banks of the former Ma Tau Chung river. Others such as a red brick well will be preserved by record.

Members of the Antiquities Advisory Board will give their views on the plans to the Antiquities Authority, which may declare a place or structure as a monument with the approval of the chief executive.

The Shatin to Central Link aims to connect Tai Wai to Admiralty via eastern Kowloon, passing through Kai Tak and To Kwa Wan. The first phase of the project – linking Tai Wai to Hung Hom – is expected to enter service in 2019.

The second phase of the project will connect Hung Hom with Admiralty via the Hong Kong Convention and Exhibition Centre in Wanchai. It is expected to be operational in 2021. In 2012, the government estimated the project would cost HK$79.8 billion.

Last November, Secretary for Transport and Housing Anthony Cheung Bing-leung said the construction would run over budget by HK$2o billion – making it the most expensive rail project in the city at nearly HK$100 billion.