Chinese human rights lawyer Xie Yang has “confessed” to working with foreign media outlets to sensationalise cases. He denied previous claims that he was tortured in an “exclusive interview” with a Hunan TV station.

Xie, who had worked on numerous cases considered politically sensitive by China’s ruling Communist Party, was among hundreds of legal staff and activists detained during a widespread crackdown in 2015.

The Changsha Intermediate People’s Court said Xie was being charged with “inciting subversion of state power and disrupting court order.” He admitted to being brainwashed overseas during the trial, the court said on its Weibo microblogging account. According to video posted by the court, when asked if his rights were protected during the investigation and in the legal process, Xie said “yes, fully protected,” and when asked if he had been tortured, he said: “no.”

Xie previously claimed police used “sleep deprivation, long interrogations, beatings, death threats [and] humiliations” against him, according to a detailed transcript published by his lawyers.

Following the opening of the trial, the “interview” was published online by the Changsha Broadcast and Television Group, a party-controlled Hunan TV station. The channel also posted a handwritten note purporting to be authored by Xie on Tuesday, stating that he had been released on bail after the hearing. It stated that he made his statement in court and accepted the interview of his own accord. It also declared an affidavit Xie signed on January 13 with his lawyer invalid. The affidavit said that, if he was to appear on TV or at a trial making a confession, it must be either the result of torture or a compromise made in exchange for being reunited with his family.

Today I once again met with my defense lawyer Chen Jiangang (陈建刚), and what I write here is entirely accurate and written without coercion. I hereby state that I am completely innocent of any and all the charges.

During the 18 months since I was taken into custody on July 11, 2015, I’ve suffered abuse and torment, but I have never admitted guilt, because I am not guilty.

If, one day in the future, I do confess — whether in writing or on camera or on tape — that will not be the true expression of my own mind. It may be because I’ve been subjected to prolonged torture, or because I’ve been offered the chance to be released on bail to reunite with my family. Right now I am being put under enormous pressure, and my family is being put under enormous pressure, for me “confess” guilt and keep silent about the torture I was subject to.

I hereby state once again that I, Xie Yang, am entirely innocent. 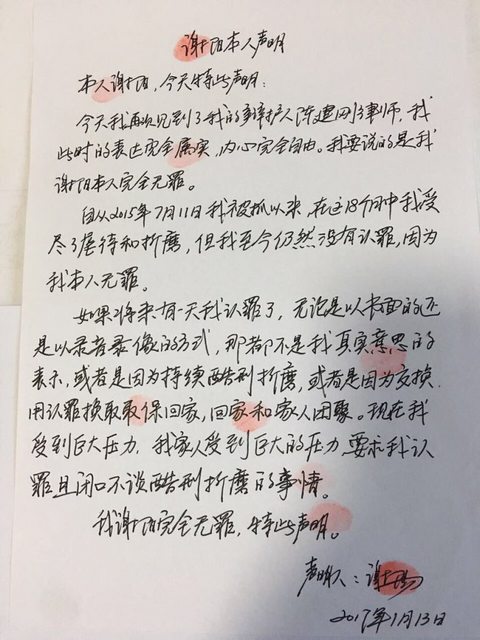 The video is the latest in a series of televised confessions featured on state media. Previously, legal activist Jiang Tianyong appeared on state TV to “confess” to fabricating accounts of Xie’s torture in order to “cater to Western media.”

The practice has been criticised for contravening the principle of presumption of innocence and interfering with defendants’ right to a fair trial.

Prior to Xie’s trial, his lawyer Chen Jiangang was detained by authorities as he was on vacation with his family, prompting criticism from the UN.

In a statement on Tuesday, the NGO Chinese Human Rights Defenders condemned the trial as as “mockery of justice.”

“The Chinese government tried to present a veneer of legality with Xie’s trial, by posting information on the court’s weibo account in real time, covering it on state TV, and featuring the case prominently on the court’s website. However, the heavily scripted hearing and its state coverage bears the familiar hallmark of previous show trials and government-staged TV confessions of other Chinese rights defenders,” the NGO said, citing the short notice given by the court prior to the trial, the house arrest of Xie’s father-in-law and supporters, and police warnings to activists not to attend.