An electricity box featuring phrases written by the deceased “King of Kowloon” Tsang Tsou-choi has been painted over by a government contractor.

Tsang’s outdoor calligraphy work is considered to be art by critics, but the remaining spots around the city have been gradually painted over by the government since his death ten years ago. Only three intact public works of his street art are now known to exist. Tsang, who died in 2007 aged 86, had been writing Chinese characters with ink in public for half a century. He claimed that Kowloon belonged to his ancestors, after studying the records of his clan from his mainland hometown. Following that, he began to to make his land claim and named his family members in distinctive graffiti across the city.

A worker for contractor Wan Chung construction, which conducts alterations, additions, maintenance and repairs for the Architectural Services Department in Kwun Tong, was photographed painting over the work on Tuesday.

The box, next to the Kwun Tong Road Children’s Playground, featured phrases such as “Hong Kong government Tsang Tsou-choi” and “China’s new emperor Tsang Fu-tong.” Fu-tong is the name of Tsang’s son. 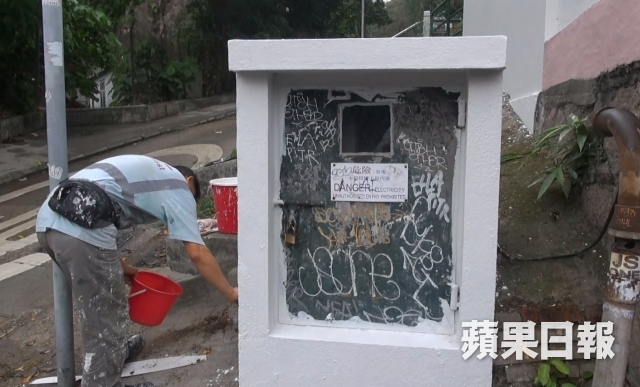 Another phrase on the box was “Tsui Lok House” – a reference to a nearby public housing estate building Tsang lived in.

Henry Chan Wan-hoi, a former Commercial Radio host who spotted the change on Monday, said Tsang’s work on the box had been there for decades.

“There is no use in complaining now. There is no turning back time,” he wrote. The playground has been closed by the Leisure and Cultural Services Department since late March for renovation works, but it was unclear who ordered the calligraphy to be painted over.

Joel Chung Yin-chai, a curator and a friend of Tsang, said he was surprised by the incident.

He told HKFP that the government’s Kwun Tong District Office was aware of the work and “had tried to keep it protected for years.”

Another piece by Tsang was only metres away from the electricity box, on a lamp post. But unlike the box, the lamp post had been covered with a plastic protective box.

Chung said the lamp post was managed by the government, but he was uncertain who was in charge of managing the electricity box.

He added that he had helped Google last year to make a virtual gallery of all of Tsang’s existing work on the streets: “The whole world will now know we whitewashed a piece of artwork without any reason,” he said.

In 2010, then-secretary for home affairs Tsang Tak-sing said that government departments had been reminded that contractors should not remove Tsang’s public ink writing.

Tsang was often arrested and charged for his graffiti work, but in many cases he was only given a small fine.

Some of the work left by Tsang was exhibited at the 50th Venice Biennale in 2003 – the first from Hongkonger to be featured. In 2013, a motorcycle that featured Tsang’s work was sold by Sotheby’s for HK$1.84 million. Another piece of work that has survived is on a pillar at Tsim Sha Tsui’s Star Ferry pier. It is also protected with a plastic box.

Tsang’s work on a wooden door of a theatre in Kwun Tong was acquired by the soon-to-open M+museum. The door was the property of utility company CLP Group, who were likely responsible for its preservation. The Times Museum of Guangzhou had planned for a commemorative exhibition of Tsang’s works in March but it was cancelled. Joel Chung claimed political reasons were behind the decision.

The museum told Stand News at the time that it had applied to the Department of Culture of Guangdong Province in January, but it had yet to receive approval in late February. It said that, as most exhibits were in Hong Kong, time was running out to set up the exhibition. It turned the project into a study and said it may be presented in the future in appropriate ways.

Beijing will also have a commemoration show later this year, according to Chung.

But Chung said moving Tsang’s work into museums was not the best way to demonstrate his legacy.

“Many exhibitions have already been put on,” he told HKFP. “We have to work on the academic side – with education on culture, to study and present it in multiple angles.”

HKFP has reached the Kwun Tong District Office and the Leisure and Cultural Services Department for comment.