Private owners are paying vastly inflated prices to have their estates repaired or renovated, according to a leaked government reference book. The estimated value of some projects is only 40 per cent of the price tendered, FactWire can reveal.

The reference book, effectively a schedule of rates for contracts from the Hong Kong Housing Authority, is used in government departments to prevent bid-rigging. It is not made available to the public. FactWire acquired the 2013 and 2014 edition, and hired an independent professional surveyor with 10 years’ experience to estimate the prices of three estate maintenance projects. 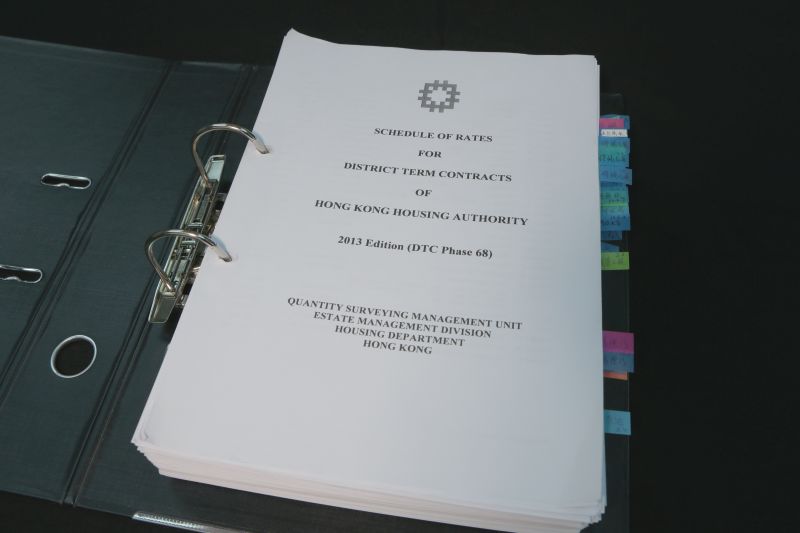 According to the valuation conducted by our independent professional the rated prices of two projects were only 40 per cent of the bid price. One was the notorious Garden Vista project, the estate at the centre of a HK$260 million bid-rigging case. The other is a maintenance project currently in progress.

This means that with limited knowledge about the market, owners paid more than twice what they should have done.

Informed sources with experience in drafting the reference book said the list, commonly known as “the Book”, is published by the Quantity Surveying Management Unit of the Housing Authority Estate Management Division.

The valuations are based on the prices of previous projects, and officials use it as a reference point when examining bids for public property construction projects.

The Book contains instructions and details about 28 types of construction work, including scaffolding, concrete, plumbing and painting. Running to 1,000 pages, it covers more than 15,000 project prices including labour and parts, along with standards for operation and supervision.

Sources further told FactWire that the Book went into detail about all types of government maintenance projects or minor construction contracts for contractors who participate in the bidding.

“Some project prices are higher than the market price, some lower,” the informed sources said.

FactWire started gathering building maintenance information for 200 estates or buildings in June. From this data, three estates or buildings with a complete collection of tender documents were chosen, from the New Territories, Hong Kong Island and Kowloon: Garden Vista in Sha Tin, Yue King Building in Causeway Bay and On Kay Court in Ngau Tau Kok. Our surveyor’s valuations were based on the prices from the reference book, as well as tender details and maintenance projects approved in the meetings of the owners’ corporations. He added 15 per cent on prices to represent a reasonable profit.

The results revealed a huge disparity between the tender price and his valuations for the first two estates.

The Garden Vista project in 2013 cost HK$263 million. A valuation based on its 11 sub-projects shows it was vastly overpriced. The surveyor estimated it should have cost HK$94.89 million, or HK$109 million with a reasonable profit.

This figure is 60 per cent less than the tender price submitted by contractor Hong Dau Construction Corporation Limited.

The largest portion of the cost involved mending the internal wall and tiling the external wall. While Hong Dau submitted a tender of HK$145 million, the Book shows that the actual cost would have been HK$57.33 million, 40 per cent of the tender price.

The “Water-resistant [work] at Phase 2” has an even bigger disparity. Excluding the rated price for a swimming pool and a tennis court, the water-resistant construction for the podium area cost HK$22.44 million, nine times more than the Book estimate of HK$2.4 million.

One contractor who surrendered to the Independent Commission Against Corruption (ICAC), Yau Shui-tin, was found guilty of bid-rigging in relation to the estate, and imprisoned. Around 20 others were arrested, including members of the management company, consultants, contractors and the owners’ corporation. Yue King Building in Causeway Bay, currently boarded up for ongoing maintenance work, also shows a disparity between the contractor’s tender price and the Book estimate.

Contractor Po Fat Construction Company Limited received HK$34.28 million in construction fees, but the surveyor’s valuation was HK$13.67 million including profit, according to the 2014 edition of the Book.

The surveyor told FactWire that there was a “prime cost rate” for many projects in the Yue King tender, meaning that contractors had to follow the consultant’s specification on the price of each material.

“For example, without specifying the quality, the tender includes using marble costing HK$1,800 per square metre for the ground floor lobby. However, the most expensive pure natural marble only costs HK$985 per square metre according to the reference.” Wealthy Gate Architects and Associates Limited, consultant on the Yue King Building project, issued a tender analysis report to owners last August, which contains a “grading level” for the tender price of each contractor. All 16 tender prices were graded as in the “reasonable range”.

However, the “reasonable range” refers to a margin of 15 per cent higher or lower than the average of the 16 tender prices. FactWire’s surveyor pointed out that this was meaningless because “there is no point in referring to the reasonable range when the prices may have been lifted beforehand.”

According to a letter from the owners’ corporation of Yue King Building to its owners last September, the management committee picked four out of 21 consultant tenders for interview after the maintenance project was approved in 2013. The letter did not mention any criteria for choosing consultants, and all members of the management committee agreed to Wealthy Gates as the consultant, and a consultancy fee of HK$180,000.

See also: Bid-rigging and other abuses in Hong Kong are caused by weak laws, feebly enforced

A similar procedure was used to select a contractor.

Both had previously submitted a tender for the Garden Vista project.

Of the three projects examined, On Kay Court’s Book valuation was nearest to the tender price.

With Paus Architects Building Maintenance Consultants Limited as the construction consultant, the project was approved during an owners’ meeting last September, and is in the process of selecting contractors. So far 36 construction companies have submitted tenders, with costs ranging from HK$60.23 million to HK$81.15 million. Our valuation was HK$63.71 million. Although the price disparity was not so great in the case of On Kay Court, there was concern that the tender content was too simplistic.

Rather than merely listing the price of the project as a whole, costs should be specified for each sub-project, our source said. The ground floor lobby renovation project, for example, should break down the process into actions, such as demolishing existing facilities, debonding tiles and trimming walls, designing, selecting materials and retiling. However, only the total cost is found in most tenders.

The source said: “A good tender should list out separately and in detail the pricing and requirements of construction. Aside from allowing owners to calculate the prices on their own, it also prevents conflict in the later supervision process.”

“A minor tweak in the prices of the sub-contents, such as the raw materials or the order and method of construction procedures, could result in a big change in the price.”

“Should the prices inflate sharply, conflicts would arise. If the construction does not correspond to the description, owners could seek compensation by referring to the details provided in the tender.”

The tenders of all three projects examined by FactWire shared the problem of a lack of detail. This situation made it easier for contractors to submit similar prices, the source said. 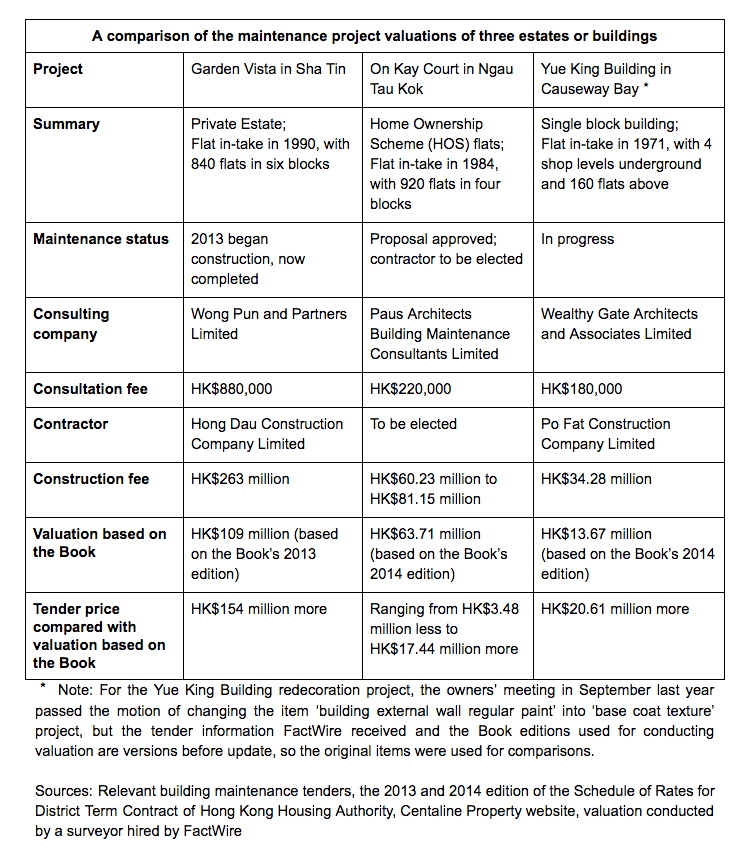 The source added: “Despite the fact that the tenders seemed to be filled with words, the instructions concerning pricing were written ambiguously, which makes valuation difficult. Thus, we have to refer to the completed construction to estimate the price.”

Bid-rigging, price exaggeration and construction not matching initial descriptions are three different problems, sources emphasised. The cost is not the only measure of a project. The three situations could appear separately or at the same time, but in every case, the owners would be the losers.

The Property Owners Anti-Bid Rigging Alliance spokesperson Chiu Yan-loy, who acquired the 2013 edition of the Book and passed it to FactWire, said its assorted data had been compiled from thousands of official contracts on public housing, home ownership schemes and home-purchased property.

“The departments knew that the construction cost could easily be affected by bid-rigging, and thus published a valuation reference to avoid bid-rigging for government projects.”

“Aside from officials responsible for procurement or dealing with construction contracts, some outsourced contractors also knew about the existence of the valuation reference. It’s just that it was never made known to the public.”

Chiu said the document had been provided by an official who hoped the maintenance market could return to normal. Chiu quoted the official as saying that government maintenance projects were similar to those in private estates. Officials would refer to the valuations stated in the reference to assess whether prices submitted were reasonable or not. If price disparities were too big, officials would use the Book to negotiate. If they suspected bid-rigging, they could even call for tenders again.

The Alliance and industry representatives have been urging the government to provide a proper valuation reference to assist owners.

In 2015, the ICAC commissioned the University of Hong Kong to build a database based on maintenance prices provided by the government scheme “Operation Building Bright (OBB)”, where owners could input the total number of flats and floors to get a rough estimate of costs.

However, the database only contains details of less complicated projects such as external walls and drainage channels.

Prior to 2009, the Building Department published a “Building Maintenance Guidebook” to help owners. The guidebook includes price references and case analyses, but the data has not been updated since 2001.

In 2014, then Secretary for Development Paul Chan Mo-po replied to enquiries in the Legislative Council alleging that the Buildings Department – as a law-enforcement agency – collects limited data, and that the estimated values of governmental projects with repair orders would differ greatly from the maintenance projects of private estates. Chan recommended citizens to refer instead to the suggested prices issued by professional organisations such as the Hong Kong Institute of Surveyors. Chiu said, however, that a lot of private estates which do not meet government funding standards have yet to receive such assistance, and that the independent valuation does not include references for sub-project prices. Rather, it provides the percentage difference with the valuation conducted by consultants, which does not help much, according to Chiu.

“Owners have no idea as to which government-sought consultant conducted the valuation and the prices they referred to.”

Chiu urged the government to publicise the Book since owners could easily be victims of bid-rigging without knowing the reasonable tender price. He added that the Book would help owners to protect themselves and that “bid-rigging would not be as rampant if the government made this information known to the public.”