The China Liaison Office Director Zhang Xiaoming may soon be removed from power following the surprise announcement from Hong Kong’s leader Leung Chun-ying on Friday that he would not seek a second term, the pro-Beijing Sing Pao newspaper has claimed.

The Chinese-language newspaper has been running anonymous commentaries since August attacking Leung and the powerful Liaison Office, Beijing’s organ in Hong Kong. It has accused Zhang and Leung of teaming up to destabilise the territory and expand their political syndicate with the tacit approval of senior Chinese official Zhang Dejiang, an ally of ex-leader Jiang Zemin and rival of Chinese President Xi Jinping. Sing Pao has been hinting that Xi is preparing to eradicate a powerful section within the Communist Party. It wrote that Leung would not be allowed to seek a second term two days before the chief executive’s announcement. It also published a veiled warning in October demanding Zhang Xiaoming explain himself to Beijing, or his ties to Beijing would be cut.

‘Reshuffle in the Liaison Office’

On its front page on Sunday, Sing Pao said that Zhang Xiaoming will soon be stripped of power. His last-minute notice on Friday – the day that Leung announced his decision not to seek re-election – to the Hong Kong Brands and Products Expo that he would not be attending Saturday’s opening ceremony is a sign, the paper claimed. 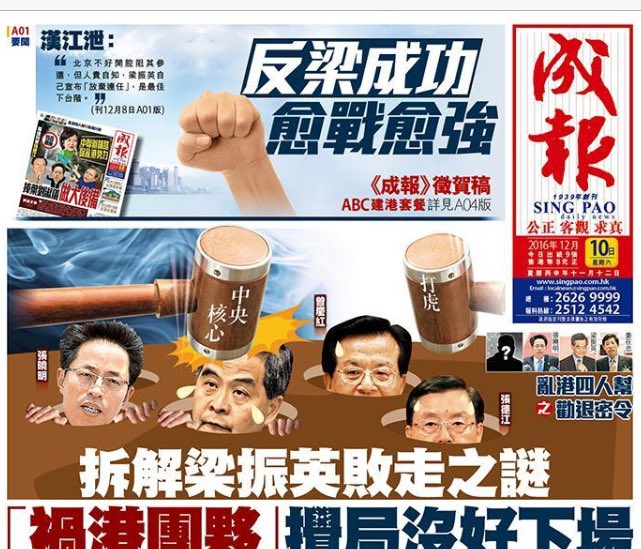 Zhang attended the Expo’s opening ceremony with Leung over the last two years, but the Chinese official was absent at this year’s event. “As a team, Zhang and Leung share the same fate – Zhang must have known that he would hit a dead-end by betting on Leung,” it wrote.

“The core of the central government’s move to strike out CY Leng is basically to destroy Zhang Dejiang. The China Liaison Office will likely see a reshuffle.”

The paper said that the Liaison Office supported Leung’s decision to challenge the oaths of several pro-democracy lawmakers when the central government showed an interest in mending the relationship with Hong Kong’s pro-democracy camp by issuing home return permits to politicians without them. “The Office’s move is akin to messing around,” Sing Pao wrote. “Zhang Xiaoming, who has close ties with CY Leung, will definitely have to bear responsibility.”

The CCDI released in October a report on the Hong Kong and Macau Affairs Office, laying out problems related to the Office’s work such as questionable promotion procedures and unsatisfactory practices in deploying personnel. Calling the report a breakthrough, Sing Pao said that corrupt officials would typically be removed following the CCDI’s investigations. It claimed that the corrupt political syndicate in Hong Kong was formed during the tenure of retired senior official Liao Hui, who led the Hong Kong and Macau Affairs Office between 1997 and 2010.

Sing Pao said last Thursday that many people have been trying to persuade the Zhang Dejiang camp to give up on Leung and endorse the “backup option” of lawmaker Regina Ip of the New People’s Party. Ip is expected to announce her candidacy on Thursday.

The paper said that the Liaison Office helped Ip and her party rise in power, and it had recently decided to endorse Ip instead of Leung in an effort to ensure that Hong Kong’s next leader would continue to obey the Office and appoint senior officials that it has close ties with.

sing pao is having literal champagne showers at the demise of CY Leung pic.twitter.com/GHNj5inUdT

Sing Pao is not the only newspaper that predicted Leung’s fall. The Epoch Times speculated in mid-October that Beijing would not back his re-election. It ran several more stories detailing the rumour, such as Xi’s strong stance against Leung, who it says belongs to the camp of ex-leader Jiang.

After CY, China Liaison Office director is next for the chop, triumphant pro-Beijing paper claims