Organisers say 13,000 people attended a rally on Sunday in protest of Beijing’s decision to step into a row over whether two localist lawmakers should take their seats in the legislature. Police say 8,000 attended at the rally’s peak.

#HongKong protesters arriving now at end point, half clad in black.
One protester shouts that One County, Two Systems was a lie. pic.twitter.com/HB3B9hAu6P

The demonstration came days after a judicial review brought by the Hong Kong government was heard at the High Court. The authorities are seeking to disqualify Youngspiration’s Yau Wai-ching and Baggio Leung from LegCo after they held a flag reading “Hong Kong is Not China” during their swearing-in session and modified their oath using the word “Chee-na” which some deem offensive to Chinese people. 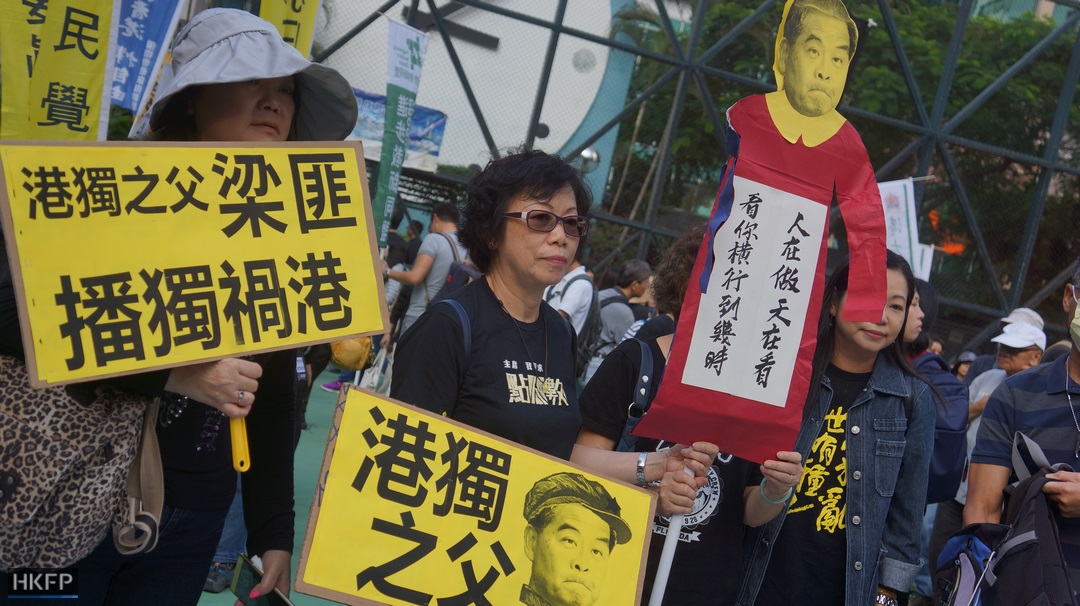 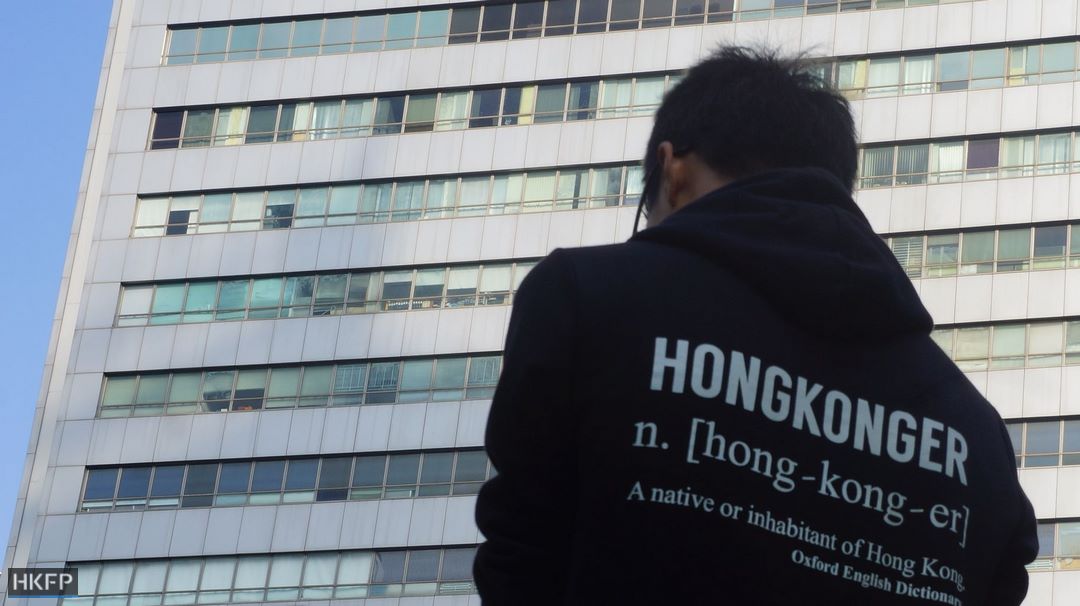 On Friday, the Hong Kong government confirmed that Beijing would discuss handing down an interpretation related to Article 104 of the city’s mini-constitution, the Basic Law. The article concerns how officials, judges and lawmakers pledge allegiance to Hong Kong as a part of China. 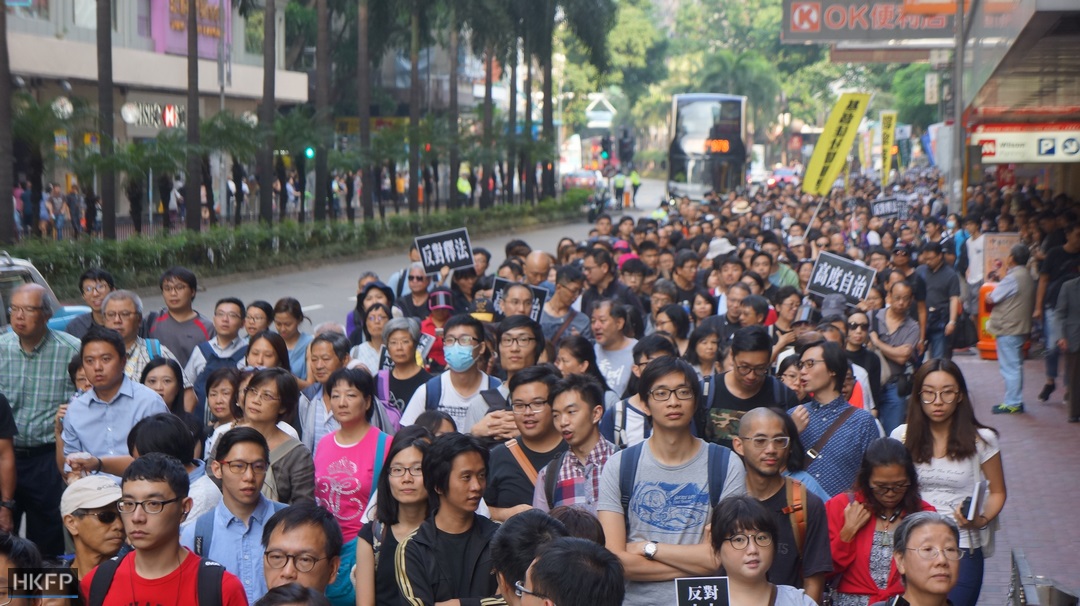 The ruling by China’s National People’s Congress Standing Committee (NPCSC) is expected to be handed down on Monday. 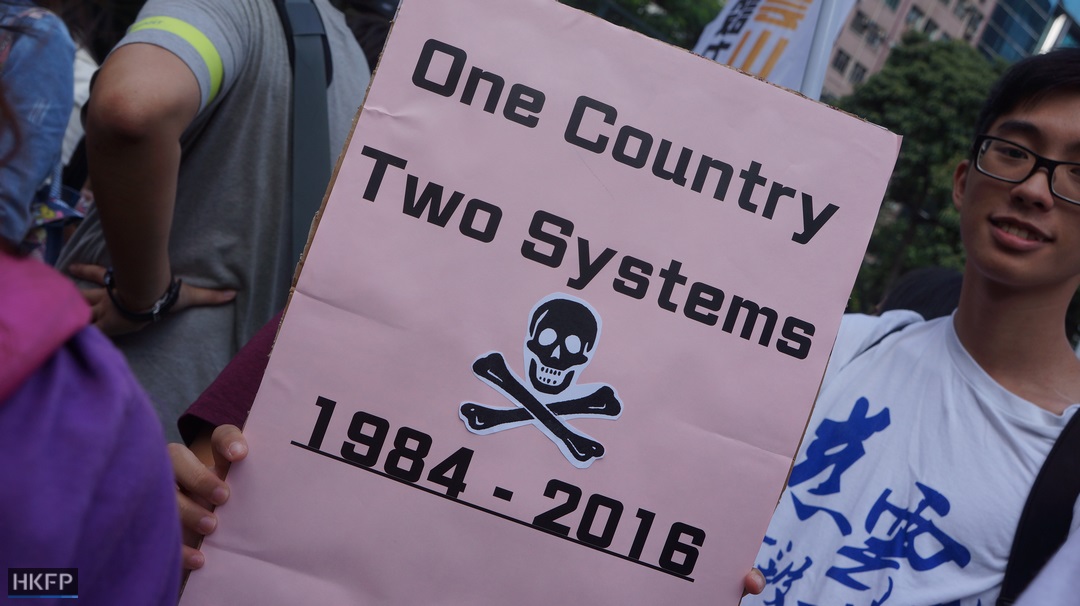 Demonstrators, many clad in black, marched from Wanchai to the Court of Final Appeal led by the Civil Human Rights Front. 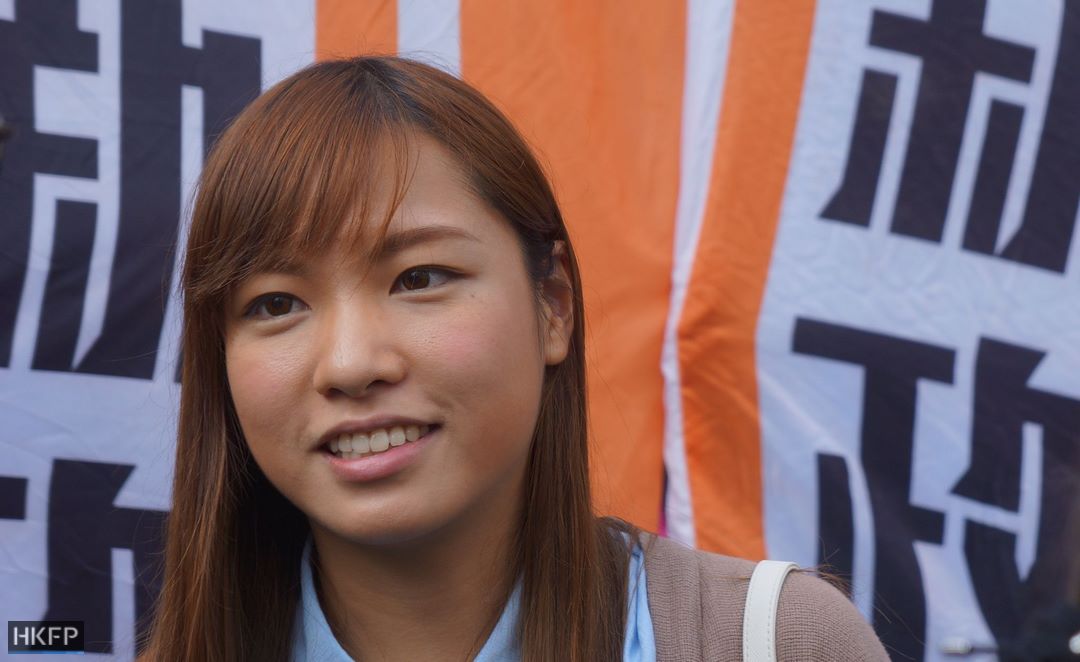 “We think that the Beijing government wants to destroy the commitment between Hong Kong and [the] PRC government,” Youngspiration’s Yau Wai-ching told HKFP, adding that she had no regrets over the oath-taking incident.

“The PRC government… have the right to make their choice but they choose to solve the problem this way.” 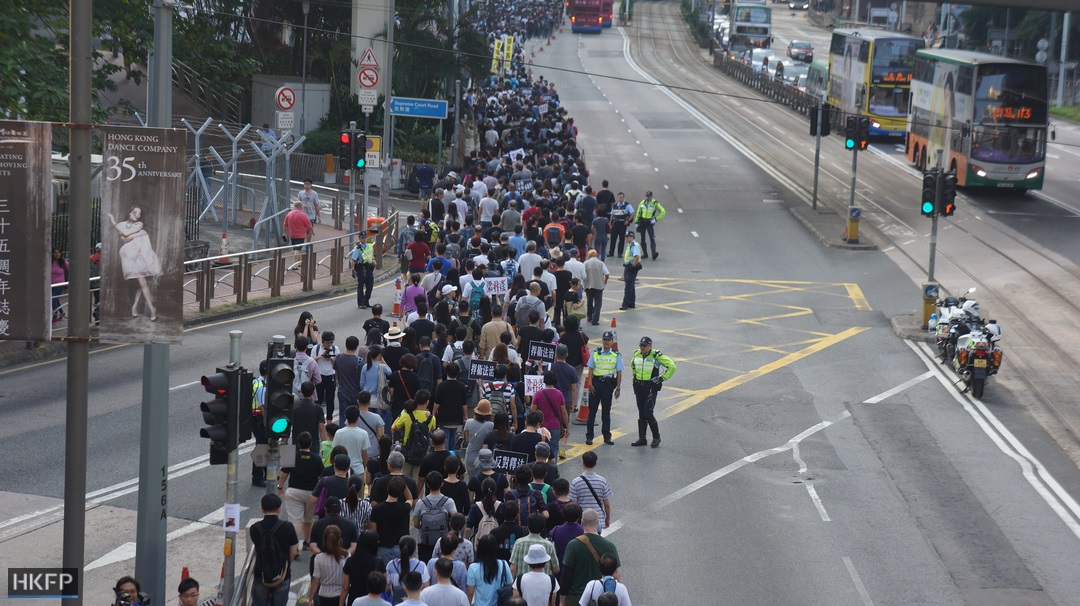 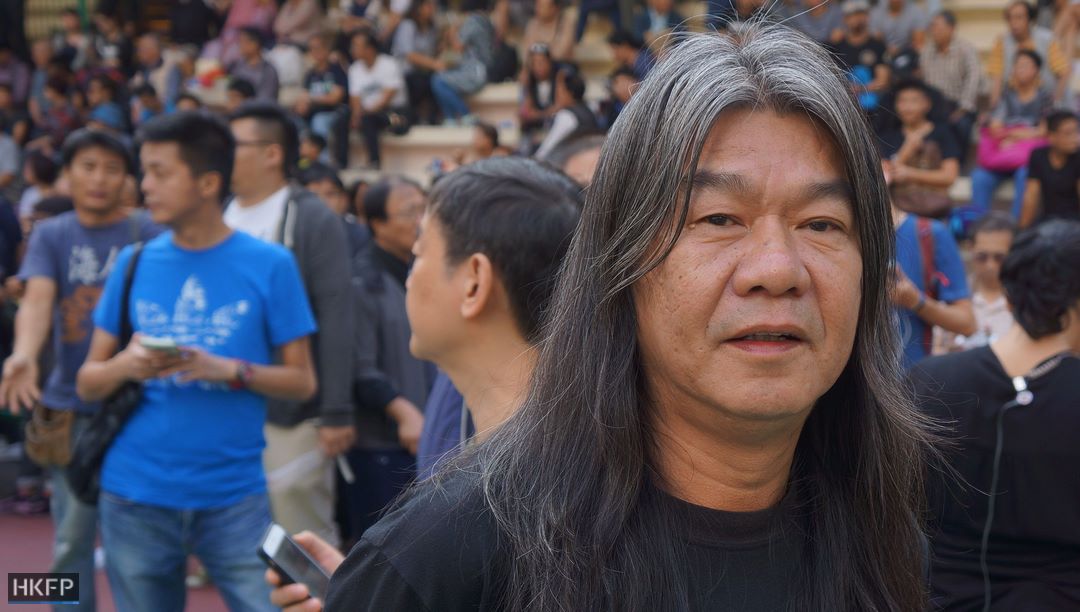 “The objective is very simple – to try and stop them [Yau and Leung] from being active in politics in Hong Kong.” Though he added that he was willing to wait and see what Beijing had to say. 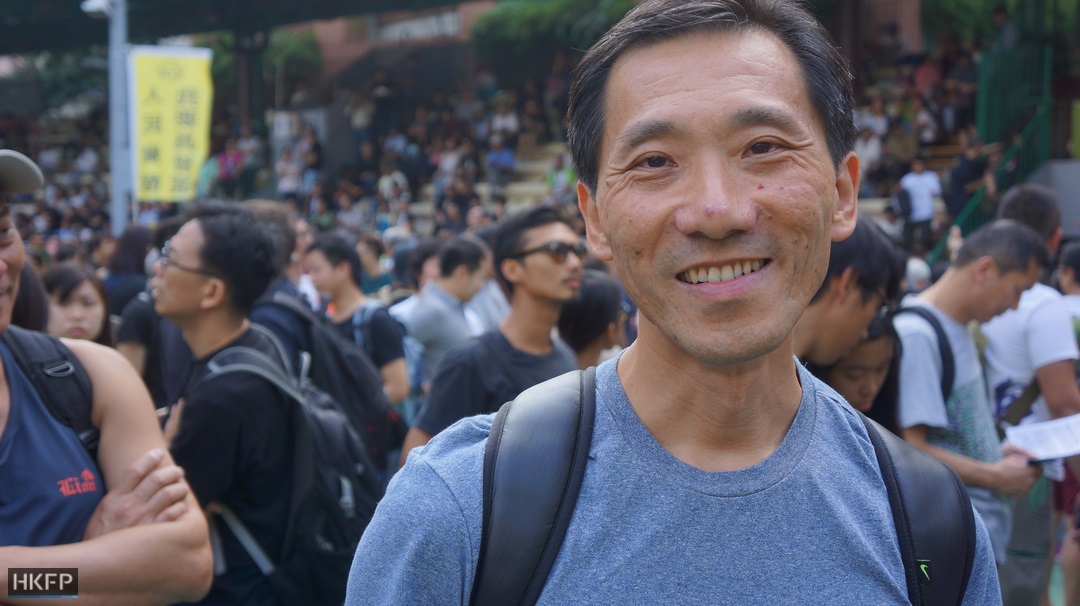 Edward Yiu Chung-yim, representing the Architectural, Surveying, Planning and Landscape functional constituency, added the phrase “for democracy and for Hong Kong’s sustainable development” to his oath. He told HKFP that he did not think any interpretation from Beijing would affect his status as a lawmaker, as such rulings cannot be applied retrospectively.

“I did not edit, I just finished 100 per cent, word-by-word of my oath – after that, I spelled out my political stance – that’s it,” he said. 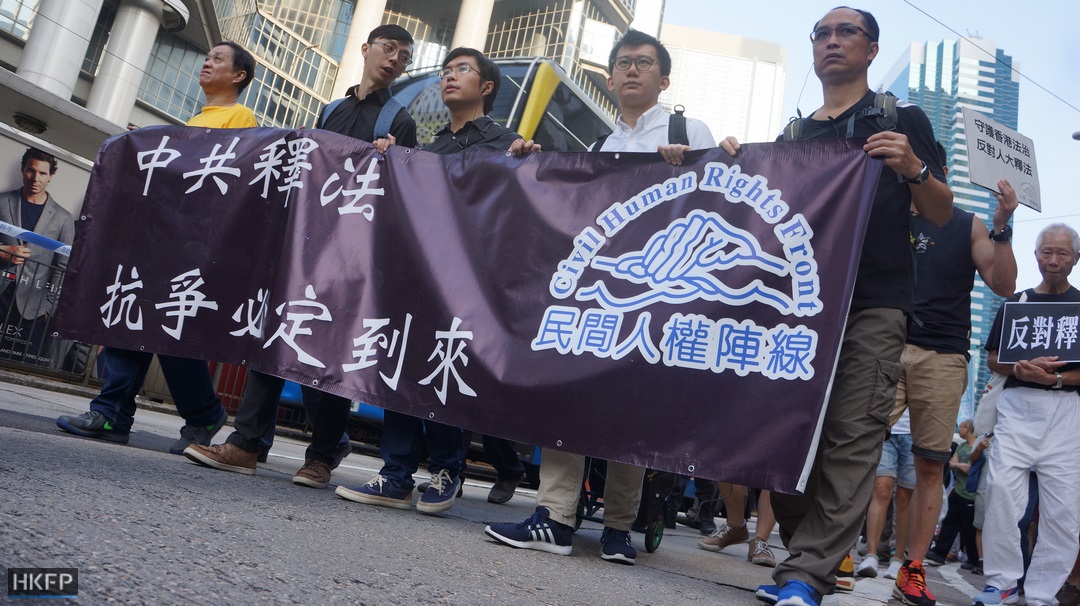 The announcement on Monday will mark the fifth time since the 1997 handover that Beijing has interpreted Hong Kong‘s constitution. 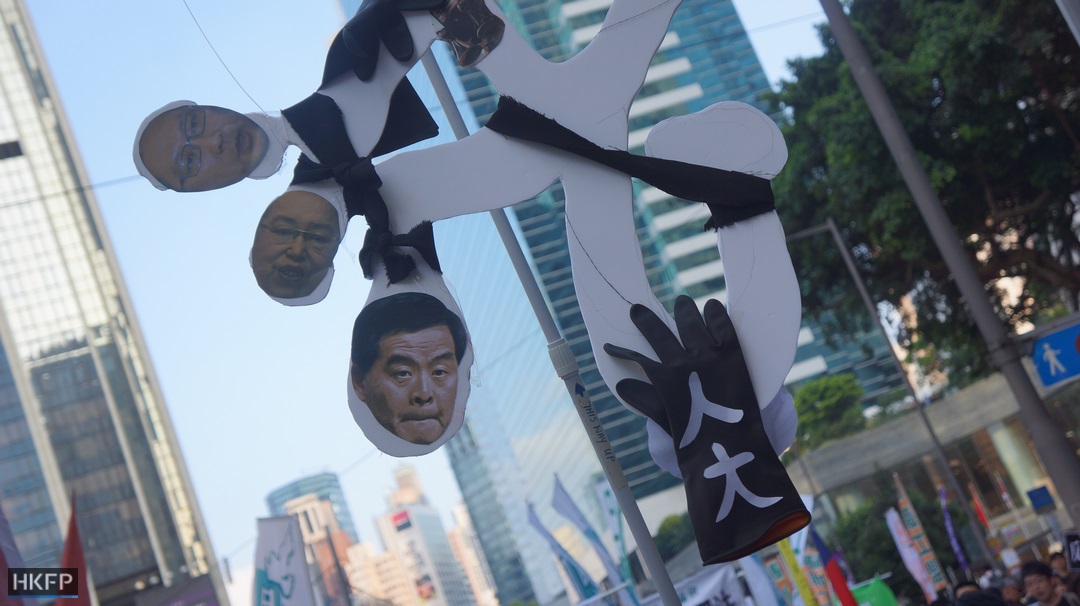 As the march passed through Wan Chai, demonstrators exchanged insults and jeered as pro-China counter-protesters from the Defend Hong Kong Campaign rallied around two dozen supporters.

Boos and rowdy scenes as pro-Beijing counter-protesters face off with demonstrators. pic.twitter.com/01QWlLP2fR

“They obviously insulted all of [the] Chinese people around the world – we obviously can’t accept that… we don’t need to make it so complicated, they should be out [of the legislature] right away,” pro-China protester Vince Leung said.

“Ever since Occupy Central, Hong Kong’s economy has been going down,” he added. “People from China don’t want to come here as a tourist, where our tourist industry is so dependent on mainland China – now so many people don’t want to come because of this. They’re just sick and tired of this.” 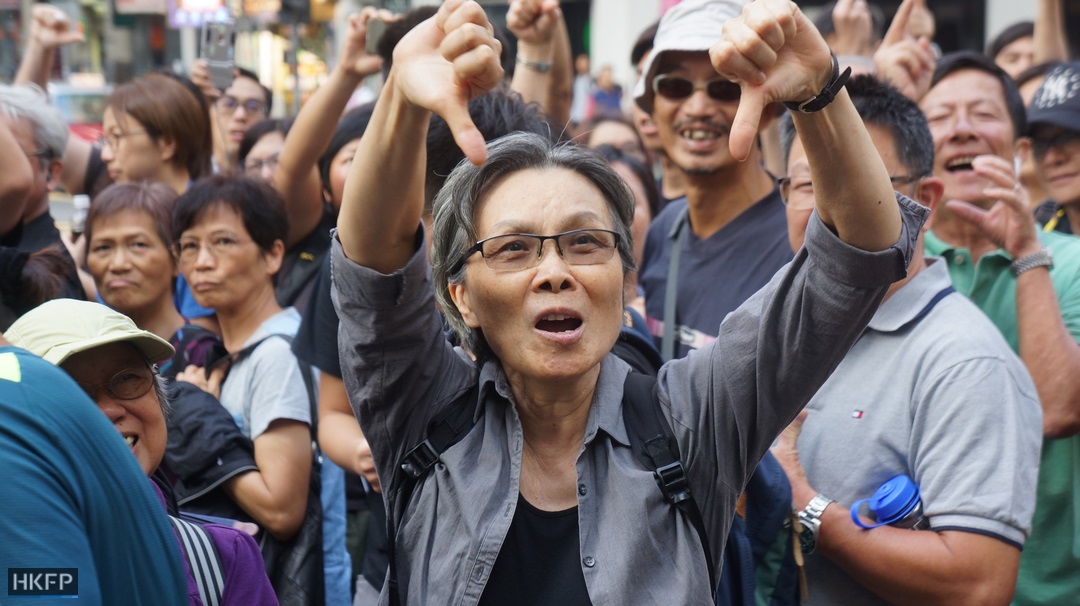 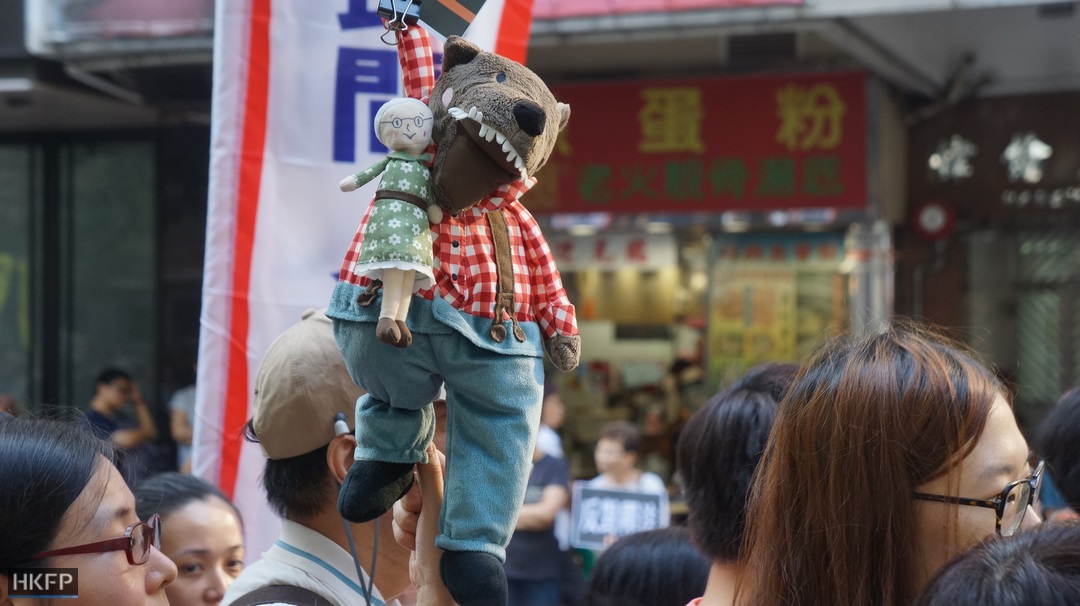 Wilson Leung, spokesperson for the Progressive Lawyers Group, said: “Every time they interpret our Basic Law, they infringe on our judicial independence and One Country Two Systems. But this particular case is especially horrible. In the previous four cases, the NPC at least waited until we had a ruling in our own courts, then they would interpret the law. But now, they’ve skipped it. Thus, this sets a very bad precedent.” 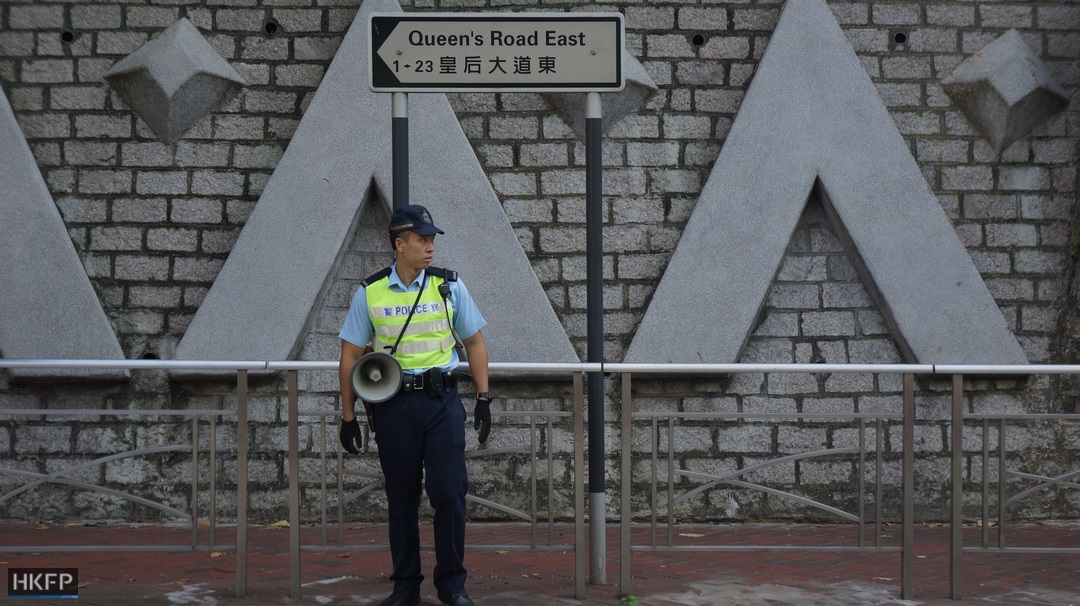 Patrick, a 49-year-old attendee originally from Britain said: “[T]his is a very new, serious development. Because what they’ve done is that, right up front, very loud and clear, very explicitly, there is no more One Country Two Systems. They’ve invaded our judicial independence. It is the end of the last 19 years of pretending we are not a part of China.” 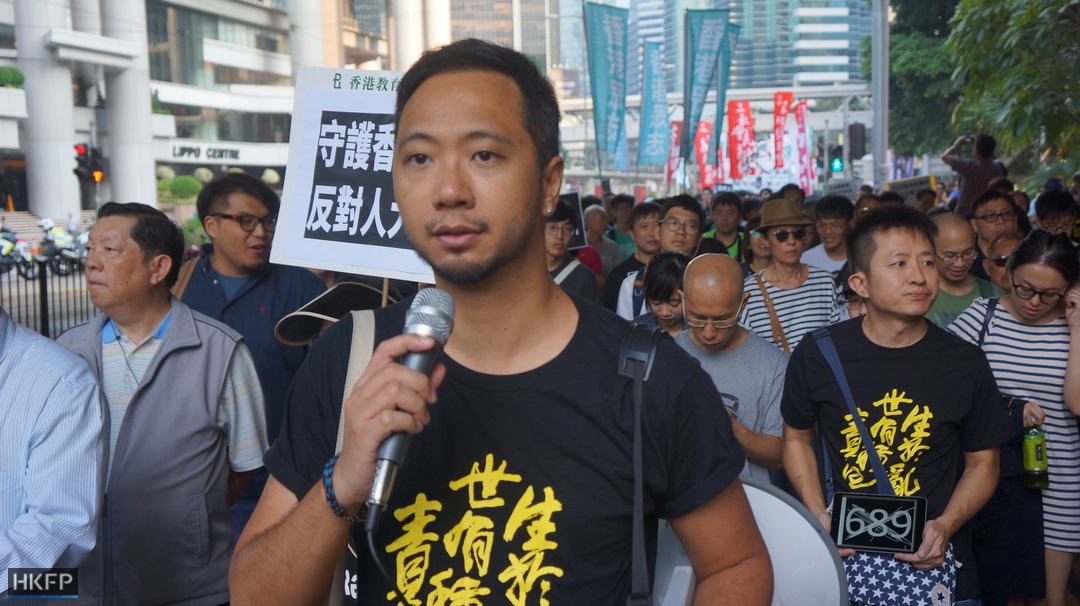 Activist Ken Tsang said that the upcoming ruling “means Hong Kong people cannot trust the court, cannot trust rule by law any more. We used to have a really civilised and trustable system… but once they break it, they can elaborate [on] the law themselves, however they want.” 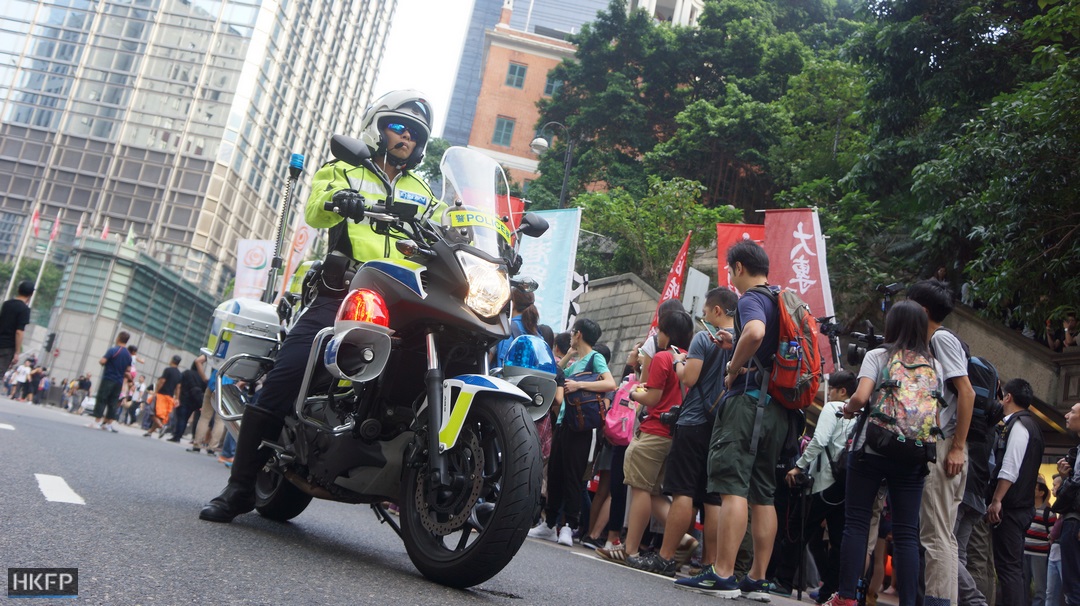 As the march neared its end point, activists from the League of Social Democrats, People Power and Demosisto urged protesters to press on to the China Liaison Office in Sheung Wan. 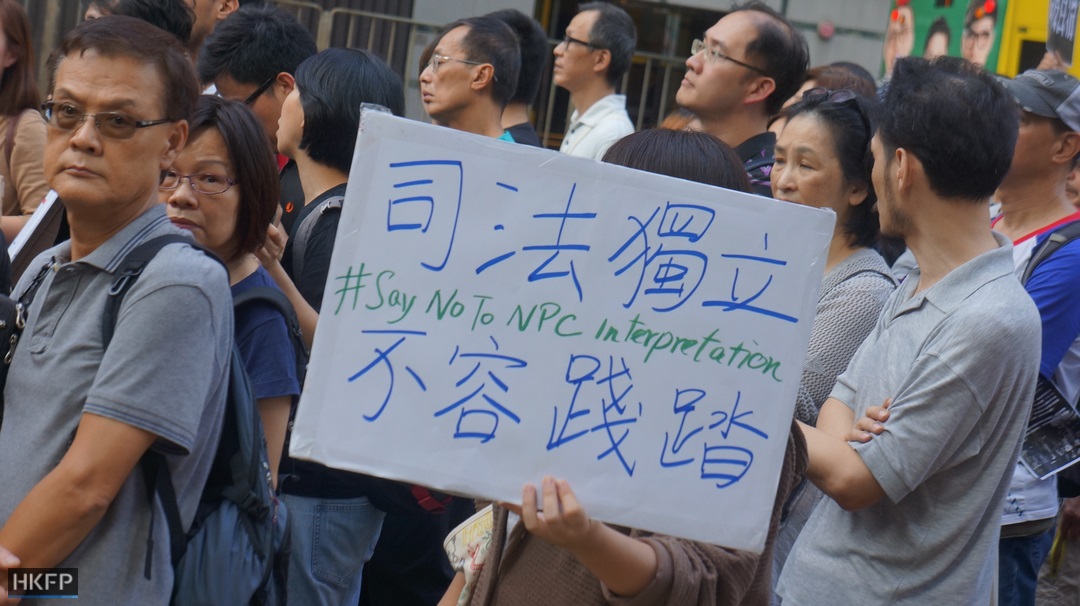 Demosisto’s Agnes Chow was among those encouraging demonstrators to make the detour. 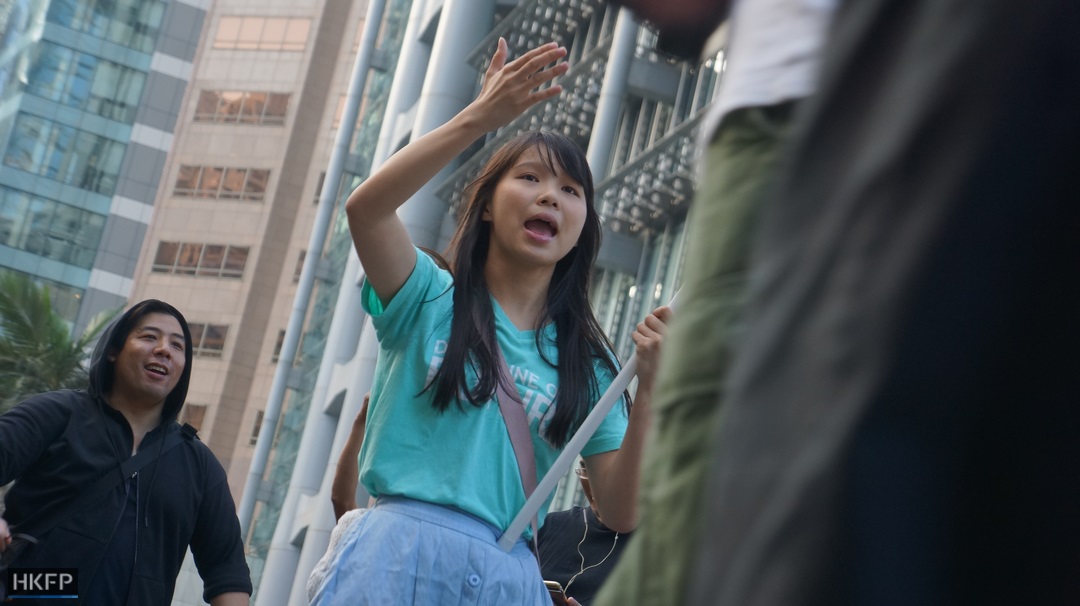 “The people who damaged our rule of law is the Chinese government… this is obviously a civil disobedience action,” she said.

Most protesters proceeded to Statue Square, Admiralty, where organisers held a forum.

Independent localist lawmaker Lau Siu-lai, whose oath was also initially rejected, said she was not concerned about Beijing’s possible intervention affecting her. 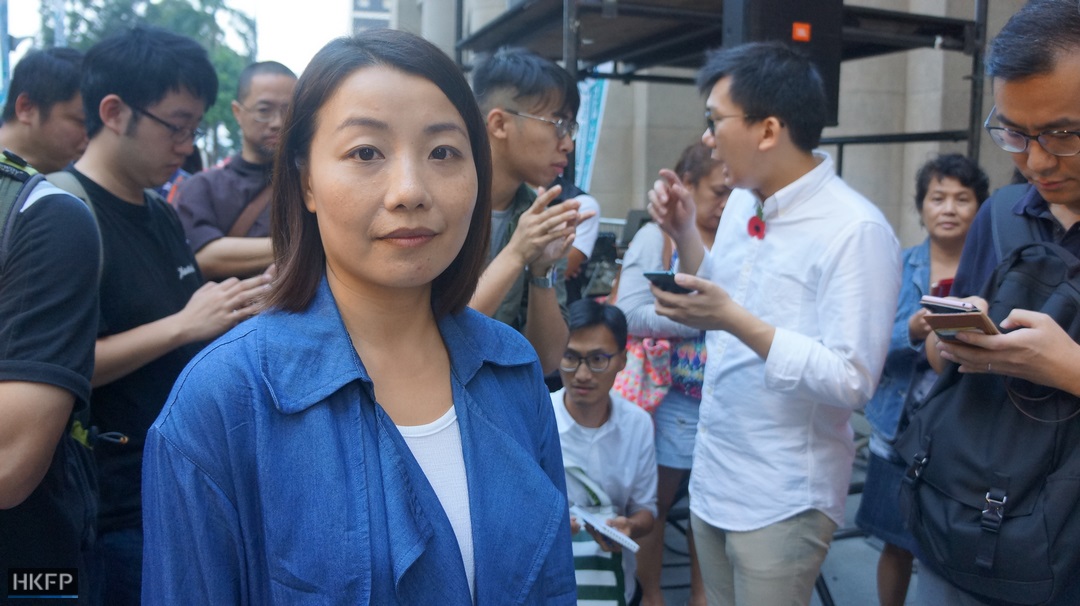 “My concern is about the reinterpretation of the law, the Basic Law, that threatens all Hongkongers,” she told HKFP. “My concern is focussed on this impact rather than my fate.” 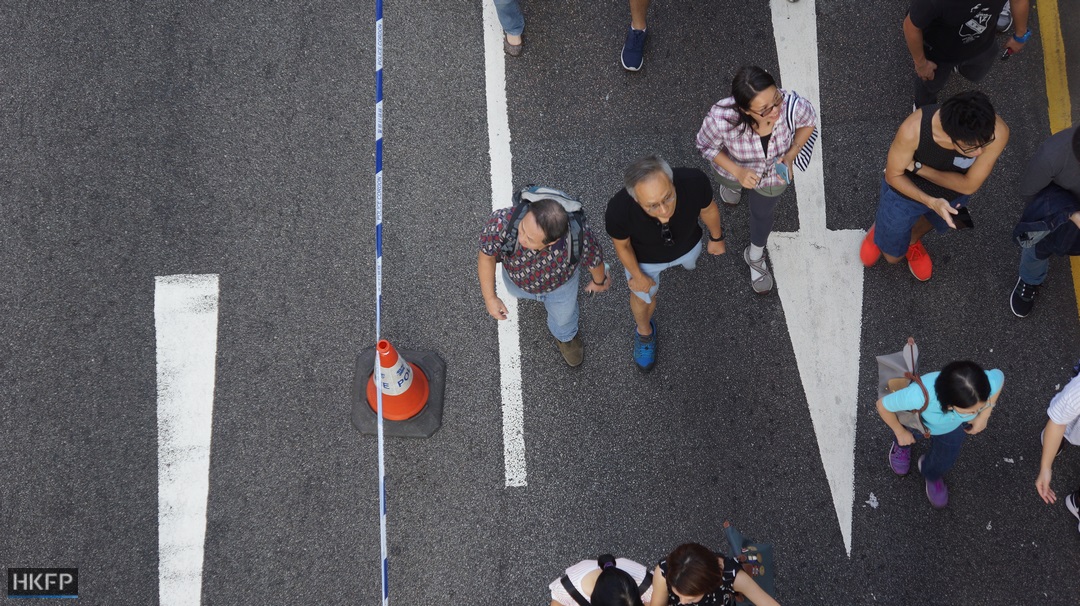 A separate protest by the legal sector is set to take place on Tuesday.

'There is no more One Country Two Systems': Thousands rally against Beijing's intervention in oath row