University of Hong Kong student Printa Zhu Ke will not face investigation over a bribery allegation because the university’s governing council considered the amount involved to be “immaterial,” Ming Pao has reported.

Zhu, who is from mainland China, was embroiled in a bribery scandal after his opponent Michael Mo Kwan-tai revealed materials that allegedly showed Zhu buying votes from classmates in his bid to become the postgraduate student member of the HKU Council. Mo reported the case to the school and the Independent Commission Against Corruption last week. The HKU Council announced on Wednesday that Zhu was elected as the postgraduate student representative with a voter turnout of about 10 per cent. Zhu also won the election last year.

The Council did not disclose the details of its decision not to investigate Zhu. A source told local newspaper Ming Pao that the Council decided by a 9:7 vote to dismiss Mo’s complaint on the basis that the amount – totalling RMB80 – given out by Zhu was “immaterial.”

The source told Ming Pao that most of the Council members who voted against Zhu were HKU members, while those who voted for Zhu were appointed from outside the school. Under Hong Kong law, the chief executive has the power to appoint one-third of HKU Council members.

HKU Vice-Chancellor Peter Mathieson confirmed to Oriental Daily on Wednesday that the leaked information was accurate. 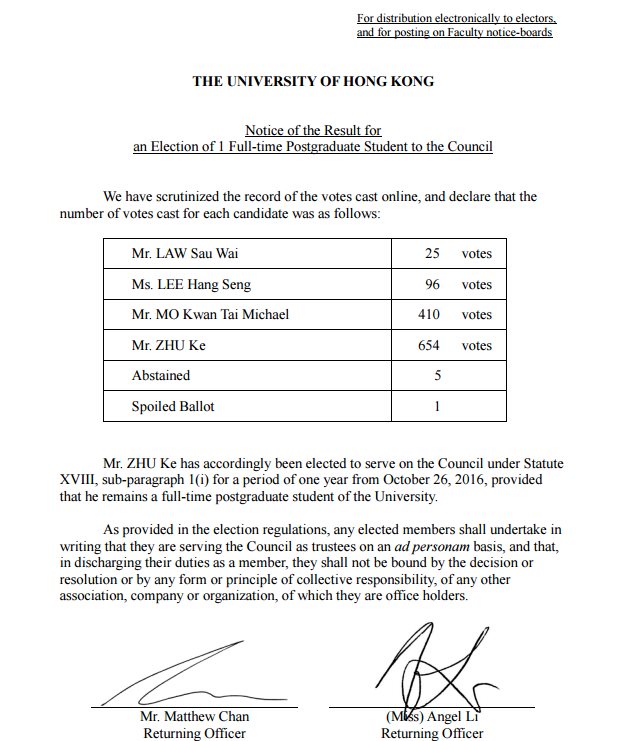 Last week, Mo revealed screenshots that allegedly showed Zhu sending out his campaign details and distributing virtual red packets containing money to his classmates via the messaging app WeChat. In some screenshots, after Zhu posted his campaign poster and red packet in a group chat, several members told him that they had voted and one asked for the link to vote online.

Zhu responded that the money was to reimburse those who had helped with campaign promotion. He uploaded screenshots of his red packet account, which showed that the amounts transacted were all below RMB2.

HKU Student Union leader Althea Suen, who sits on the Council as the undergraduate representative, said that the most important factor should not be the transaction amount, but whether Zhu’s conduct has affected his integrity, the fairness of the election process, and the university’s reputation.

She added that it is inappropriate for the Council to arrive at a decision by vote before fully investigating the case.

Mo told HKFP that the Council’s decision to not hold a hearing before voting is a “political way” to resolve a legal matter. “[This] is wrong in my opinion,” he said. Michael Mo in front of the ICAC. Photo: Jessica Leung.

“I think this is a starting point of HKU’s legitimisation of election bribery at the governance level,” he said. “If it’s not corrected, I’m sure it will become a norm in the near future.”

Zhu could not be reached for comment. He said earlier that his opponent had tried to gain publicity by stirring up sensational stories.

Barrister Chris Ng of the Progressive Lawyers Group told HKFP that the HKU Council’s decision is reasonable because Zhu may have a strong defense for two reasons: first, Hong Kong’s ordinances do not cover this type of alleged bribery. Second, there are common law cases in which a gift of insignificant value was considered not capable of “influencing” voters, thereby failing to establish the act of bribery.

“But even if it may be permissible by law, it doesn’t always mean it is morally acceptable,” Ng said. “Zhu was lucky this time, but this kind of behaviour should not be encouraged.” He gave the example of a mainland Chinese businessman who was jailed for six months in September after trying to bribe an HSBC employee with a bottle of perfume. The magistrate said the mainlander brought “undesirable culture” to Hong Kong, which must not be encouraged.

Ng said he agrees with the magistrate on the matter. “Especially since there are a lot of cross-border businesses, it is necessary to let [mainland Chinese] know that an important core value of Hong Kong is integrity – in both public and private sectors,” he said.

He added: “Schools should hold students to a higher standard. HKU should condemn Zhu’s conduct and follow up with the matter strictly according to the regulations.”

The governing council system in Hong Kong has for years been criticised for being susceptible to political influence due to the law which stipulates that the chief executive is the chancellor of ten universities and can appoint outside members to the councils.