The term ‘kowtow’, an adaptation of a Chinese phrase, means, according to Wikipedia, “the act of deep respect shown by prostration, that is, kneeling and bowing so low as to have one’s head touching the ground”.

In contemporary international diplomacy towards China, the definition has been taken even further. The kowtowing of too many governments and other international actors, from universities to Hollywood, towards the thuggish regime in Beijing has resulted not just in tongues licking the boots of the Chinese Communist Party, but tongues then being trapped beneath those boots and thus shamefully silenced. 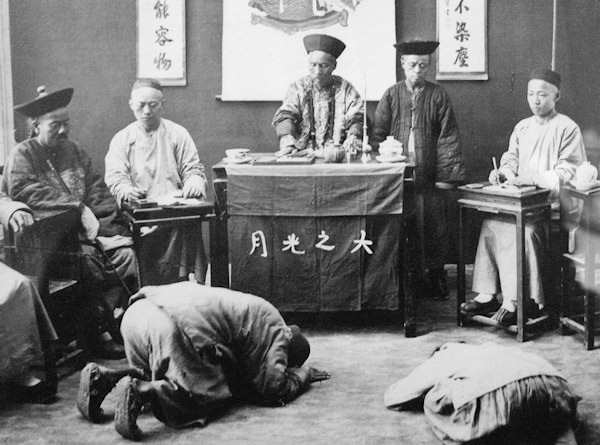 The decision by the Deputy Prime Minister of New Zealand to cancel a meeting with Hong Kong’s elder statesman, founder of the democratic movement Martin Lee, and former Chief Secretary Anson Chan, was shameful – and that is putting it diplomatically. Cancelling a meeting with two such eminent, distinguished individuals, to avoid offending Beijing, is the epitome of cowardice. Bill English should hang his head in shame, for prostrating himself so blatantly towards the criminals in Beijing and abandoning those who champion democratic values. Similarly, representatives of the medical profession who gathered recently in Beijing and lapped up the regime’s absurd assurances in response to allegations of forced organ harvesting should consult their fellow professionals who specialise in psychiatry. The evidence for the allegations of forced organ harvesting of course must be further tested, probed, questioned. But that does not mean that China’s response should be accepted carte blanche, as it was by the foreign doctors who went to Beijing and by the Minister of State at Britain’s Foreign and Commonwealth Office Sir Alan Duncan, in his ludicrous response to a recent debate in the House of Commons on the subject. Taking Beijing’s word for it seems to be the ultimate in tooth fairy stories and goblins at the end of the garden. You think Christians, Falun Gong practitioners and Tibetan Buddhists are wacky in their spirituality? Try those who trust China.

Britain’s David Cameron and George Osborne went way overboard in their fawning subservience to China, as the Conservative Party Human Rights Commission’s report, titled “The Darkest Moment: The Crackdown on Human Rights in China 2013-2016”, detailed. Theresa May indicated a new caution, though in the end she bowed to pressure and approved Hinkley Point, a sad day for Britain. Canada’s Justin Trudeau is like a desperate teenage lover slobbering over his uninterested girlfriend. Vancouver even put up Chinese Communist flags to prove Justin’s undying love. How low can one go? As long as lawyers are harassed, intimidated, monitored, followed, detained, locked up; as long as Christian crosses and churches are torn down; as long as Uighur Muslims are told crudely that they can’t grow beards or fast during Ramadan; as long as Tibetan Buddhists find their culture decimated; as long as Falun Gong practitioners are beaten, jailed, slaughtered; and as long as Falun Gong practitioners and others are cut open, their vital organs stolen and sold to others, and as long as there is no international, independent scrutiny of China’s organ transplant system, and no international inquiry into China’s crimes against humanity, I do not trust what China says.

So the solution? All of us, around the world, must stand up to Beijing. Enough of kowtowing. As Stein Ringen in his new book The Perfect Dictatorship puts it, “it is a bullying state – towards neighbours and towards anyone who causes it grief, even in small matters”. He notes that ahead of Premier Li Keqiang’s visit to Britain in 2014, his planners complained to Downing Street that the intended red carpet for his arrival was “three metres too short”. That sums up the obscenity that is China today, and that is the international community’s relationship with it. And it is wrong. Only Queen Elizabeth II got it right. China is a bully, and the only way to handle bullies is to stand up to them. It’s time now to end the kowtow. It’s time to stop the boot-licking. It’s time to extract the tongue – carefully, gingerly, diplomatically so that it is in one piece – from underneath the boot. And it’s time to speak up. It’s time to say to China, as Germany’s Angela Merkel has, we want to trade with you, yes; we want to talk to you, yes; we recognise your growing influence on the world stage, yes. But, to be taken seriously as a global player, stop messing with freedoms in Hong Kong; stop jailing lawyers and dissidents; stop censoring the Internet and the media; stop chopping off Uighur Muslims’ beards; stop beating up Tibetan Buddhist monks; stop smashing Christian crosses and jailing Protestant and Catholic clergy; stop beating and jailing and torturing Falun Gong practitioners whose only crime is to believe in truthfulness, compassion and forbearance; and stop ripping out the hearts, kidneys, livers, lungs and other vital organs of living prisoners of conscience and executed prisoners – and open up your jails and hospitals for the world to see you have stopped.

That’s what we should say to China. The world should meet Anson Chan and Martin Lee. The world should meet the Dalai Lama. The world should meet representatives of the Christian, Falun Gong, Uighur and other communities. The world should meet jailed Nobel Laureate Liu Xiaobo, the brave lawyer Gao Zhisheng and the blind activist Chen Guangcheng. The world should call for the release of Gui Minhai, one of the five Hong Kong booksellers abducted by Chinese agents in Thailand a year ago. And the world should then re-think, recalibrate its relationship with Beijing, and act accordingly. As James Macgregor said on BBC Radio 4’s Today Programme, “If you act like panting puppy the object of your attention is going to think they’ve got you on a leash. China does not respect people who suck up to them.” Carpe diem; stop the kowtow.