In the coming weeks, the Minimum Wage Commission is due to submit its recommendations on reviewing the Statutory Minimum Wage rate, following the public consultation process that ended in May and meetings between labour advocacy groups and employers’ organizations.  Recently, Stand News reported that negotiations have reached an impasse, with workers pushing for an increase to $36 – $41, while employers have expressed opposition to anything more than a 50 cent rise.  The current minimum wage is $32.50 per hour, a rate which took effect in May 2015.

The fact that employers are “nickel-and-diming” (quite literally so!) over a half dollar rise is not only ludicrous but also puts this city’s reputation to shame.  So this is how Hong Kong has been able to secure the top spot in the Heritage Foundation’s Index of Economic Freedom for two decades!  The disconnect between Hong Kong’s minimum wage and its overall level of wealth concentration is both farcical and appalling. 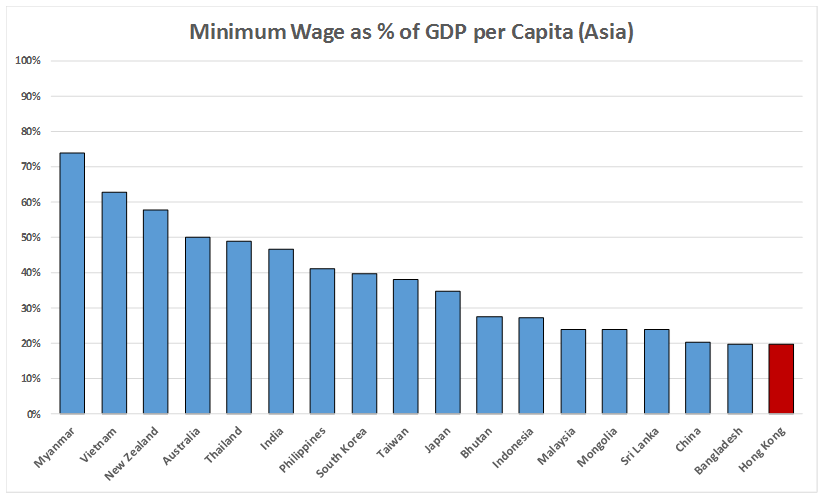 Critics will be quick to point out flaws. Many will allege that GDP per capita distorts such an analysis, and is an inappropriate measure for Hong Kong, where income inequality is among the highest in the developed world.  But isn’t that precisely the problem one is trying to highlight?  Admittedly, a much better measure would be something like median income per worker, but income statistics are typically reported per household and far more difficult to collect, so these data must be “massaged” heavily to make them comparable across geographies, normalized using additional estimates and assumptions on items like hours worked, household size, and so forth. Around 50 construction workers occupied a road in Fortress Hill in February in protest over unpaid wages. Photo: Facebook/Drive Safety HK.

The generosity of Hong Kong employers – or the complete joke that is the HKSAR’s labour laws, rather – is apparently on par with Bangladesh, home to some of the world’s most notorious sweat shops.  China, not exactly a champion of workers’ rights (Foxconn, anyone?), still scores better than Hong Kong.  Note that Singapore is conspicuously absent, for it does not have a minimum wage.  Even so, and despite its business-friendly reputation, Singapore still trumps Hong Kong in workers’ rights and benefits: 16 weeks of maternity leave compared to the HKSAR’s stingy 10, and a pension scheme that actually works, with meaningful employers’ contributions and guaranteed rates of return.

One may object to that calculation on the grounds that developing countries such as Myanmar, Vietnam, Bhutan, and Mongolia were thrown into the mix, possibly skewing the results with dubious data.  Let’s see how Hong Kong stacks up against a wider pool of affluent economies around the world in this second graph: 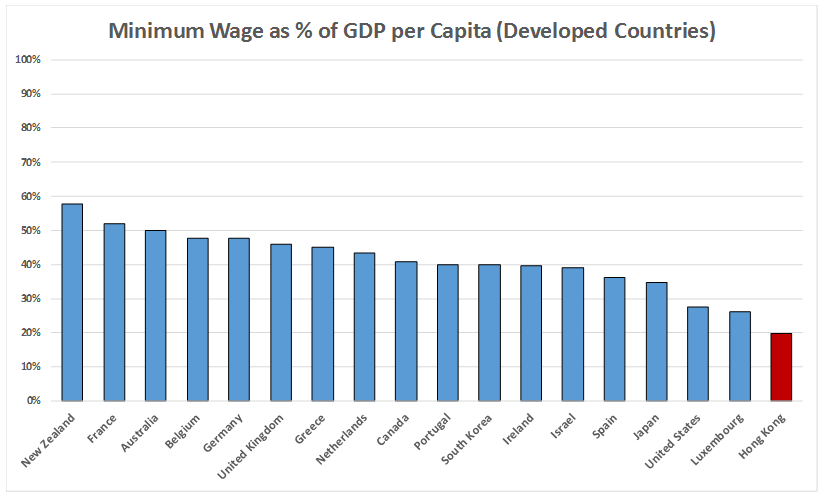 If Hong Kong were to keep pace with these countries, the minimum wage needs to be raised further to $67.8 per hour.  The average ratio across these developed markets is 41.9% and appears to be quite consistent.  (Note that all the Scandinavian economies are absent; they boast some of the most progressive labour laws but do not explicitly enforce a minimum wage.)

Instead of playing catch-up, can Hong Kong do better?  Talk of a minimum wage is outdated; a far more progressive concept debated these days is the “living wage”, broadly defined as the minimum income necessary for a worker to maintain a decent, respectable standard of living.  In addition to basic requirements like food, shelter, and clothing, the living wage also takes into account costs from healthcare, basic leisure/recreation, continuing education, childcare, and so forth.  Very few places around the world have a legally-mandated living wage.  Compliance is almost always voluntary, but a growing number of socially-responsible businesses nonetheless pride themselves on paying a living wage, with numerous studies having shown that adoption leads to increased productivity, lower rates of worker turnover, and overall improved “employee engagement”, as the business-savvy types like to say. Needless to say, estimating the living wage is a far more subjective and complicated calculation than determining an appropriate minimum wage, with a sufficiently rigorous analysis being far beyond the scope of this short text.  As a very general rule of thumb, living wage activists often suggest using the local poverty line for a family of four as a proxy for the living wage for a single worker.  In Hong Kong, that figure is $16,400 per month.  Assuming a 40-hour work week, that would mean a living wage of $94.6 per hour.

Government-sponsored ads throughout the city tout Hong Kong as “Asia’s World City”.  If Hong Kong is to live up to that slogan, it needs to keep up with the rest of the world and adopt labour laws befitting the city’s wealth.  Doubling the minimum wage – not squabbling over 50 cents – would be a welcome and most laudable start.  Tougher labour laws do not necessarily hurt economic competitiveness.  3 of the top 5 countries on the Index of Economic Freedom have some of the highest minimum wage rates in the world, alongside stringent legislation truly designed to protect the working class.

A firm commitment from GovHK to materially raise the minimum wage, implemented on a fixed and non-negotiable timetable with a gradual phase-in period, will enable the economy to equilibrate to this “new normal”.  What’s more, the transition need not be marked by waves of lay-offs; landlords are shrewd capitalists and will gradually reduce rents, understanding that the days of lining their pockets with astronomical rents are over.  As for those who purchased commercial properties at hundreds of millions for shoebox-sized storefronts, blindly hoping that droves of Chinese tourists will continue to pump up rents, well, those were silly investments to begin with, so let them go bust.  Tough luck.