Animal rights groups in China handed in a petition of 11 million signatures last Friday calling for an end to the Yulin dog meat festival. At the festival, due to begin on June 21 in Guangxi province, thousands of dogs are expected to be killed for human consumption. Activists were seen holding signs that read “Shame on Yulin” in Chinese. Others raised banners that read “I’m not your dinner.”

The petition directed a letter to China’s President, Xi Jinping, calling him to end the festival. The letter said that in doing so, Xi would demonstrate “leadership in protecting the wellbeing of both people and animals, and demonstrate that China’s global reputation as a progressive nation will not be besmirched by such activities.”

“Yulin is a total embarrassment to China,” said Xu Yufeng, founder of Beijing Mothers Against Animal Cruelty. “We urge the Yulin authorities to stand on the right side of history and to end the ‘festival’ in the interests of public security, food safety, social morality and China’s reputation,” she added.

Opponents said many dogs at the festival were either stolen from people or picked up from the street, which raised concerns over the lack of hygiene regulations. Supporters of the festival claim that eating canines is no different from consuming any other animal. 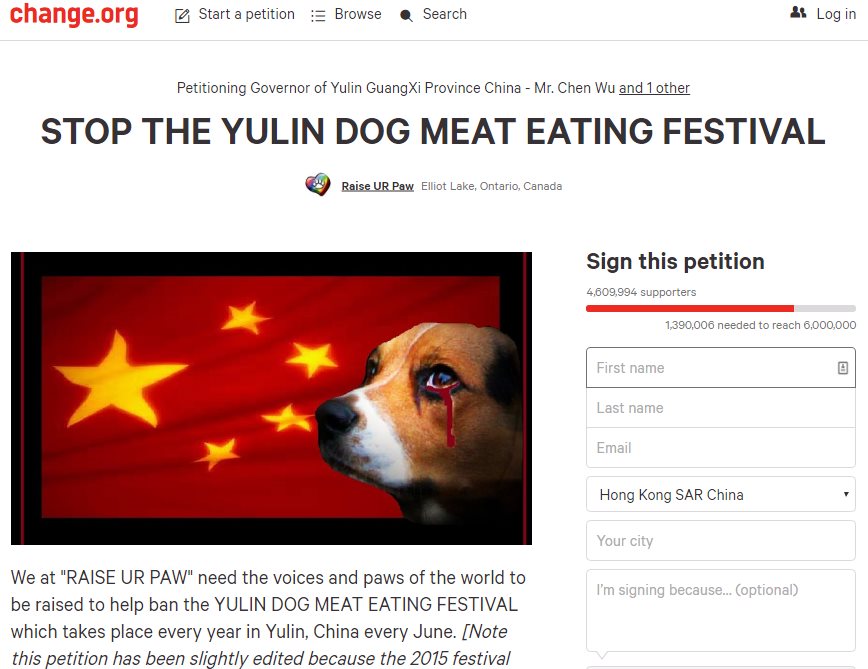 The festival also drew strong opposition from outside of Asia last Tuesday, when a group of protesters protested at the Chinese embassy in London. Carrie Fisher, famed actress from the Star Wars series, was among the campaigners.

“The festival is barbaric. What they do to those poor dogs is horrendous,” said Fisher.

The protesters presented the same petition, which had over 11 million signatures, to Chinese officials at the embassy. They refused to accept the petition, said Humane Society International.

In 2014, the Yulin government refrained from interfering in the festival despite strong public opposition, saying that the event was hosted by private businesses without official backing.

According to state media Xinhua News Agency, the custom of eating dog meat dates back 400 to 500 years in China as a means to alleviate summer heat. However, the Yulin dog meat festival only began in 2009.