Alvin Yeung Ngok-kiu, candidate for the pro-democracy Civic Party, swept to victory in Sunday’s New Territories East by-election with 37.19 per cent of the votes. Yeung won 160,880 votes out of 434,000, beating Holden Chow Ho-ding, of the pro-Beijing DAB party, to a seat in the Legislative Council. Voter turnout was 46.1 per cent. Yeung said on Facebook: “I think I’m really lucky. Standing for election at the turning point of a new era, I met an outstanding opponent in Leung tin-kei in the non pro-establishment camp, and I received trans-party support from pan-democrats.”

He said that he believed the result showed that Hongkongers wanted the pan-democrats, the Civic Party and the legislature to reform.

Yeung, a practicing barrister, is the successor to Ronny Tong Ka-wah, a founding member of the party who stepped down in June 2015, effectively triggering the by-election. Yeung has already received support from most pan-democratic legislators, and was widely seen as the camp’s favoured candidate in the by-election.

In his concession speech, Chow congratulated Yeung and thanked voters: “I continue to strongly believe that our ideology – to walk on the right track, and to preserve peace and rule of law in Hong Kong – will resonate among the Hong Kong people.”

Edward Leung Tin-kei, a candidate of localist group Hong Kong Indigenous came in third with 66,524 votes. Leung played a key role in the Mong Kok protest that broke out over the government’s clearing of street hawkers earlier this month and received support from localist group Civic Passion, Youngspiration and lawmaker Raymond Wong Yuk-man. 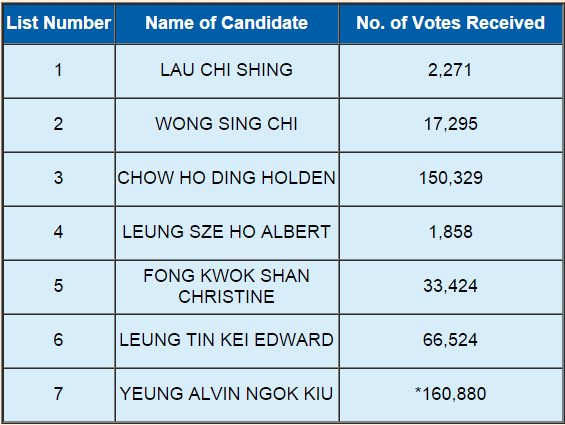 Although Yeung will only hold the seat until the Legislative Council election in September, his win means that the pro-democracy camp will continue to hold a one-seat majority in the geographical constituencies. The pro-establishment camp would therefore be unable to change rules in the Legislative Council to prevent filibustering. An amendment requires approval from a majority in both constituencies.

There are 940,366 registered voters in the New Territories East geographical constituency. A total of about 434,000 registered electors cast their votes the between 7.30am and 10.30pm on Sunday, representing a provisional cumulative turnout rate of about 46.1 percent.