This story centres on Jim Middleton who is chairman of the NGO, Clear the Air. He has a small business and banks with HSBC. He has had a personal account with the bank since 1968 and a commercial banking account since 1983, which you would think was ample time for HSBC to get to know its customer. Apparently not.

Middleton uses HSBC’s Business Internet Banking (BIB) to make payments. The system worked perfectly for many years until December 2014 after he decided to pay one of his workers on a regular basis via BIB.

It so happened the worker was from Pakistan who we shall Naseer. He is married to a Chinese woman with a Canadian passport who is a permanent Hong Kong resident as is Naseer. The couple have a child and live in a government housing estate. Naseer has an account with the Bank of China.

The first BIB payment in November 2014 went ahead on schedule. But there was a problem with the next payment which should have been paid on December 30th. Middleton checked his BIB record on January 2, 2015 after Naseer complained and he noticed an email from the bank dated January 2, 2015 -three days after the payment was due – saying that the payment had not been executed and asking for details of the beneficiary’s identity and the reason for the HK$12,500 payment.

Middleton supplied this information on the same day but it took HSBC more than a week to make the payment. Middleton also sent a letter to the general manager for commercial banking complaining about what he considered to be poor service on the part of the bank. The manager didn’t reply. He tried phoning the bank to find out what the problem was. But when he got through to customer service he was told it was a matter for the payments department. They wouldn’t let him speak to anyone in the department but said his concerns would be forwarded to the payments department. Middleton heard nothing further. 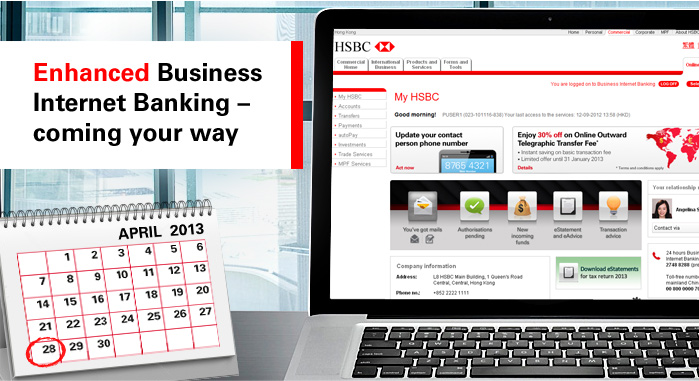 For the next few months the payment arrangements ran smoothly. But in June the payment was not made. The bank sent him an email saying that the payment hadn’t been made because it needed the details of the beneficiary – the same information he had given HSBC six months earlier. Once again Middleton’s letters and phone calls produced no explanation. The bank’s behaviour is even more strange on this occasion because after the first non-payment Middleton upgraded Naseer’s status to a designated payee, which is supposed to streamline the process.

Payments were resumed until a few months later the same thing happened again but this time with a curious twist.  Middleton’s instructions to HSBC via its BIB system as usual showed the beneficiary’s name, his bank and account number, and importantly, a reference number for the transaction. When HSBC informed Middleton it was unable to make the payment it quoted the same reference number but had somehow changed the name of the beneficiary.

A banker familiar with payments systems consulted by HowardWinnReports said this was strange. “If the reference number is the same then the rest of the information should match,” he said. How had this mystery beneficiary entered the system? HSBC did not respond to Middleton’s enquiries. At this point Middleton gave up and resumed paying Naseer by cheque. Middleton accuses the bank of “blatant racism.” HSBC denies this. In a statement to HowardWinnReports, it said, “Discrimination against customers on grounds of race or religion is immoral, unacceptable and illegal. We have comprehensive rules and policies in place to ensure race or religion are never factors in banking decisions.” The statement goes on to say   “I’m sure you are aware, though, that HSBC is subject to laws and regulations in various jurisdictions that require us to conduct enquiry, screening and confirmation procedures due to various public policy reasons.”

This last sentence appears to be an attempt to justify the heightened scrutiny Naseer had attracted from HSBC in terms of laws and regulations in other jurisdictions. It seems hard to imagine what “laws and regulations” could justify the pursuit of a HK$13,000 payment made within a single jurisdiction – Hong Kong – by a long standing customer of the bank. The scrutiny might be more understandable if the money was being sent in US dollars to Russia, North Korea or to a country where Islamic State has a significant presence.

A former banker with a big international bank said HSBC’s behaviour was “very odd.”  He says it is possible that Naseer’s name is similar to that of a wanted terrorist which is why his name might attract the bank’s attention. But he says the bank should have been able to determine after one check whether the payment could be made. The banker’s view was that the repeated failure by HSBC to follow Middleton’s instructions was a symptom of HSBC’s “broken back office.” The banker said that many of the new regulations and compliance guidelines which banks are having to adopt do not fit into their systems so they having to find workarounds. A number of banks are having to manually take take data from one system and feed it into another system and then perhaps to another system with the result that they are not able to coordinate their operations efficiently. It’s a problem for all large banks, not just HSBC.

There is an additional wrinkle to this story in that Naseer has ‘history’ with HSBC in that ten years ago he borrowed HK$40,000 to lend to a relative who was getting married. Naseer was never repaid and so he says, he was unable to repay HSBC. Debts cannot be pursued after six years. In any case the banker said the outstanding loan was a credit issue and would not be picked up by the payments system since the two systems — credit and payment – don’t speak to each other. HSBC has since written to Middleton apologising for the inconvenience he has endured and claimed that, “the additional information and checking required have caused a delay.” Middleton remains unimpressed.

It appears to be another sorry tale of poor service by a once admired Hong Kong institution.

Compliance... or discrimination? Another strange tale from HSBC