It’s noon. The blades of the fan swirl sluggishly, stirring the warm, dry air in the living room of a dated apartment.

During the short window of a noon break, Lai Shui-kee sneaks back to catch some horse races as they are broadcast live on TV. His bet was on “Elegant Frames”, but it’s only in fifth place.  Though it is a Sunday, two hours around noon is the only time Lai can take a break in the comfort of his own home.

With his brother he owns a fish stall in the Shek Kip Mei Market, five minutes away on foot. Apart from this short lunch break, he works from 7.30 in the morning till seven in the evening, a routine he has kept 360 days a year ever since he followed in his father’s footsteps when he came to Hong Kong in 1979, starting as his helper at the stall which he would later inherit.

Business has gone downhill in recent years, which makes it necessary for him to rush after dinner to a nearby dai pai dong for a part-time job butchering fish.

“It comes down to a few hundred catties of fish I butcher a day. I do the guts as well, even for small fish that sells at 10 bucks. So one thousand fish go under my knife a day!” says Lai, as he switches off the television.

“Elegant Frame” has made a mighty comeback and ends up in first place.

A solid 10 hours a day on the stall makes a no-nonsense lad like Lai a friendly face to the some seventy vendors in the Shek Kip Mei market, a building with an area of 9,000 square metres, located between the 19th and 20th blocks of Shek Kip Mei Estate.

The market houses 10 seafood and fishery stalls, each with its own suppliers and clientele. Lai’s stall specialises in refrigerated fish caught from the sea, while the next stall offers live catches, crabs spewing foam lie in wait for someone preparing a homely dinner to buy.

Even in peak hours when shoppers come for groceries, there are moments of quiet when these vendors have a few minutes to spare for some small talk with Lai, or “Bucktooth” as he is affectionately known here, usually about horse-racing tips. “It’s when people talk and laugh away their time with each other. A great time to unwind.”

The aging premises, poor ventilation and wasteful layout are some of the problems afflicting Shek Kip Mei Market, which is now facing pending redevelopment in five years. Long-time businesses like Lai’s, which has been there for over 30 years, have priority for relocation into the redeveloped market, although, at 53, Lai would rather give up the fish stall which helped him raise the entire family, albeit with reluctance. 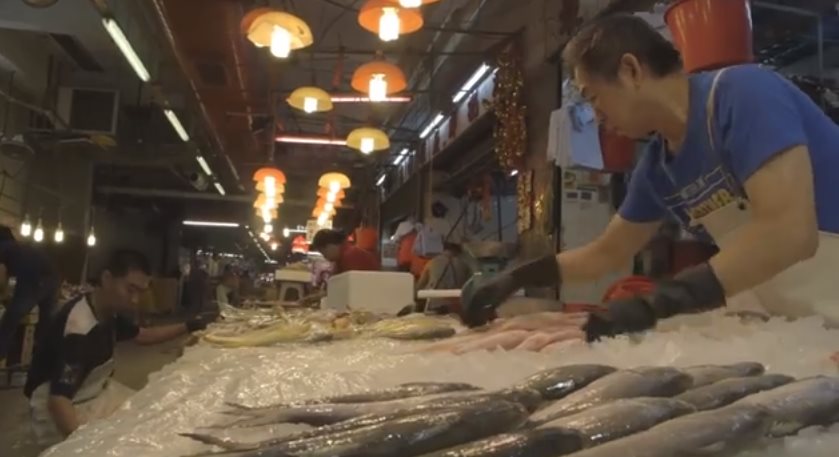 “Businesses like this fish stall aren’t going well these days. Sourcing and selling are getting difficult. People know deep-sea fish is better for your body, but their prices have spiked up. The natural environment has changed. The local fishermen bomb the fish out and leave nothing in the sea, so stocks are depleting. When I got in the trade, a catty of bream was 4.80; now it sells at 80 dollars and comes in for 70 dollars. Red Bigeye comes in for 99 dollars a catty as well. And they never give you the full weight. It used to be a full 15 catty for a carton of shrimps, not the scanty nine or 10 catty that you have to put up with now.” And Sham Shui Po is an aged community with weak spending power. As the market draws fewer and fewer people in, even though his is a stall with a high reputation, Lai’s business struggles to keep its head above water.

But even at his age, Lai has no plans for retirement as yet. Fully capable of more work, he is looking into a future as a minibus driver or security guard, instead of living on his children.

It’s typical of his generation, people who make very little complaint even in hard times, living life in diligence and temperance. In 1962, the year when Lai was born, his father came to Hong Kong as a refugee, leaving him and his mother in Zhuhai; he could never return to his hometown. He had never known what his father looked like until he was well into his teenage years, when his father came to Guangzhou for a trade fair, which made a reunion possible. After graduating from middle school, Lai applied to move to Macau, and finally settled in Hong Kong to make a living from his father’s fish stall.

The father and son’s decisions to leave mainland China for British Hong Kong were also typical of their generations.   Between the 1950s and 70s, waves of mass exodus brought as many as two million people across the border to Hong Kong.  Some were running away from political prosecution, others pursuing better lives.

In order to reach the land of freedom, or land of abundance, depending on their motives for fleeing the mainland, every single dark night saw many mainlanders leaving their homeland, walking to Shenzhen, diving into the deep and dirty Dapeng and Shenzhen bays, and swimming the deadly four kilometre journey to Hong Kong.

The years 1957, 1962, 1972 and 1979 marked the four major booms in illegal emigration to Hong Kong, as mainlanders suffered particularly severely, first because of a failed economic reform that caused the infamous Great Famine, then as a result of the Cultural Revolution.   There were also people who entered Hong Kong via the Portuguese enclave of Macau first.

“I knew this was the business I was getting into when I came to Hong Kong. I learned that with hard work comes great reward, as they say in Hong Kong.” The family business has given Lai, as well as his second eldest brother and sister, a family and a home, a reward hard-earned by over three decades of work from sunrise to sunset. He arranged to get his driver’s licence almost as soon as he set foot in Hong Kong. “To make myself more useful, to fight for a better living.”

His work kicks off at 7 in the morning when Lai’s brother buys fish from the wholesale market, which used to be across the harbour in Aberdeen but is now located in Cheung Sha Wan. Lai helps with the unloading in the stall, then heads to a teahouse for some dim sum before working till noon. A break at home, then back to the stall for more work. “You work to be the king of your trade. Work makes life meaningful. I’m on leave only a few days a year when a typhoon hits, but it’s boring. I don’t feel right until all my orders are done!” His exercise consists of taking goods to a local restaurant by running up the slope in Shek Kip Mei Park, carrying a carton of prawns, a laborious walk which bulks up his physique without having to hit the gym.

The clock ticks as the time of the noon break slips away. The shadows cast by the old signs outside the windows are stretched longer and longer, a reminder of the time when the brands of wool sweaters advertised on these signs were still popular. Yet again, Lai puts on his long plastic boots, as it is time to head back to the stall, where he will spend the rest of the day with his hands and knives soaked in the soggy scales and guts, leaving a smell that will linger till the dusk creeps in.

For the second story in this series, Lai Kwong-yip: An unsettled generation in a safe settlement, click here.

A fishmonger's tale: In the twilight of the Shek Kip Mei Market