Beijing slammed the US for sailing a warship near its artificial islands in the strategically crucial South China Sea Tuesday, saying the move was a “threat to China’s sovereignty”.

The USS Lassen “illegally entered” the waters near the islands, foreign ministry spokesman Lu Kang said in a statement, “without receiving permission from the Chinese government”. Under international law, a state’s territorial waters extend 12 nautical miles from its shore. However, the US and others argue that this rule cannot apply to artificial islands.

The move is a significant escalation of the dispute over the strategically vital South China Sea, which Beijing claims almost in its entirety, even waters close to the coasts of other states.

Several neighbouring countries including the Philippines, a US ally, have competing sovereignty claims and the dispute has raised fears of clashes in an area that includes shipping lanes crucial to world trade.

“We are conducting routine operations in the South China Sea in accordance with international law,” the official said. “We will fly, sail, and operate anywhere in the world that international law allows.”

Tensions have mounted since China transformed reefs in the area into small islands capable of supporting military facilities, a move the US says threatens freedom of navigation.

The work has been seen as an attempt by Beijing to assert its claims by establishing physical facts in the water.

“If true, we advise the American side to think twice before acting, to not act rashly, and to not make trouble out of nothing,” the official Xinhua news agency quoted Wang as saying at a seminar. 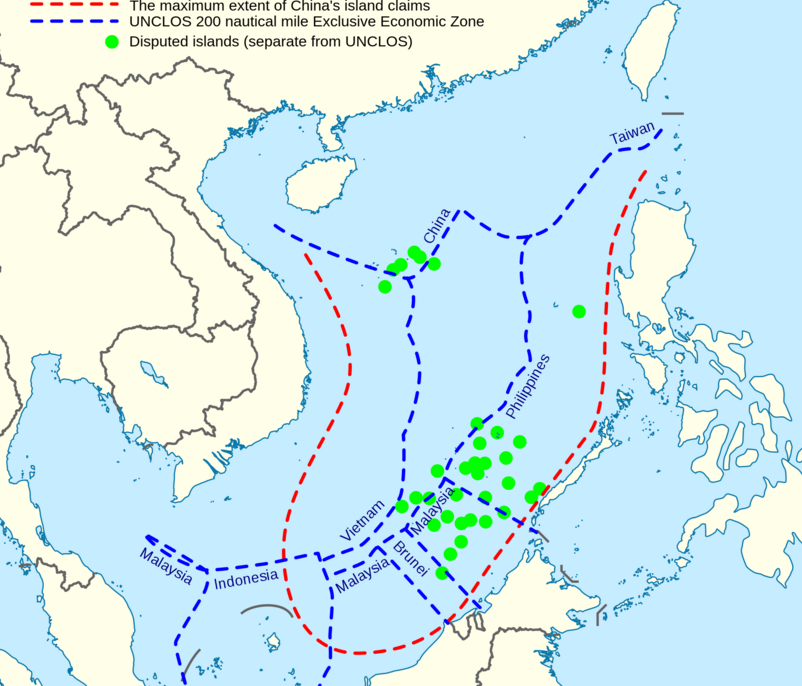 The US, which is engaged in a foreign policy “pivot” to Asia, and China, which has the world’s largest military and is expanding the reach of its navy, are jockeying for position in the Pacific.

In September, five Chinese naval vessels sailed near the US Aleutian islands in the Bering Sea.

Beijing has repeatedly said that its South China Sea construction work is primarily for civilian purposes, and Chinese President Xi Jinping during a visit to Washington last month pledged that the country will not militarize the area.

But satellite images of the islands published by the Washington-based Centre for Strategic and International Studies show that Beijing has reclaimed millions of square metres (feet) of land in the Spratlys, known as Nansha in Chinese.

The pictures also show a host of facilities with the potential for military applications being developed, including as many as three runways, at least one of them 3,000 metres (10,000 feet) long.

Brunei, Malaysia, the Philippines and Vietnam — members of the Association of Southeast Asian Nations (ASEAN) — also claim parts of the sea. Taiwan is a sixth claimant.

The US official insisted that Tuesday’s freedom of navigation operations were “not directed at any specific country.”

“US forces operate in the Asia-Pacific region on a daily basis, including in the South China Sea,” he added.

The exercise did not seem to have provoked a military response by Beijing, Andrew Erickson, an expert on Chinese maritime issues, told AFP, demonstrating that “China and the US share an interest in keeping the South China Sea’s vital sea lanes stable and open.”

Earlier this month an editorial in China’s Global Times newspaper, which is close to the ruling Communist party, condemned Washington’s “ceaseless provocations and coercion” in the South China Sea.

The People’s Liberation Army should use force if the United States “encroaches on China’s core interests”, it added.

The US recognises the right of nations to send warships into another country’s territorial waters as long as they do not conduct any military or intelligence related activities, a concept known as “innocent passage”.

China, however, disputes this interpretation of international law, saying that naval vessels may not sail into its waters without express permission from Beijing.