Yellow umbrellas, sit-ins and outdoor speeches are set to take place in Admiralty as local groups announced plans to commemorate the first anniversary of the pro-democracy Umbrella Movement.

In a joint press conference at the Legislative Council (LegCo) on Tuesday, political parties, student groups and other pro-democracy organisations said they will return to some of the most iconic sites from last year’s 79-day mass protests. 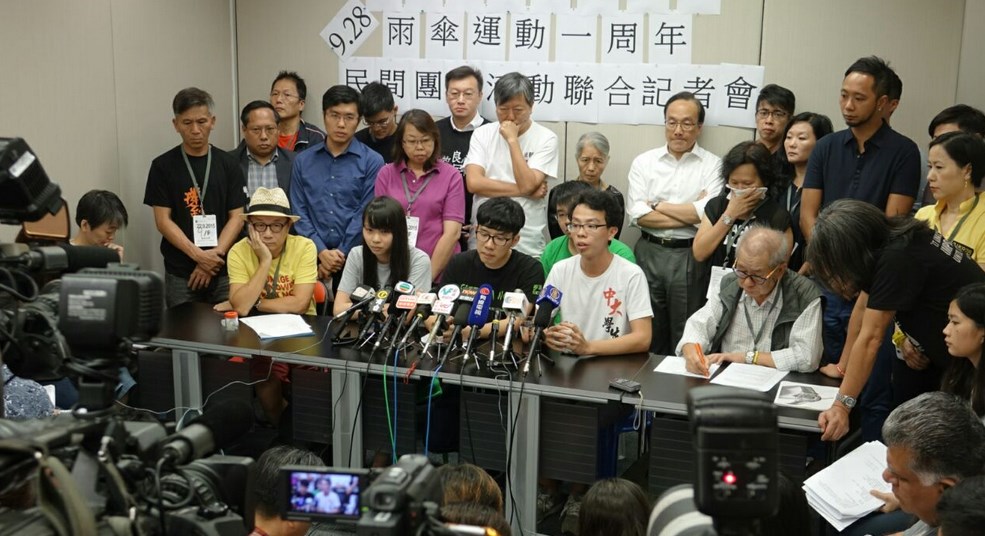 Civil Human Rights Front said it will hold a minute of silence next to the government complex at 5:58pm on September 28, the exact time when police fired the first rounds of tear gas at protesters one year ago.

Participants will hold up yellow umbrellas and stand in silence on a outdoor staircase next to the famous “Lennon Wall,” once covered with thousands of post-it notes from Umbrella Movement supporters. The “Lennon Wall” during the Umbrella Movement. Photo: Wikipedia Commons

“We would like to discuss the next direction of the democratic movement in Hong Kong,” Agnes Chow, a core member of student group Scholarism, told HKFP.

The talks will be jointly held by the Hong Kong Federation of Students and Scholarism, the two most prominent student organisations during the Umbrella Movement, on September 26 and 27, Chow said.

While groups present at the joint press conference stressed they will not initiate another illegal occupation, the radical People Power party has vowed to take over Gloucester Road in Causeway Bay, one of the three protest sites, on September 28.

In a video posted on Facebook, People Power’s Tam Tak-chi called on 1,000 supporters to join the occupation and stand on the road for 87 minutes to remember the 87 rounds of tear gas fired on protesters on September 28.