Malaysia’s new Communications and Multimedia Minister has proposed amending the country’s Internet laws to force news websites to register with the government. Human rights groups have been quick to denounce the proposal as a threat to free speech. Some of the participants during the #AtTheEdge campaign calling for a free and independent media in Malaysia. Photo: Malaysians Stand in Solidarity with The Edge, via Facebook.

Minister Datuk Seri Dr Salleh Said Keruak also wants to allow the Malaysian Communications and Multimedia Commission (MCMC) to block sites deemed to be “threats to national security and stability.” He has assured the public, however, that the government will study the models in place in other countries, before amending Malaysia’s law, which he expects to do in October. The Minister wrote on his blog:

“We will try to make sure that Malaysia will follow the international standards. However, even in the ‘free’ and ‘liberal’ west there are limitations as to what you can say and publish. And this is what Malaysians need to understand.”

On August 17, 2015, he wrote on his blog about the government’s meeting with Facebook, Google, and Twitter, where representatives discussed how to address more effectively the publication of false information on social media. He urged netizens to be more responsible. He also reminded critics that media freedom is not absolute:

“The online environment is not a lawless space and action can be taken against anyone found to have breached the law, including in the online space. Bear in mind that publishing or posting sensitive or unverified information might potentially spark an untoward situation likely to jeopardize public safety.”

The Minister is perhaps referring to the recent suspension of a newspaper (The Edge) and the blocking of a news website (Sarawak Report) by the government for allegedly posting unverified information. Officials accused these news outlets of publishing inaccurate documents about a corruption scandal that linked the Prime Minister to 1MDB, a state-managed investment firm that reportedly lost billions of taxpayers’ money.

The government, however, has come under intense criticism for harassing the press and attempting to silence criticism over the 1MDB issue.

The proposal to require news websites to register is seen by some as part of the government’s response to the rising outrage over the corruption issue. 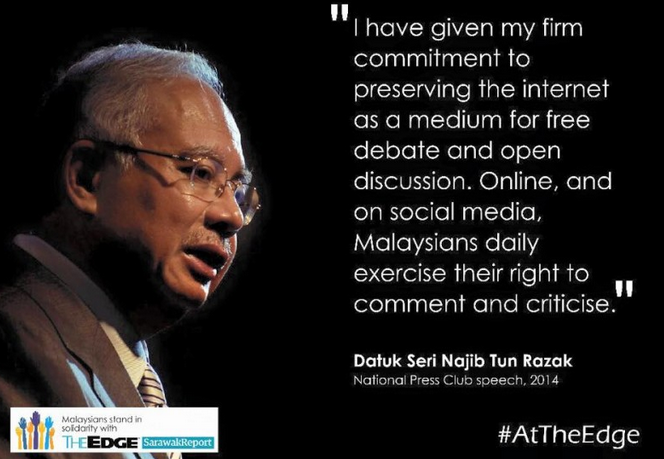 Photo: Malaysians Stand in Solidarity with The Edge, via Facebook.

Writing for Malay Mail Online, Khairie Hisyam pointed out that there are already laws that can address the Minister’s concerns about defamation and false reporting:

“We have adequate laws in place to deal with malicious reporting and any other misdeeds imaginable when it comes to online news portals. So why does the specific point of registering online news portal arise? It makes no sense.”

He warned that online registration can restrict free speech by extending the burdens newspapers face (like applying for government licenses) to less equipped groups.

“The power of the ministry to revoke this license at any given time is an albatross around a licensed publisher’s neck. They are constantly aware that this power, without warning, may become a political tool to silence dissent or unfavorable reporting. Should online news portals be also subjected to this restraint, it would effectively spread self-censorship from print to online media and stifle news reporting.”

Activist Anil Netto argues that the registration of news websites is unnecessary:

“Online news portals already have registered companies or societies managing their portals and their journalists already have had to register for official press accreditation cards. Moreover, the authorities already have a slew of draconian laws which they can use – and have used – against journalists.”

In an interview, the Minister clarified that his proposal is related to the need to tackle issues such as pornography, online gambling, and ISIS threats. But advocacy groups like the Association for Progressive Communications and the Persatuan Kesedaran Komuniti Selangor have asserted that the proposed amendment to the law was made at a time when authorities were trying to limit media reporting:

“…they must be viewed within the current political environment in Malaysia, where freedom of expression and peaceful assembly and association is under attack. It is highly unlikely that this move is intended for anything other than shutting down criticism and bringing into line what is left of the free press.”

Last August 8, hundreds of journalists gathered in the capital to show solidarity with the beleaguered media groups. A bigger rally is being organized for August 29 by various groups to demand accountability from the government.