Malaysian media groups and activists are preparing for a major rally on August 8 after the government ordered the suspension of two newspapers and the blocking of a news website which has been reporting about a corruption scandal involving Prime Minister Najib Razak.

The Coalition for Press Freedom was initiated by five media groups which adopted the campaign hashtag #AtTheEdge to highlight the rise of media censorship in the country. 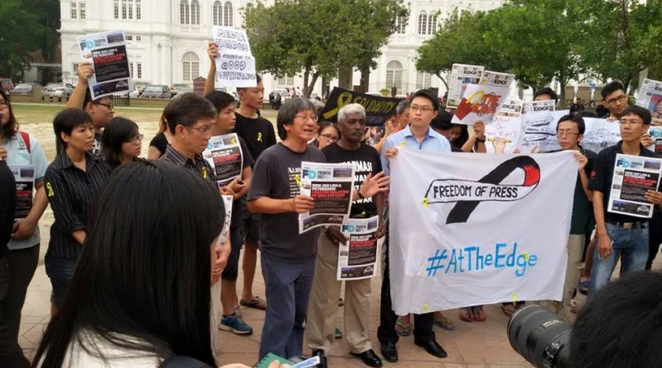 Journalists , activists, and concerned citizens gather in Penang, Malaysia to show solidarity to the campaign for the protection of free speech. Photo: ‘Malaysians stand in solidarity with The Edge’, via Facebook.

On July 19, the Sarawak Report news website was blocked and on July 27, two local papers belonging to The Edge media group were suspended. These media companies have been exposing the anomalous dealings of 1Malaysia Development Bhd (1MDB), a state-managed investment company which reportedly incurred a debt of more than a billion US dollars. They have corroborated the expose of the Wall Street Journal which alleged Prime Minister Najib got 700 million US dollars in bank transfers through the 1MDB.

The campaign demands of #AtTheEdge are all directed towards the government:

On July 31, more than 70 journalists and activists gathered in front of the office of The Edge to show their solidarity with the beleaguered publication:

Stand in solidarity with The Edge at The Edge's office, 31 July, 3pm. Jom! #AtTheEdge pic.twitter.com/IZvbu1JHKK

The campaign is quickly getting support from many sectors. The Facebook page‘Malaysians stand in solidarity with The Edge’ already has 9,000 likes. Meanwhile, an online petition in support of #AtTheEdge campaign has received 30,000 signatures. The petition denounces the suspension order, which will last for three months, as a government ploy to hide the truth:

At a time when there are more questions than answers available regarding the humongous financial scandal, the Ministry’s action appears to be a self-serving draconian attempt at shutting up inquisitive Malaysians. 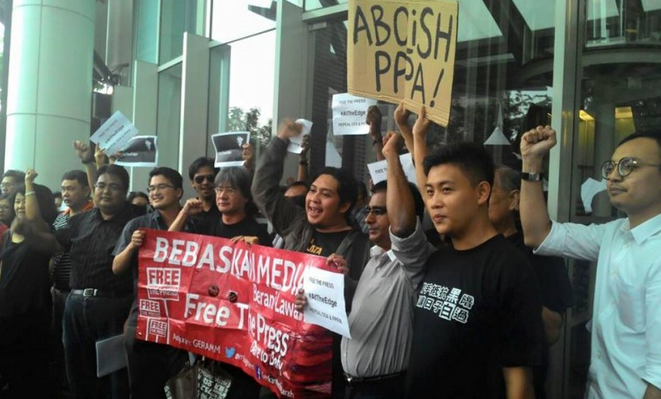 Solidarity action in front of The Edge office. PPPA refers to Printing Presses and Publications Act which was invoked by authorities when they suspended The Edge. Photo: ‘Malaysians stand in solidarity with The Edge’, via Facebook.

Transparency International’s Malaysia office described the suspension order against The Edge as a counterproductive and irrational measure:

Suspending a newspaper which reported on the 1MDB scandal is not going to help the government in any way. In fact it will have more negative impact on Malaysia in terms of its international standing, sovereign ratings and the other ratings including the international perception on our press freedom.

Our government must not go for the ‘overkill’ in suppressing free speech on the pretext of acting against critics. Let’s get our facts right before we carry out more irrational measures.

Francis Loh, president of the advocacy group Aliran, underscores the importance of afree press in society:

…a democracy must have vibrant mass media and independent press which dare to conduct investigative journalism like what The Edge and Sarawak Report have done. They must make available information to the rakyat [people], especially when the authorities tell the rakyat to wait and wait.