Next Media announced on Monday that one of its magazines, Sudden Weekly, will cease publication on August 7 after 20 years.

The CEO of the magazine said the decision was made after the publication became unprofitable this year. Both print and online versions of the magazine will be terminated, with all 70 editorial staff set to be laid off in August.

Last Saturday, Ming Pao reported that Next Magazine, another publication owned by Next Media, had incurred losses amounting to tens of millions of dollars in the past four months. It quoted a source stating that Jimmy Lai Chi-ying, founder of the media corporation, wanted to cut the print edition of Next Magazine.

However, the latest announcement by the company signaled that Next Magazine will be combined with Eat & Travel Weekly, and Me! magazine starting from August 16.

Both Eat & Travel Weekly and Me! magazine were originally part of Sudden Weekly. In a statement, the Next Media Trade Union said it was “very distressed” by the company’s decision to fire the 70 staff responsible for the publication. It added that Sudden Weekly and Next Magazine have laid off more than 100 staff members since last Friday.

The union called on the company to explain its future direction to all staff members, and consider rehiring the laid off staff in the future. On Monday, the Hong Kong Journalists Association described the existing business environment as a “harsh winter” for print media in Hong Kong. The association added that it was “saddened” by the latest news, adding that it would closely monitor the situation and assist the affected staff as necessary. 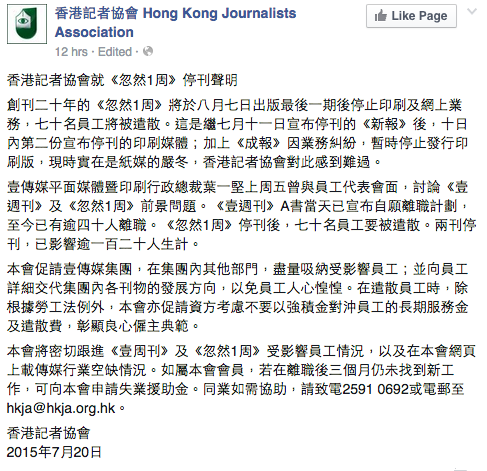 Sudden Weekly was founded by Next Media in 1995. The magazine focused on entertainment news, targeting female readers.

A harsh winter.
Rumours surfaced last Friday that Next Media would stop publishing some of its magazines, saying that it was “highly pessimistic” about the future of print media. It then announced plans to lay off half of the staff responsible for Next Magazine’s Book A section.

Another newspaper, Sing Pao, is still currently under the threat of liquidation. Though the print presses have ceased, content is still being published online. 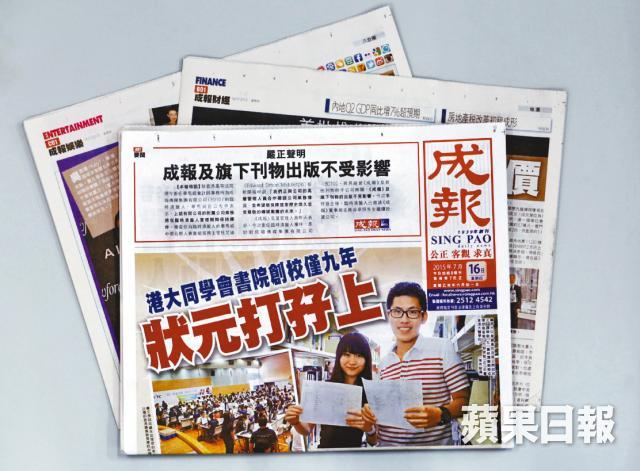 Shirley Yam, vice-chairperson of the Hong Kong Journalists Association, told HKFP last Thursday that “it’s only a matter of time that some papers will have to close down.” She said newspaper closures were “the result of the economic pressure and the financial pressure that the Hong Kong media have been facing for some time.”

A 'harsh winter' for print media? Layoffs as Sudden Weekly to cease publication in August