“Everyone has the right to be free from surveillance,” Jason Chao Teng-hei, spokesperson for the pro-democracy political party New Macau Association, told HKFP. “The leaked documents confirmed Macau activists’ long-held suspicion that the authorities have disregarded the rule of law to spy on its political opposition.”

Article 172 of the Code of Criminal Procedures in Macau’s law stipulates that government surveillance must be authorised by a court and used only on individuals whose suspected crime is punishable by a maximum prison sentence of more than three years.

Leaked documents show that Macau’s police and anti-graft agency might have met with representatives from Hacking Team, an Italian company that is known to supply intrusive hacking tools to security services in Libya, Morocco, Sudan, Saudi Arabia, Egypt and Ethiopia.

The hacking tool, also known as “Remote Control System” (RCS), enables users to hijack a target’s computer or mobile device, recording the device’s every use, movement, and even visual and audio data related to its surroundings.

According to a 2013 report by Reporters Without Borders, “digital mercenaries” like Hacking Team “sell products that are liable to be used by governments to violate human rights and freedom of information.”

One of the leaked email threads reveals that the judiciary police, a department specialising in criminal investigations, had arranged for a private demonstration of Hacking Team’s spyware tool at the Cotai police station in October 2012.

One of the leaked emails between Macau police and Hacking Team.

Although the emails exchanged do not indicate the police actually met Hacking Team or acquired the software, it is evident that Macau authorities are interested in purchasing the spyware.

In another email, a police officer called Derek Chan Weng-Hong asked for proposal and price details of the RCS. Chan also offered to make hotel reservations.

In May 2012, Chan asked Hacking Team to set up “a complete system” including hardware and software in his department. He also asked the spyware company for discounts, training and details on “how to prevent the monitored device user [from tracing] where the information [is] delivered to”, emphasising that the police need “a 100% untraceable solution”. 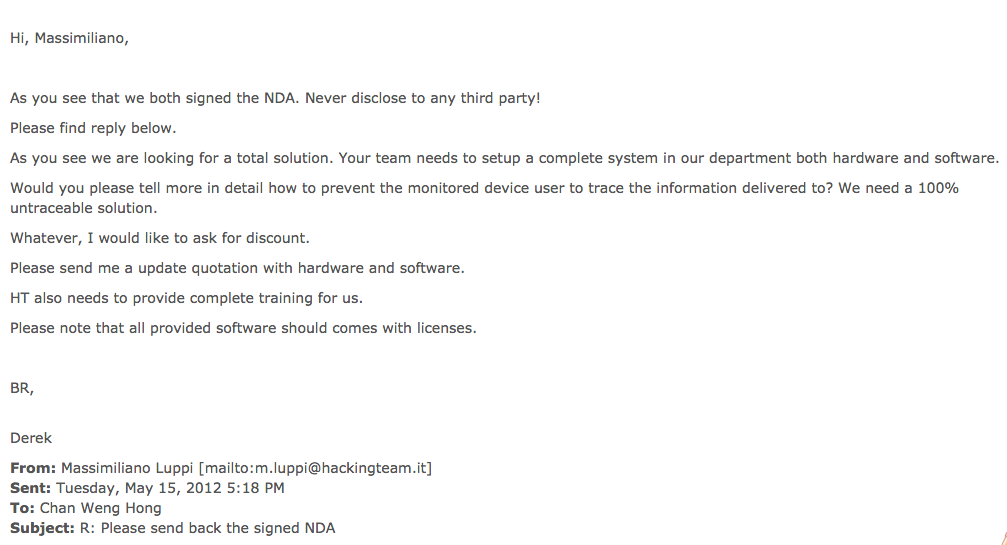 One of the leaked emails between Macau police and Hacking Team.

Another email thread indicates that the Commission Against Corruption, whose head is appointed by Macau’s chief executive, also asked for a spyware demonstration in a Galaxy Macau hotel room a year later, in October 2013.

The leaked emails were among nearly a million Hacking Team emails published by Wikileaks last week.

Both judiciary police and the commission did not respond directly on whether they had met with Hacking Team or purchased its spyware, according to Macau newspapers. The two agencies said that it is important to be kept updated on technological developments in order to strengthen their investigative ability.

“I wasn’t surprised by the leaked information,” Sulu Sou Ka-hou of New Macau Association told HKFP. “It is actually an open secret in Macau’s activist circle that authorities wiretap and intercept our conversations illegally. We just didn’t have any evidence, now we do.”

“The fact that Macau authorities did not deny the accusations that they have bought or used the spyware indicates that they’re blatantly disregarding the law that prevents authorities from intercepting private data without court permission,” Sou said. 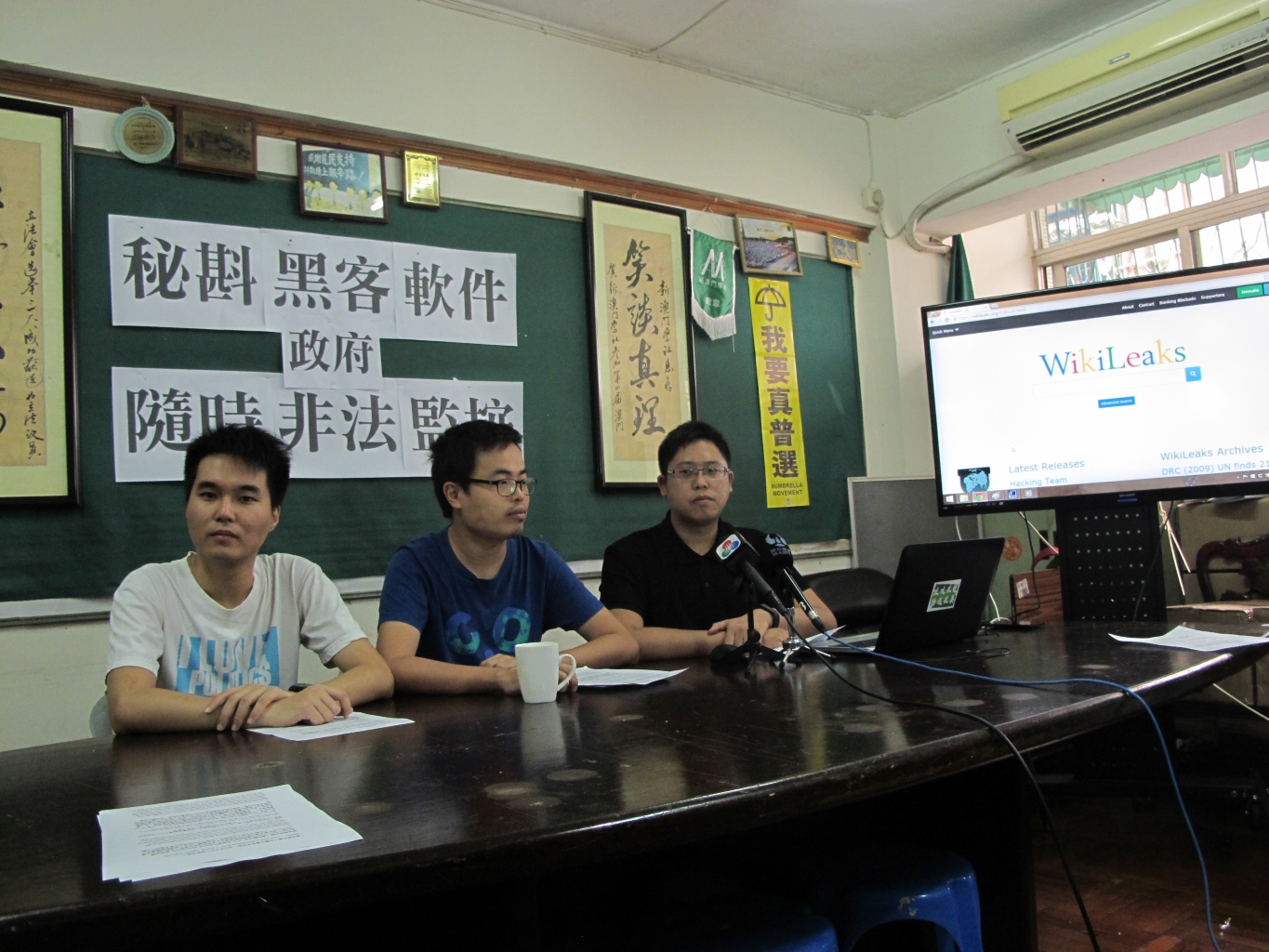 Sou and Jason Chao said that they and fellow activists had noticed symptoms of wire-tapping, such as hearing echoes, having phone calls cut off during a conversation, and not being able to make phone calls.

“But as the government switched to high-tech tools, it is impossible to know if we are being monitored,” said Sou.

He added, “Macau is very small, so it is very easy for police to identify and target activists and journalists.”

Chao said that even though materials collected through unauthorised surveillance operations cannot be presented as court evidence, they can still be used to smear or intimidate activists.

Macau activists and journalists have been voicing concern over suspected state surveillance. Wong Tung, a well-known political commentator, has said that police had been tapping his mobile phone for over 13 years. Macau lawmaker Au Kam-san also believes he is a target of police’s mass surveillance operations.

Macau’s Commission Against Corruption said in a statement that it would not respond to enquiries about investigative details, which are classified information. It said that its investigations “fully comply with Macau’s laws”, and that it is “entitled to carry out enquiries and investigations deemed necessary to fulfil its goals”.