Hong Kong’s Football Association could be fined by FIFA if fans continue to boo at their own national anthem.

The warning from the international football association comes after fans of the Hong Kong national team booed the Chinese national anthem at the start of two World Cup qualifying matches a few months ago. A letter sent by FIFA’s disciplinary body to the HKFA on July 2 said booing the national anthem breached the organisation’s disciplinary code and warned that further sanctions could be imposed “in the case of serious disturbances”. 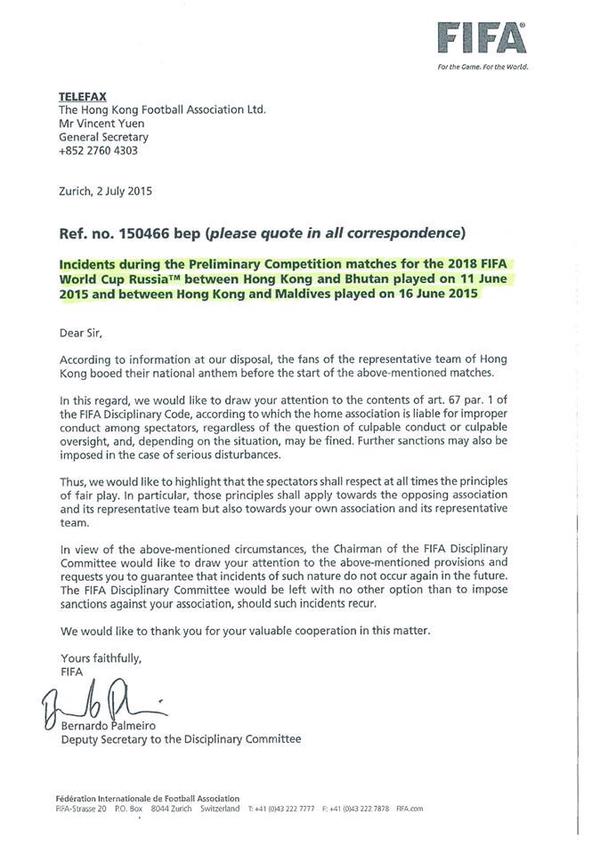 FIFA’s letter to the HKFA warning them that they could be fined for booing the national anthem. Photo: HKGolden.

FIFA’s disciplinary regulations say “improper conduct” includes displaying any “insulting or political slogans in any form” or “uttering insulting words or sounds”. Further sanctions can include being forced to play the match behind closed doors, a forfeit of the match, a points reduction and even disqualification from the World Cup.

The HKFA released a statement, saying: “The HKFA sincerely hopes that the spectators can respect the principles of fair play in the coming matches and put the benefit of Hong Kong Representative Team into highest consideration.”

The same happened again in the city’s match against the Maldives. In a video by online news website Passion Times a yellow umbrella can be clearly seen in the crowd of Hong Kong fans.

Netizens on the online forum HKGolden reacted angrily to FIFA’s response. One person asked: “Is there a problem with booing your own fake national anthem?”, whilst another person said they would just “boo louder”.

Hong Kong are currently at the top of group C in the World Cup qualification matches ahead of the 2018 World Cup in Russia. So far Hong Kong have won matches against Bhutan (7-0) and the Maldives (2-0).