An NGO dedicated to supporting refugees living in Hong Kong has condemned a racist joke repeated by the president of the Legislative Council.

The news comes after Hong Kong Free Press revealed that Jasper Tsang Yok-sing joked about clearing pro-democracy protesters from the street by encouraging Africans from Chungking Mansions to go down to the Occupy camp site with the bonus of free food. In a statement, the Refugee Union said they were “greatly concerned” by Tsang’s joke which was told last November at a private event during the height of the African ebola crisis.

“The Refugee Union is outraged by the racist comments which we find highly discriminatory and deeply offensive… It’s shameful that such a high-ranking senior member of the Hong Kong Government would make such degrading comments in light of what happened. We all know what Ebola is and the death and disaster caused to affected African countries. It is therefore most hypocritical and misleading for a public officer of Mr Tsang’s calibre to make such offensive remarks in the wake of a deadly tragedy,” the statement said.

In addition to condemning Tsang’s remarks, the NGO also called on the LegCo president to retract his comments and apologise. 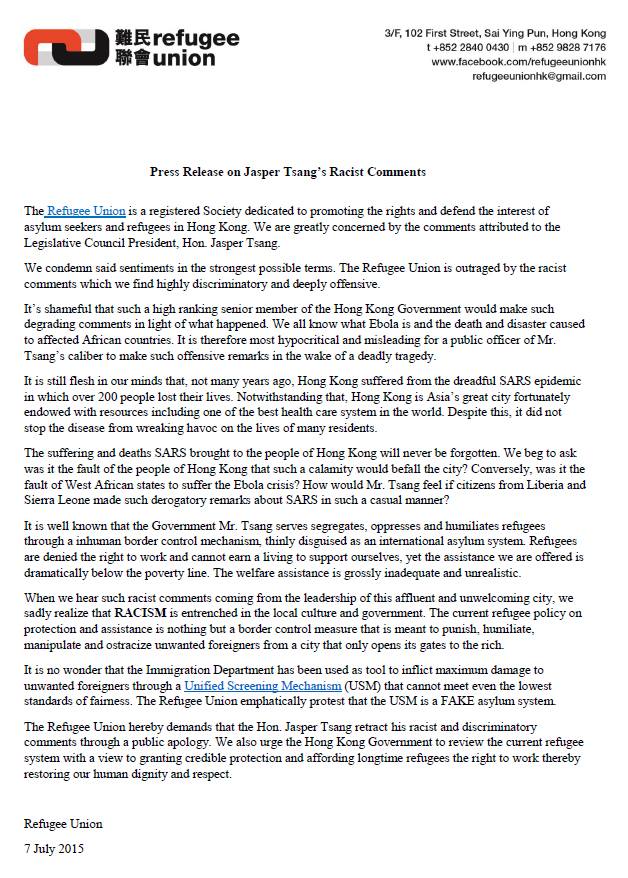 The statement goes on to criticise the Hong Kong government of being one that “segregates, oppresses and humiliates refugees” and urged the current administration to review their policy on processing applications from refugees seeking asylum in Hong Kong.

Tsang made the comments during a speech at the University of Hong Kong’s St John’s College.  In an email to HKFP, Tsang said “there was no racism intended in any remark I made on that occasion.”

Asylum seekers looking for refuge in Hong Kong need to go through a process called the Unified Screening Mechanism. The USM was introduced in March 2014, but has been criticised by NGOs and human rights advocates for being slow and doing very little to help refugees.