The church tower hitting twelve o’clock stops the Chinese tourists snapping selfies on sticks only for a second. Surrounded by old-looking Austrian farmhouses, underscored by an upbeat Strauss waltz in the background, they continue posing on the village square.

The square is the center of “Hallstatt”, a replica of an Austrian town with UNESCO world heritage status. Built by state-owned developer Minmetals in the suburbs of Huizhou, a prefecture-level city of 4.5 million in southern China, it is surrounded by a similarly themed housing complex of one million square meters.

Half a year ago, it was still a ghost town. Today, what was planned as residential area has become a tourist town and a mecca for wedding photographers. 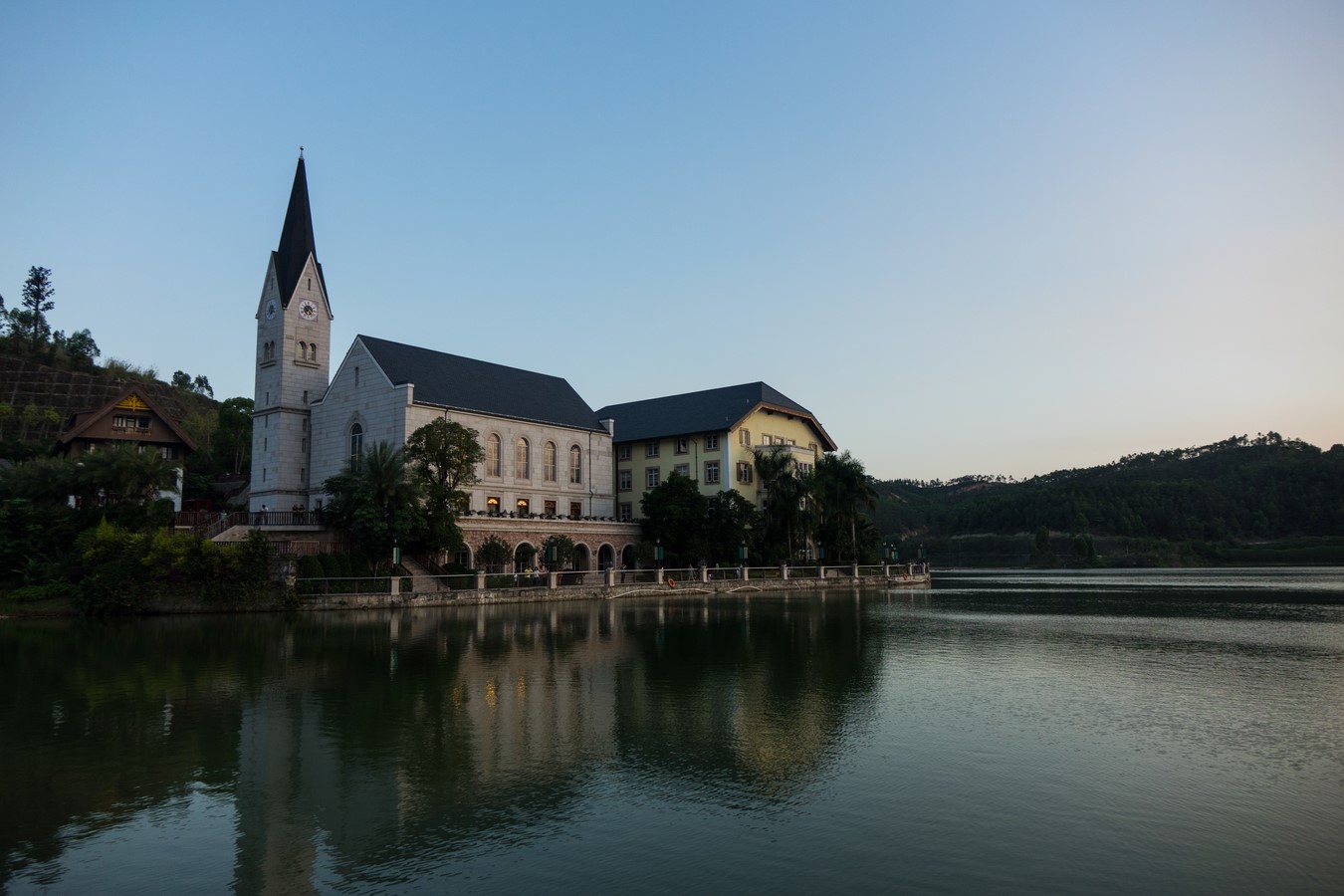 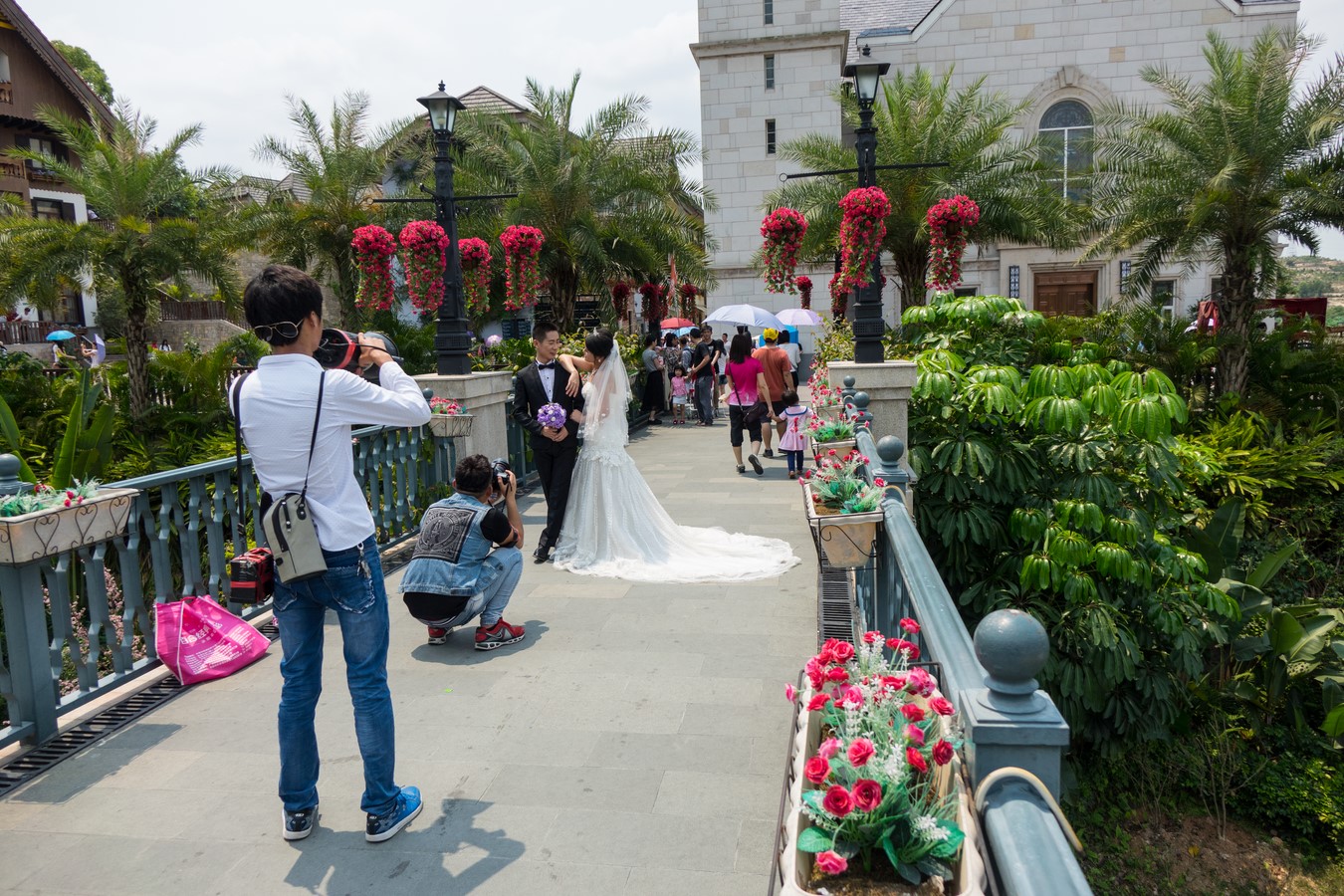 “I brought my kids here for sightseeing,” said Mr Zeng, who was resting with his family on the lawn. “I never thought about buying [a house] here, because Boluo is quite far away.” Boluo, the nearest town, lies three kilometres west as the crow flies.

A walk from Hallstatt towards Boluo along the a new, eight lane road is a ghostly affair. Empty residential towers line the sidewalk, some still under construction and enshrouded in green hulls. At night, whole towers stay dark. There are only a handful restaurants, nestled in between shops selling locks, ceramic tiles and plumbing. 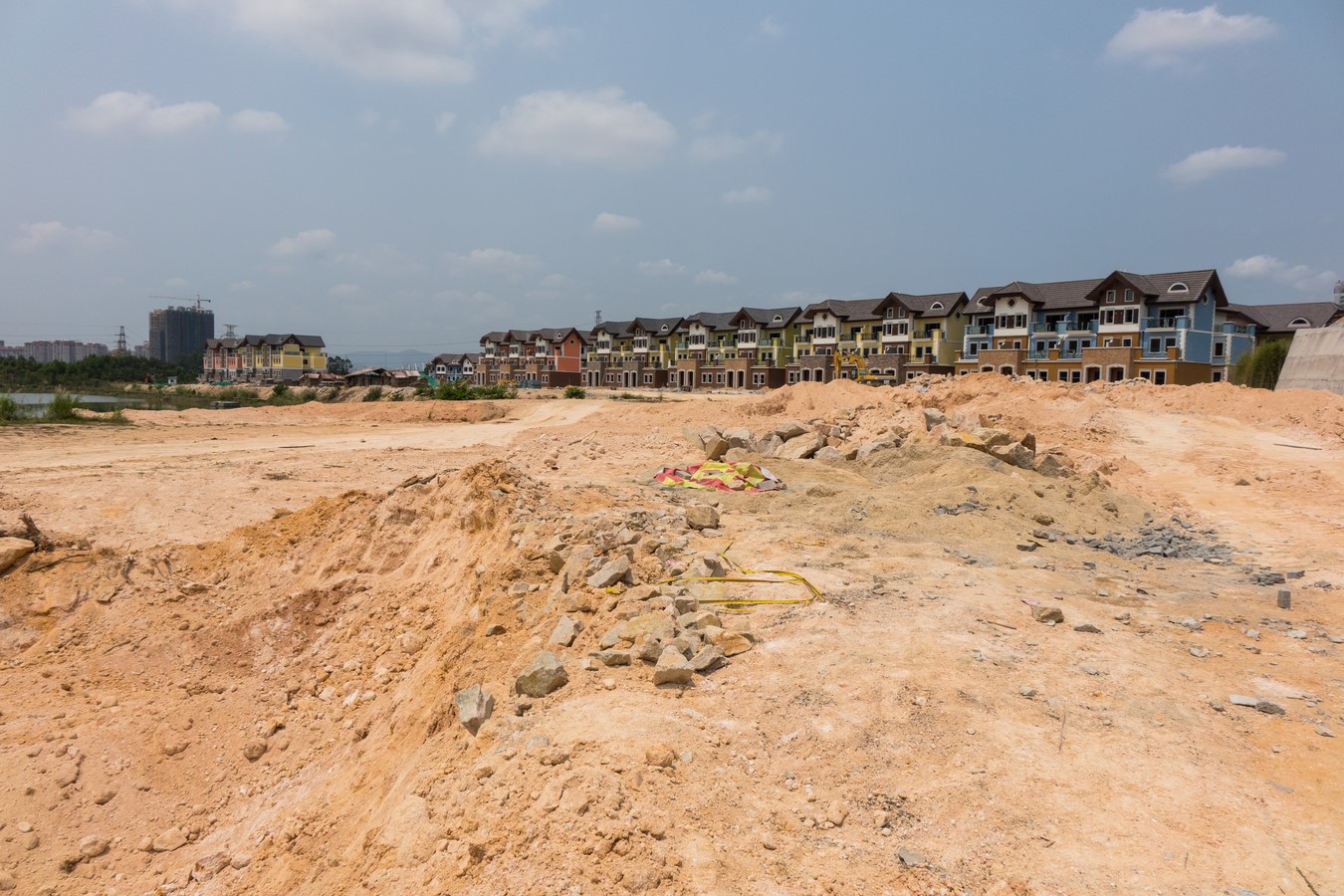 The area around Chinese Hallstatt is the result of a real estate boom gone wild. China’s GDP growth relies heavily on property development. Also, many people use real estate as a means to hedge against inflation and gain wealth. It has created vast urban developments nobody lives in. Hallstatt is one of them.

Along the deserted road, Ms Lu and her family of five sell tofu dessert. “This road used to be our village,” she said. As compensation, the farmers received small houses. Lu did not know how much Minmetals paid for the land. “The government represented us,” she said, “they took part of the money and when the rest got into our hands, it was not much.”

In Boluo, the building boom started in 2007, when a new highway opened, connecting the suburb to Huizhou. In the years after, skyscrapers mushroomed. But it did not last forever. “In 2014, the Huizhou property market suffered a huge decline,” said local journalist Jiang Qizheng. “2013 was a very good year so they overbuilt after that.” 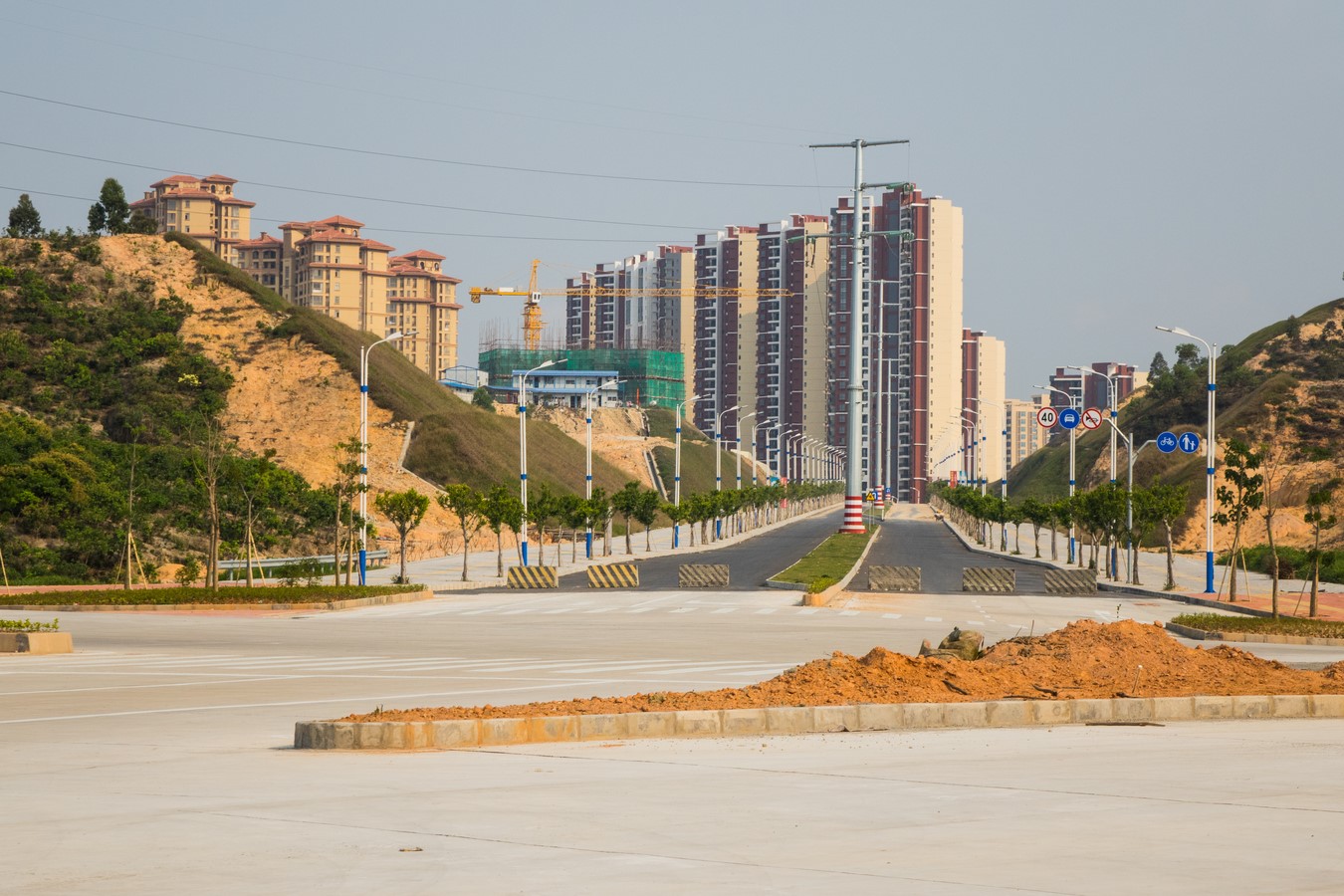 He said Huizhou is in a special position because it borders the economic powerhouses Shenzhen, Guangzhou and Dongguan. “It has been attracting buyers who cannot afford housing in these three cities,” he said. “Many people work in other cities but come to Huizhou only for weekends and holidays.”

The region is also famous for its clean air and is a place to escape the congested and bustling coastal cities nearby. High-quality housing is available for a mere 5,000 yuan [800$] per square meter. In nearby Shenzhen, the square meter costs around 30,000 yuan [5000$].

Here, residents face a severe shortage of affordable housing. Young couples work for years to buy a home of their own, while two hours away in Huizhou, thousands of modern apartments stay empty.

According to Dong Tao, Chief Regional Economist at Credit Suisse, real estate prices in China’s tier one cities are up to 40% higher than in Tokyo, while residents only earn half the salary of their counterparts in Japan.

However, in tier two to tier four cities, the absolute price levels are low, and the inventories very high. “For these areas, oversupply is a serious problem,” Tao said. “If demand and supply are way out of alignment, at some stage, a correction probably will take place.”

Southwards from Chinese Hallstatt, large apartment complexes hug the hilly countryside, styled and named after European models. There is a French one (“Evian”), a British one (“Royal Garden”) and a German one (“Deutsch Kultur”). Sales agents evade enquiries about occupancy rates.

A bicycle ride through the German styled housing complex is an eerie affair. Poly Real Estate built 2,542 houses here, but only a dozen show a sign of life. The sales office refused to say how many are sold. But in mid-2014, the company cut prices for all their houses in Huizhou by 8.5%. 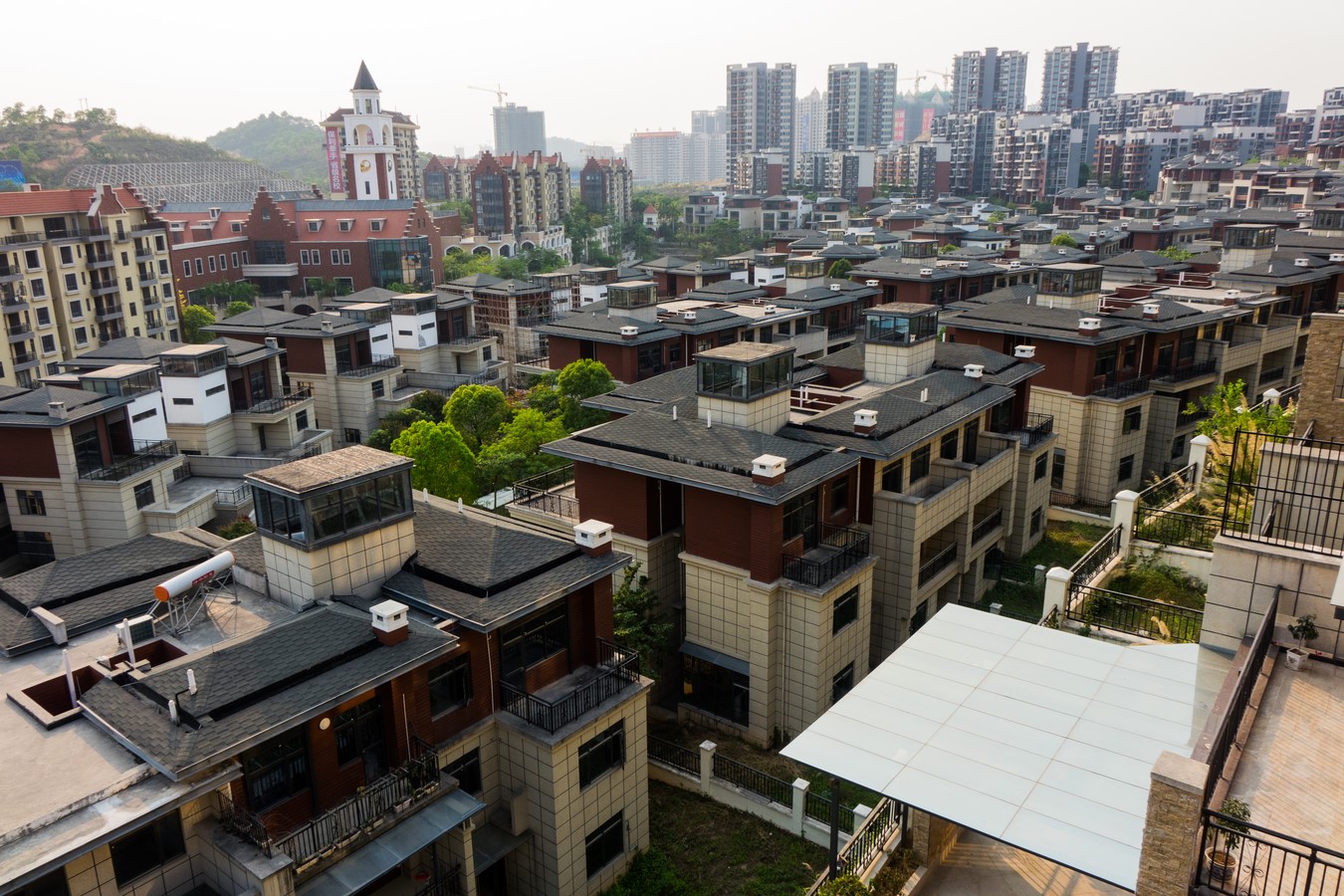 The “Royal Garden” advertises with a blue peafowl and a horse carriage, a stark contrast to the towering residential blocks painted in a dull brown. There is no resident in sight, albeit the 3,000 apartments on sale here. The sales office says 70 percent are still empty.

In a 2014 report on the local economy, the Boluo government acknowledged that “the real estate market situation is complicated and not too optimistic”. During the first two months of 2015, real estate sales dropped by 27.5%.

Anne Stevenson-Yang, research director of J Capital Research, painted a dire picture of the Chinese real estate sector this March, saying that overcapacity in housing was “obscene” and that recovery seemed unlikely.

Beijing is aware of the situation. Ghost towns, or in communist lingo, “sleeping towns”, were a hot topic at annual meetings in the last years.

Following Premier Li Keqiang’s work report in 2014, the government issued a policy paper urging local governments to stop “extensive development” and heal “city sickness”. In 2015, the “resurrection” of the former ghost town Zhengzhou, the capital of Henan province, presented as a role model for other areas. 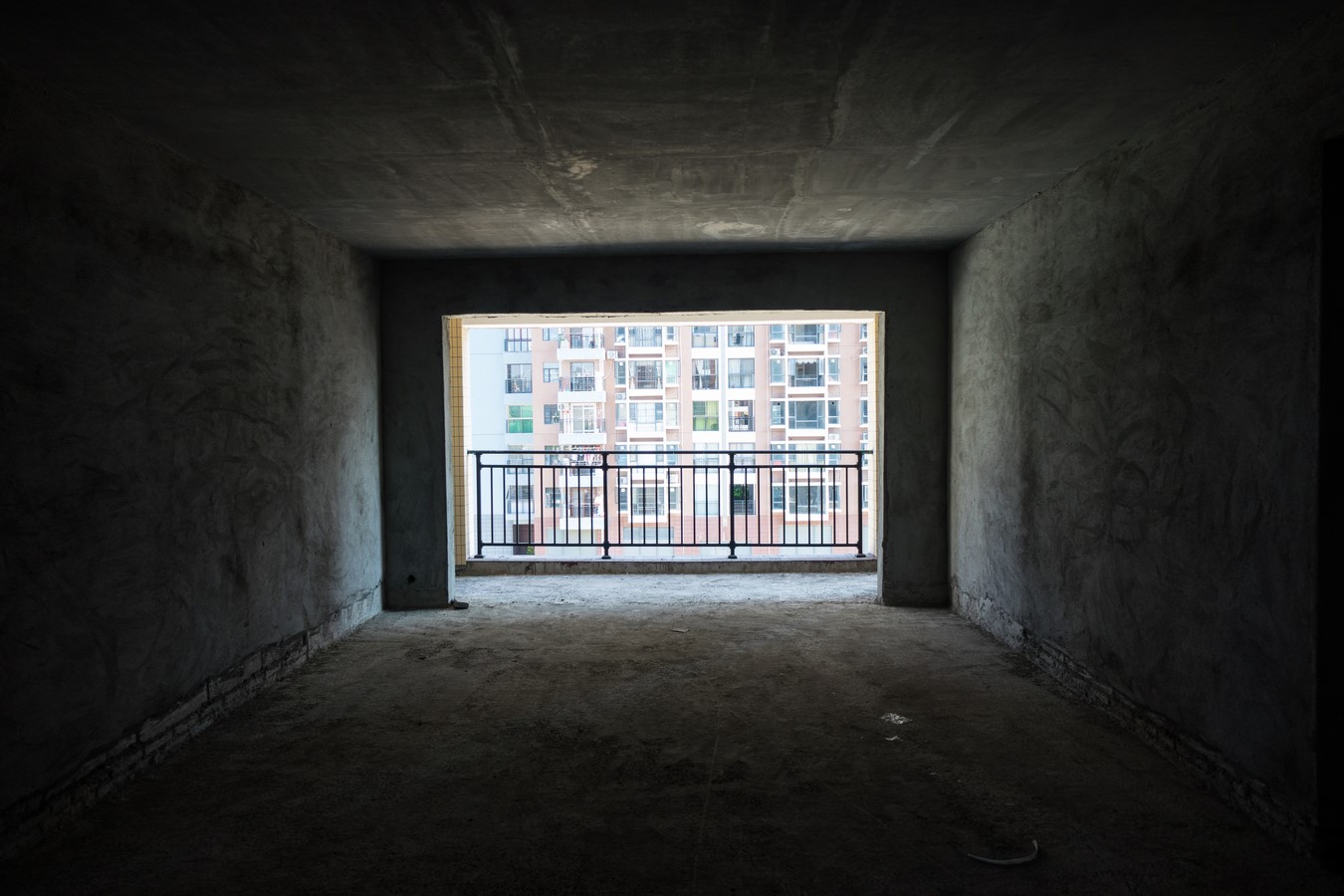 However, to date, the government has not released concrete measures on how to deal with China’s “sleeping towns”.

At Chinese Hallstatt, buses unload droves of tourists every day. “The Chinese are fascinated by European architecture because they can’t go there easily,” said Kinga Nieroda, a Polish painter drawing portraits of visiting tourists and the only Caucasian in town. “That is why they are open to crazy ideas like town replicas.”

While strolling through the streets, a blue sign is prominently visible above the town. Next to Minmetals’ company logo stand the letters for “Chinese dream”, president Xi Jinping’s signature slogan designed to appeal to a new generation of the Chinese middle class. 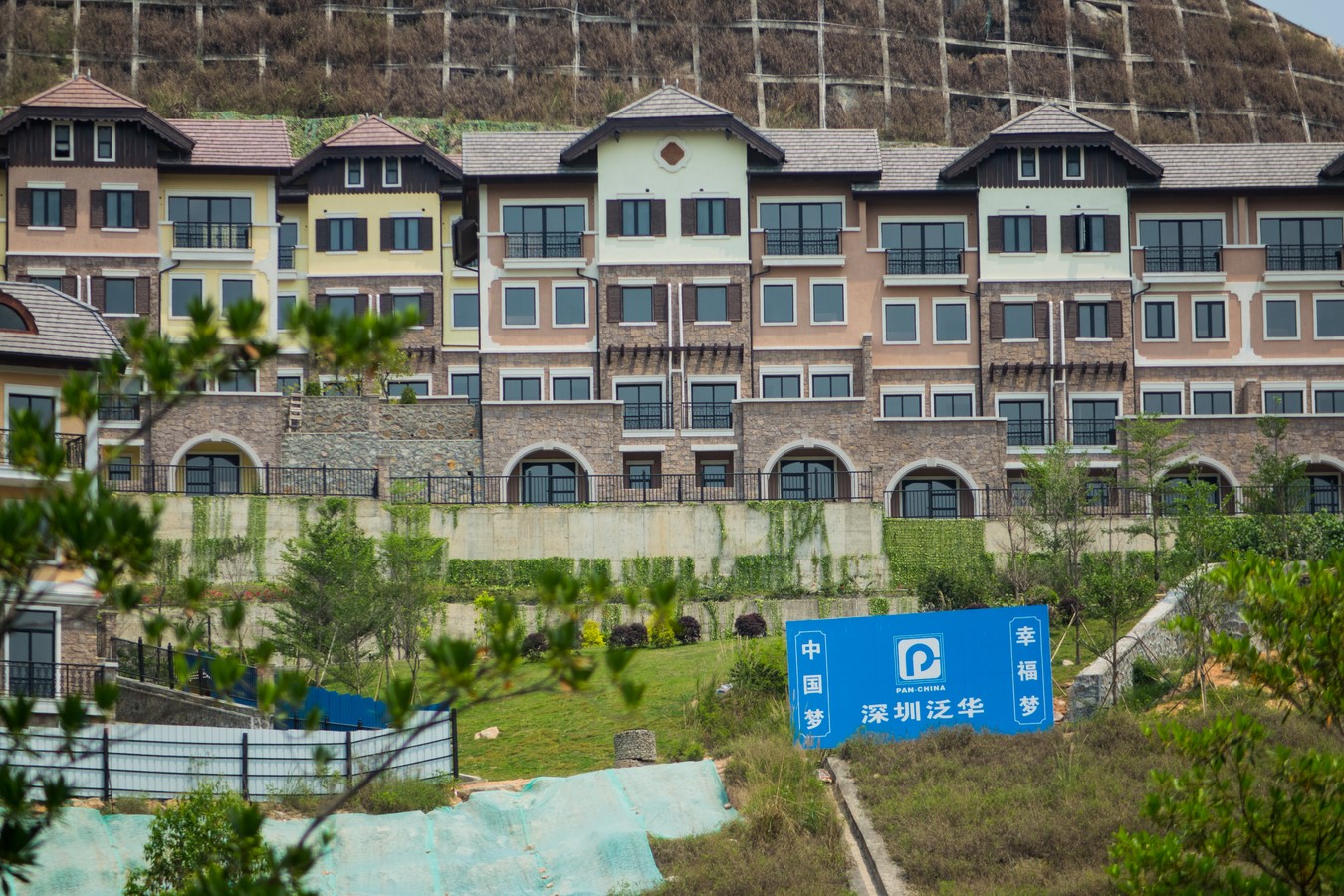 But they come to see, and not to buy. The sales centre inside the church informs that about 65% of the houses built have been sold. None of them is occupied.

Outside the compound, Ms Lu is still waiting for a grand shopping mall for villagers to run businesses the government planned to build within in three years. “It’s been five years and we don’t know where the shops are,” she complained. “Liars!”

Feature: Hallstatt - An Austrian town in China where no one is home