Academics in Australia might reflect on the fact that scholarly books critical of the Chinese Communist Party are now shunned by publishers. Scholars who work on China know that continued access to the country requires them to play by Beijing’s rules, which for most means self-censorship – the dirty secret of China studies in Australia.

Despite refusing to publish my book, Silent Invasion, I am privileged in my access to free speech in a way that most Chinese-Australians are not. 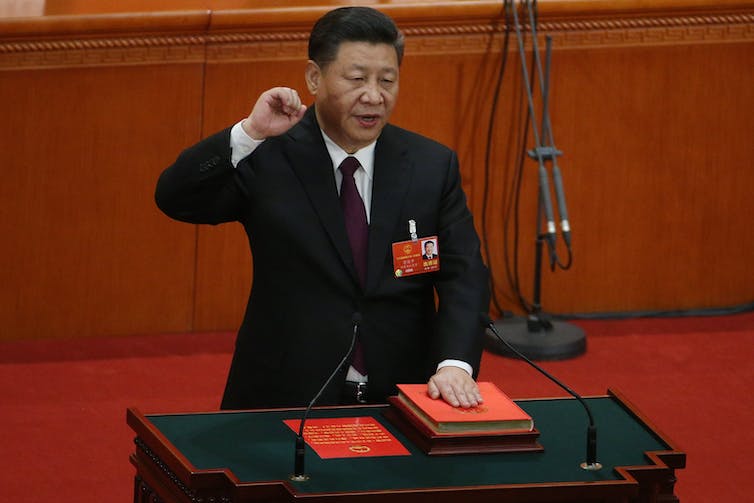 Chinese President Xi Jinping is sworn in for a second term at the National People’s Congress at the Great Hall. Photo: AAP/Wu Hong.

In February, Alex Joske, my researcher for the book and of Chinese heritage himself, wrote in the New York Times that as Beijing’s interference in Australian society intensifies:

… the voices of the Chinese-Australians alarmed by Beijing’s encroachment are being drowned out by an aggressive Chinese government campaign to silence critics here.

Once quite vocal, pro-democracy activists, supporters of Tibetan autonomy, and Falun Gong practitioners are barely heard nowadays. In my book, I describe how this marginalisation has been carried out.

Examples are legion. The New York Times recently reported that Taiwanese workers at restaurants in Sydney have been sacked because, when asked whether they believe Taiwan belongs to China, they say “no”.

It only takes a few examples like this to send a signal to all Taiwanese in Australia to keep their views to themselves if they go against Beijing. This kind of violation of democratic principles — not to mention employment law — has for years been ignored by the mainstream.

Soon after Allen & Unwin pulled publication of my book, a retired businessman phoned. For years he has been taking in Chinese students as lodgers. Recently, he was walking through the CBD with one of those students when they came upon a Falun Gong practitioner collecting signatures on a petition. When he said “let’s go over”, she begged him not to. She kept walking while he signed the petition. Two weeks later, the student’s parents back in China had the Ministry of State Security knocking on their door. They were warned to keep an eye on their daughter, who was creating trouble in Australia.

Think about that. Chinese authorities in Australia are monitoring Falun Gong practitioners on the streets of Sydney and Melbourne, photographing anyone who interacts with them. They can identify any ethnically Chinese person and put them on a watchlist.

In the course of researching my book, I spoke with pastors at Chinese churches in Australia who believe their congregations and community groups have Communist Party agents spying on behalf on the consulate. Some Chinese-Australians cannot even go to their places of worship without Beijing’s vast security apparatus watching and reporting on them.

Few religious groups of modern times have experienced more coercion and violence than practitioners of the peaceful spiritual practice Falun Gong. Working through the consulates, the sinister 610 Office has harassed, threatened and bullied Falun Gong practitioners in Australia and frightened off sympathetic politicians.

Last year, Feng Chongyi, an associate professor at the University of Technology Sydney, was forcibly detained in China for a week while doing research on human rights lawyers. China does not like what he is uncovering and wanted to send an unambiguous message that he should change what he works on in Australia.

It’s important to understand that the effect of Beijing’s suppression of critical voices in the Chinese-Australian community is not confined to pro-democracy and Tibetan autonomy activists. The dominant narrative in the community is now one that supports the Communist Party view of the world. A young Chinese-Australian who wants to enter politics knows that any criticism he or she may make of, for example, party influence operations in Australia will result in bad press and pressure from “community leaders”. If they were to persist, family members in China may receive intimidating visits from state security. It’s much easier to stay out politics.

This is a denial of their democratic rights. It means that Chinese-Australians critical of the Communist Party have no representation in parliament. Who will speak up for them if their family is threatened, or if their business in Australia is sent broke by a boycott organised by the consulate?

Instead of giving these critics of the Communist Party a voice, some of our political leaders have collaborated in their silencing. They shun them, even condemning them when they protest outside the Sydney consulate, while mixing with and responding to “community leaders” who typically head United Front organisations guided by the party through its network of agencies that operate in Australia.

In February, Shadow Treasurer Chris Bowen expressed outrage in parliament because Cambodian Prime Minister Hun Sen had threatened violence against any Cambodian-Australians who staged a protest during his visit to Australia. Bowen declared he would defend the right of Cambodian-Australians to protest and would not allow peaceful protesters to be harassed and bullied.

Good for him. But where is Bowen when Chinese-Australians are threatened and intimidated by China’s state security apparatus in Australia? Where is he when supporters of Tibetan autonomy are drowned out and intimidated on the streets of Sydney?

Bowen is a prominent member of the New South Wales Right faction of the Labor Party and accordingly has been the recipient of largesse from wealthy Chinese businessmen close to Beijing. He has been flown to China at the expense of the Communist Party and an organisation run by Huang Xiangmo, the businessman ASIO warned the major political parties to avoid taking money from.

Bowen has been a patron of the Australian Council for the Promotion of Peaceful Reunification of China, the peak United Front body closely associated with Huang Xiangmo.

As my book appeared in the bookshops, the big beasts of the NSW Right came out to monster me because I have said they are too close to Communist Party front groups and agents of influence. Bob Carr, Paul Keating and Graham Richardson attempted to trash my reputation and make me out as a Sinophobe and closet racist.

They are embarrassed when anyone draws attention to the evidence of the deep penetration of the Chinese state into their part of the Labor Party. They should know that the more they try to shut down critics, the more we will ask what they have to hide.

Like others, I have puzzled over the astonishing level of naivety in this country about what China is doing here.

It doesn’t seem enough to speak, as some have, of being blinded by the money or referring to the natural openness of Australians. For some, it’s almost a wilful unwillingness to see, despite the powerful evidence of China’s aggressive intentions.

When writing Silent Invasion, I anticipated that its arguments would be dismissed as rooted in xenophobia and that I am just stirring a cauldron of anti-Chinese racism. I have a pretty good record of anti-racism over the decades, but for some that counts for little. More to the point, in the book I tried hard to reflect the experiences of those Chinese-Australians who are critical of the Chinese Communist Party and feel threatened by it in their new home.

I discussed with some of them the risk of racist groups misusing the book to reinforce their prejudices. The typical response was: “Well, what’s the alternative? Should you just say nothing?”

The judgement of these Chinese-Australians is that they may have to take some collateral damage to win the larger battle. They are much more worried about the vast apparatus of Communist Party coercion than some wave of anti-Chinese sentiment.

From the moment I began researching and writing Silent Invasion, I resolved to ensure that none of the criticisms I made of the Chinese Communist Party could be construed as anti-Chinese or anti-China.

I knew that nothing I did would deter the party from its usual conflation of the party and the nation. And true to form its spokespersons in Canberra and Beijing have stuck to the party line, attacking the book as “racist bigotry” and “anti-Chinese”.

If you just read Race Discrimination Commissioner Tim Soutphommasane, Chinese Embassy statements, and Beijing’s trolls on social media, you’d think the danger we face in Australia is not Chinese Communist Party interference operations but the risk of inflaming anti-Chinese racism by calling out the party.

The problem lies not in Xi Jinping’s aggressive assertion of a newly risen China, but the stain on our own history. Our first goal must not be to resist growing foreign interference, but to keep the lid on fringe sentiments here. But what of China experts in Australia? Surely they can see what is happening. Most of the serious ones can and have been trying to draw attention to it for some years.

Others, like the University of Sydney’s David Brophy, prefer to put their ideological purity on display. In a ranting “review” of Silent Invasion, he argued that when discussing the Chinese Communist Party’s interference operations in Australia, people like me and the string of China experts who take a similar view have got it all back to front.

For Brophy, when the issue of foreign interference arises, we must not “shift the blame onto China” but “confront our own failings”.

Concern about Communist Party interference in Australia, opines Brophy, actually “reflects a deep malaise in Australian society”. Really? Then Taiwan, Singapore, Canada, the US, New Zealand and several European countries, where the same debate is taking place, must be suffering from the same malaise.

In truth, when someone who is being bullied or violated is accused of just imagining it, we call it victim-blaming.

When Brophy dismisses the mountain of evidence of Communist Party interference in Australia as “imagined subversion”, he shares the assessment of his vice-chancellor, Michael Spence, who has labelled the mounting warnings by the government, based largely on ASIO reports, as “Sinophobic blatherings”.

As I suggest in Silent Invasion, Spence’s University of Sydney is among the most compromised of this country’s academic institutions.

It’s not Silent Invasion, but the reaction to it, that has highlighted something troubling in the intellectual life of the nation. The fault is not an incipient xenophobia ever-ready to burst forth in anti-Chinese racism, as if our universities inherited the culture of the gold fields.

No, the fault lies in the sacrifice of intellectual rigour to the guilt felt by politically correct academics for what happened on the goldfields. For the Chinese Communist Party, this fault is a rich seam to mine in its quest to exert its influence here.

Why does Australia keep turning a blind eye to Chinese political interference?