To promote expressive talent in English, RTHK Radio 3 joined hands with Hong Kong Free Press and PEN Hong Kong for the first time to co-organise the English writing competition Hong Kong’s Top Story 2017. From a record number of entries, the judges selected eight prize-winners in both the Junior and Adult Categories, with two more granted the Most Creative Award. An award presentation ceremony was on Thursday, January 11 at RTHK. The awards were presented by Controller (Radio) of RTHK Brian Chow Kwok-fung, Co-founder of Hong Kong Free Press Tom Grundy, and President of PEN Hong Kong Jason Y. Ng. Head of English Programme Services of RTHK Hugh Chiverton mentioned that the competition had again attracted a lot of talented writers to take part, and that 550 entries from the community were received. He also praised the writers’ high proficiency in English and for turning creative ideas into effective words. 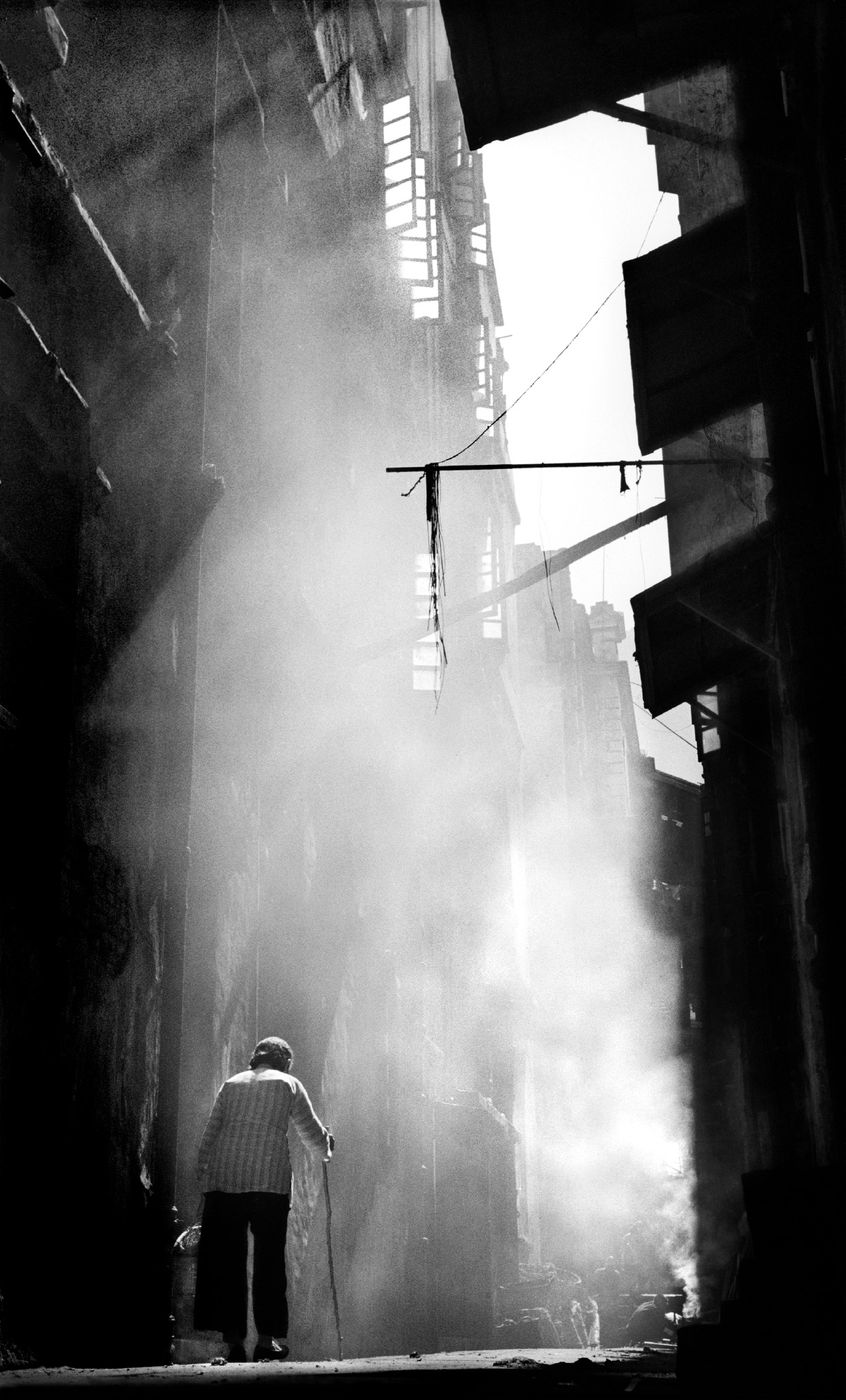 This year, the applicants were invited to write an original story based on a given picture taken by legendary photographer Fan Ho. Winners in  each category were presented with books from Pan Macmillan and dining vouchers from the Lan Kwai Fong Group.

There was white smoke coming from the other end of the narrow alley. Someone was speaking. A man’s voice. Where did it come from?

Ling craned her neck to see what was at the end of the path, but the small movement was enough to send a sharp pain through her back. She leaned on her cane and waited for it to pass. She was tired. It had taken her a long time to find this place. The map on the flyer was too small for her eyes.

The buildings on the sides of the alley had blackened walls and looked abandoned. Some of the windows, though, were open. Not abandoned, then. Ling wondered who lived here. Were they looking out from the windows and watching her?

She continued to walk down the alley. The smoke seemed to have thickened. There was no other noise but the sound of her cane hitting the ground. Tock. Tock. Tock. Slower and more hesitant with each step she took.

But she would not turn back. This was her only chance.

To be young again. To continue living, but without the limitation of her tired body, and the pain, and her failing mind.

She clutched her cane and walked on. She was close now. There were silhouettes of people near the end of the alley. They seemed to be floating in the air. Their heads were almost as high up as —

The bald man on the stairs stood up. “You are late.”

She had also wasted plenty of time to return home and turn off the fire. She still couldn’t believe she had forgotten to turn it off. What was next? How much longer would it be before she forgot how to return home?

“We received your money,” said the bald man. “Come.”

Ling followed him up the stairs to an iron door with no marking. The man unlocked the door.

Behind the door was a steep flight of stairs, only wide enough for a single person. It reminded Ling of the building she used to live in when she was a child.

The man was already quite a way ahead of her. She tried to keep up, but she could only go so fast. The first door she passed by was closed. She rested for a moment and continued to climb up the stairs. Her heart was pounding, both from the walk, and because of what was about to happen.

This could be the final moment of her life.

The final moment of this life, and the beginning of another.

When she reached the second floor, the man had opened the door and was waiting for her. He gestured for her to enter.

“The donor’s here. Talk to her if you want,” he said. “I’ll call once I’ve finished making the final preparation.”

Ling walked through the door to a small room. The man locked the door behind her, then disappeared through the plastic curtains to the right of the room. Along the wall next to the curtains was a long couch. A girl was sitting there and watching television, which was showing a movie by Chow Sing-chi. The girl was dressed in a white and pink stripped hoodie, and a pair of black leggings. Her hair was tied back in a ponytail. She looked to be around 20.

Ling sat down on the couch. Next to the girl, but not too close. There were two paper cups of water on the table. The one near the girl was almost empty; Ling took the other cup. The icy water stung her throat, but she was thirsty after moving around so much, and so very tired. She couldn’t wait to be rid of this useless body, and most importantly, to be saved from the fate of slowly forgetting who she was.

She glanced at the girl next to her again. The girl’s gaze remained on the television. She chuckled at the joke Chow was making, but Ling was not so easily fooled. She did not have children, but she had been a team leader before she retired. She could always tell when the youngsters working under her were nervous.

The girl’s back was too straight, and her hands were clenched together too tightly. She was afraid, but it was only natural. Ling couldn’t imagine how anyone would agree to something like this.

“How old are you?” asked Ling.

The girl did not look away from the television. “Twenty-six.”

Ling hesitated, then said, “Why?’

This was not her business, but it didn’t feel right to not at least ask about it.

Of course it was money. It was the only thing the girl could gain from this deal, after all. It was a good amount of money, too; Ling had to sell her flat to pay for this, but it was worth it. Still, the girl was giving up her body, and essentially her life, to —

“It’s not a guaranteed success. You know that, don’t you?” The girl turned around to face Ling. “I don’t plan on losing.”

It was up for the Switcher to decide; this was what Ling had been told before she signed up. No one knew how the Switcher made the decision, but Ling was confident. The choice would likely come down to comparing their worth, and she had many years of advantage over the girl.

The money would go to the girl either way, regardless of whose body she ended up in. But what good would a failing body like Ling’s do for the girl, even if she had all the money in the world?

Had it been any other situation, Ling would have tried to reason with the girl — she was very good at dealing with youngsters and their foolishness — but not this time.

The man emerged from behind the curtains. “Come in.”

Ling stood up and walked towards the man. The girl followed behind her. They walked down a corridor and into a room. It was filled with a sickly white light, very different from the warm yellow in the waiting room. On the table in the middle of the room was a large box covered by a black cloth.

Or rather, a Switcher. There were seven of them, Ling had been told.

“Take a seat.” The man pointed to the two chairs by the wall. “Donor on the left.”

The girl took the chair on the left without a word, and without even the slightest hesitation. Ling took the other chair. The man put on a pair of goggles — the kind scientists wore — and checked his watch.

“What now?” asked the girl.

The man kept looking at his watch, clearly waiting for something. After a minute or two, he walked over to the cage and pulled off the cloth. There was a black cat inside, with one eye blue and another yellow. No one seemed to know exactly where these cats — and their special power — came from, only that it had something to do with nuclear radiation.

The man opened the cage and let the cat out. “Look into her eyes,” he said.

Ling did as she was told. The moment the pair of blue and yellow eyes turned towards her, she felt a sharp pain in her head. She screamed. Or did she? And then she knew no more.

Ella glanced at the old woman slumped against the chair next to her. “I can’t believe someone actually fell for that.”

Paul took off his safety goggles. “She wouldn’t be the first one.”

“Seriously, a cat that can switch bodies?” said Ella.

Paul bent down and scratched the cat’s ears. “These people are sick and dying. They’re desperate.”

“What did you put in the water?”

“Just something to make her sleep for a while.”

Paul’s casual tone reminded Ella of what kind of people she was dealing with. A friend of a friend who was looking for a “part time actress”. The job turned out to be nothing like what she had imagined, but she couldn’t bring herself to refuse that kind of money. A few more “shows”, and she would have enough for the down payment on her new home with Josh, and with a little more to spare.

She looked back at the old woman. “What will you tell her?”

“Feeling bad about it?” Paul drawled. “Don’t be. She wanted to steal your body, remember? She would gladly take your life so she could prolong hers.”

The Switcher did not exist, but she felt as if she had lost a piece of herself today after all.

Josh would understand why she did this, wouldn’t he? Even with both of their salaries combined, they would never be able to save enough to move out of the coffin-sized flat they rented. But now, they could afford a home of their own, and the thought of having children was no longer a selfish desire. For once, Ella could look to the future and see a clear path instead of a foggy dead-end.

This was worth it. Our most popular tags