Britain opposed a proposal by a businessman to build and repair Iranian navy vessels in Hong Kong during the Iran-Iraq War in 1986, declassified documents reveal.

Peter Wong Man-kong, then managing director of the Chung Wah Ship Building and Engineering Co, told the Hong Kong government in August that year that, as refits of the vessels in the UK were not permitted, the lucrative £75 million contract for three vessels might be available to his company in Hong Kong. The deal may have also included the building of seven new patrol boats.

Through the then-chief secretary David Akers-Jones, Wong asked if there were any objections from the UK. Akers-Jones said the deal was economically “most attractive,” but noted that Wong suggested that, if there were objections, it may have to be done at a joint venture dockyard in Guangzhou. This would mean sharing profits with the city, while it would be difficult to maintain supervision and quality control. Wong is now a Hong Kong delegate to the Chinese National People’s Congress.

Chung Wah was said to have a good relationship with the Hong Kong government, since it supplied crafts to the Hong Kong Marine Police.

After a discussion in the UK, the Foreign and Commonwealth Office (FCO) took the view that the guidelines – which then forbade the supply of defence equipment which would significantly enhance the capability of either side in the Iran-Iraq conflict – should be applicable to dependent territories including Hong Kong.

Many of the spare parts would come from the UK. British firms had been contacted by the Iranian navy but they were advised against taking the job.

“You should also be aware that the export of spare parts from the UK to Hong Kong for use in the building and refitting of the ships would also be subject to the guidelines on defence sales to Iran and Iraq and would in all probability not be allowed,” the FCO said in a telegram to the Hong Kong government.

The records are part of a set of Foreign and Commonwealth Office documents declassified in July this year. They are available to the public and obtained by HKFP from the National Archives in Kew, London. 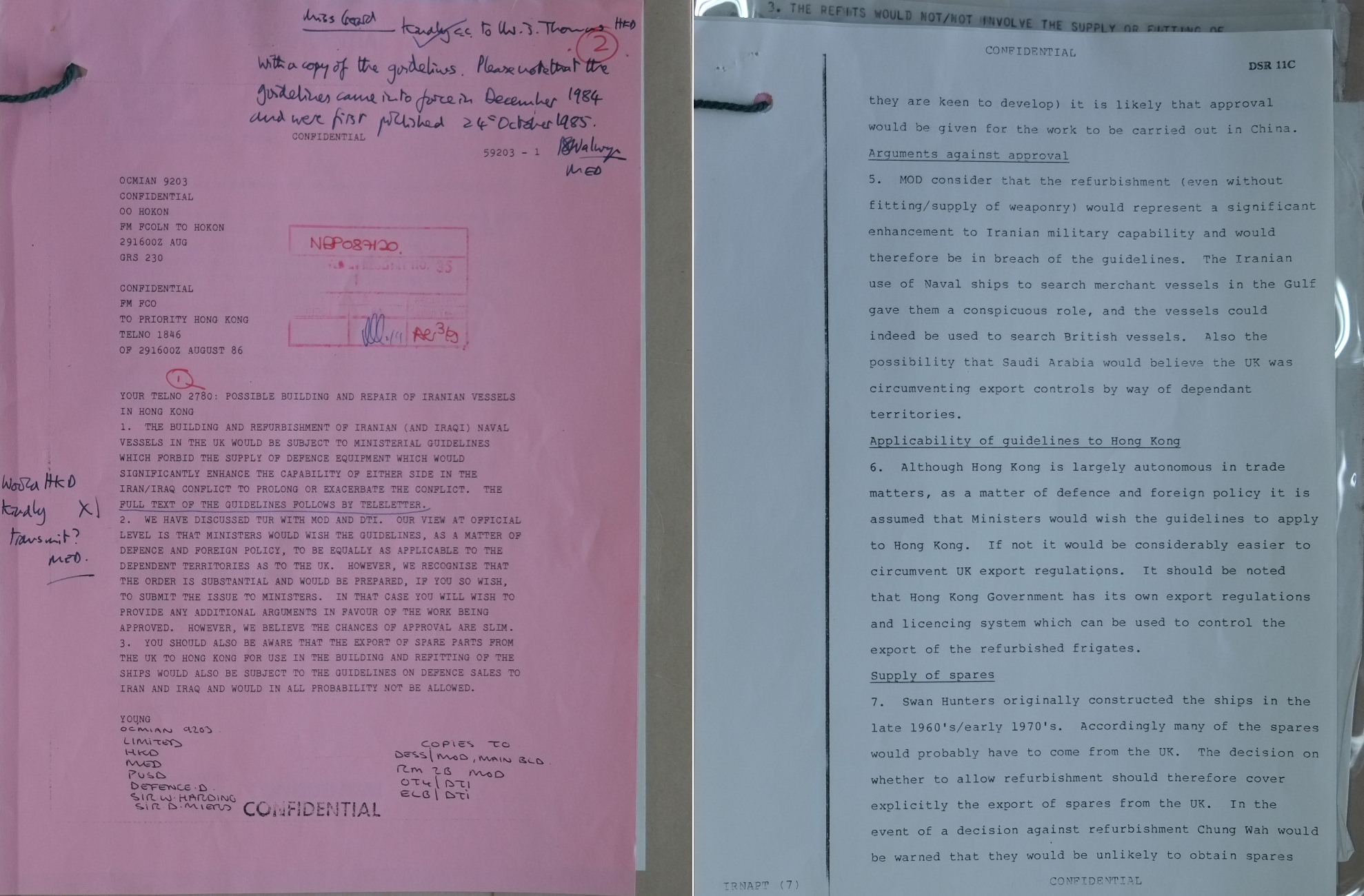 The Ministry of Defence in the UK also opposed the deal being carried out in Hong Kong.

“MOD consider that the refurbishment (even without fitting/supply of weaponry) would represent a significant enhancement to Iranian military capability and would therefore be in breach of the guidelines,” an internal discussion document said.

“The Iranian use of Naval ships to search merchant vessels in the Gulf gave them a conspicuous role, and the vessels could indeed be used to search British vessels. Also the possibility that Saudi Arabia would believe the UK was circumventing export controls by way of dependant territories.”

“In the event of a decision against refurbishment Chung Wah would be warned that they would be unlikely to obtain spares from the UK even if they decided to go for the joint venture with the Chinese.” 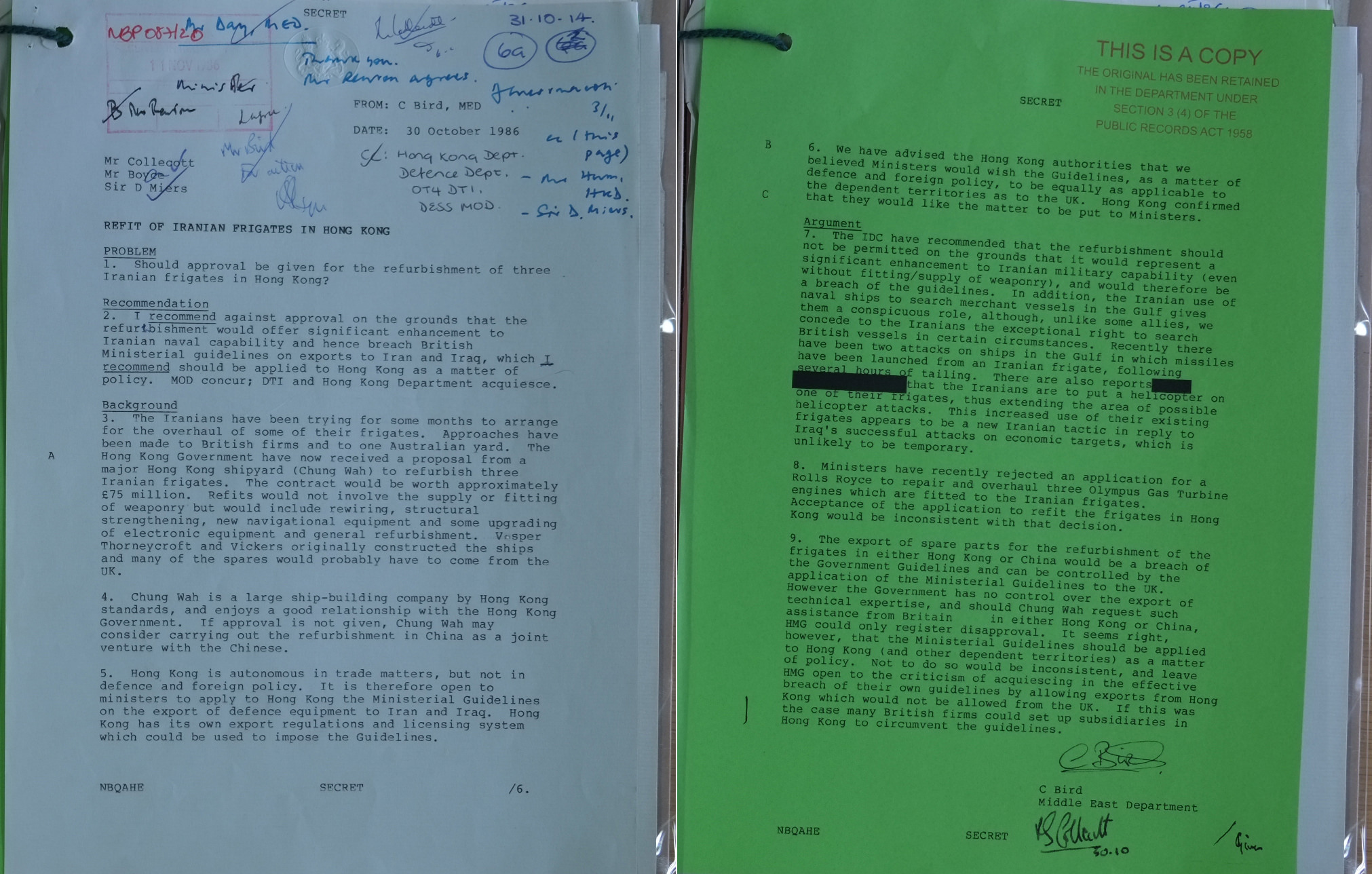 Response from the Middle East Department of the FCO. (click to enlarge). Photo: HKFP.

FCO’s Middle Eastern Department further noted that there were reports of missiles launched from an Iranian vessel, and reports suggesting that the Iranians may put a helicopter on one of their vessels, and these tactics were not consider temporary, thus supplying parts to Iranian vessels would be a breach of guidelines.

But it said the UK government had no control over the export of technical expertise, and if Chung Wah supplied such assistance from Britain in either Hong Kong or China, the UK government “could only register disapproval.”

It added Hong Kong should also follow the guidelines: “Not to do so would be inconsistent, and leave HMG open to the criticism of acquiescing in the effective breach of their own guidelines by allowing exports from Hong Kong which would not be allowed from the UK.”

“If this was the case many British firms could set up subsidiaries in Hong Kong to circumvent the guidelines,” it said.