Christy Song’s story is one of parental neglect, falling in with triads at a young age while seeking their protection, drug addiction and crime. Now 51, she was jailed three times for drug-related offences between 1988 and 2010. In all, she spent 17 years behind bars.

She can still remember the daily routine clearly. After waking up at 6:15 a.m. every morning, the women would complete their chores in their cells and proceed to the factory. Song sewed uniforms for the disciplined services staff and garments for hospital patients, as well as doing bookbinding work for public libraries.

There were frequent fights. “Some people have anxieties and they can’t restrain themselves, so they fight. Others plan fights,” she says. Song also says that prison officers would beat prisoners. “They grabbed your collar and asked “what do you want?” and then they beat you,” she says.

As of August this year, there were 1,764 women in custody in Hong Kong, 1,486 of whom were serving prison sentences and 279 on remand. According to the World Prisons Brief Data, 20.8 % of Hong Kong’s prison population is female. This means Hong Kong ranks first in the world – apart from countries with very small populations – in terms of women as a percentage of the whole prisoner population.

Zhang Wei, who is now 49 years old, came to Hong Kong from Hunan in 1988 after marrying a Hong Kong resident. Like Christy Song she was convicted of drug-related offences and had four spells in prison 20 years ago. She was first arrested and jailed in 1988 and from then until 2012, she served four terms, totalling 18 months. When she looks back, she remembers injustices and unfairness.

For instance, she says, each prisoner could only receive one pack of sanitary napkins every month, and a roll of tissue paper. As this was often not enough for a woman’s needs, Zhang says prisoners shared their napkins with others. She says she saw those who shared their napkins, as well as the recipients getting caught by prison officers, and getting extended sentences as a result.

“That was really unfair. These are part of female’s physiological needs. That prisoners wanted more is not out of greed,” she says. 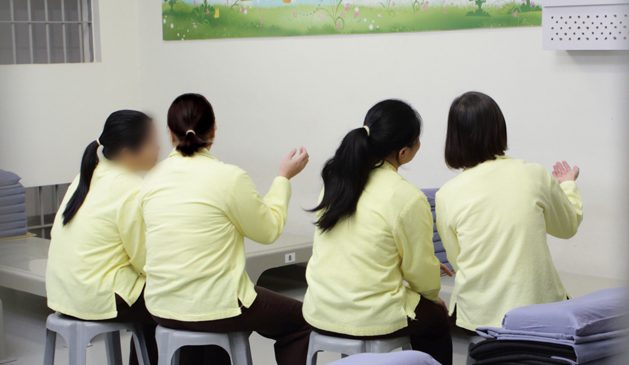 “Prison staff are supposed to punish and educate prisoners, but in my view, there was only punishment,” she adds.

Zhang says she once hit a senior officer when she was in an emotionally distressed state. This resulted in a beating from around 20 officers who had removed their name badges to prevent her from complaining, she adds.

However, Christy Song, who says she witnessed violence against inmates, says she believes she was treated fairly in general. Song says she thinks procedures like strip searches and the violent pinching of prisoners’ arms are legitimate because she thinks that, as prisoners, they deserved punishments.

While people may have different views about whether prisoners deserve such punishment, none would argue that the children of prisoners should suffer as a result of their mothers’ actions.

But some mothers have complained of inadequate arrangements for childcare behind bars. Women who give birth to a child in prison or those who have children under three years old, are allowed to keep their children with them until the completion of their sentence or until the child reaches the age of three.

According to the Correctional Services Department (CSD), a total of 36 women in custody gave birth during their detention in 2016, of which 31 opted to look after their babies in the correctional institutions. 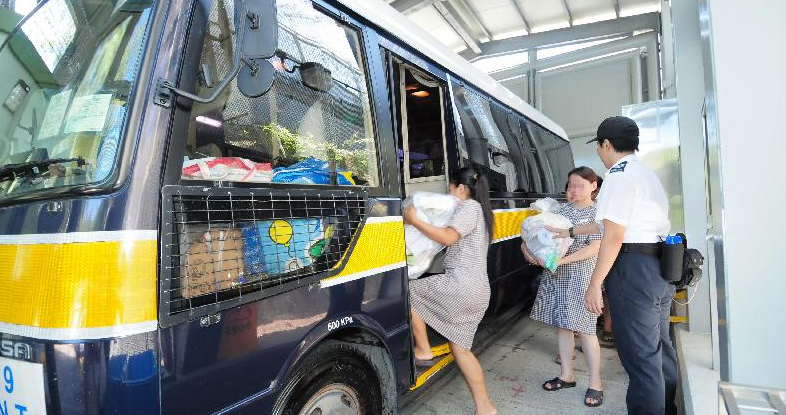 The CSD says all mothers and their infants are accommodated at the baby care unit located in the institution hospital. The CSD provides milk formula while the mothers are allowed to receive baby items such as disposable nappies, clothes and toys from relatives and friends during visits. For those without relatives and friends, the CSD’s Rehabilitation Unit will collaborate with non-governmental organisations to provide assistance.

“But it’s almost impossible for the toys from family members to pass the inspection, so basically the kid has nothing but the mother to play with,” says Venus Lau. The 38-year-old was sentenced to three and a half years imprisonment after getting involved in drug trafficking to pay off her husband’s debts. She gave birth to her youngest daughter in prison when she was on remand in 2010, and raised the child in Lo Wu prison until her release in 2014.

Lau says almost none of the toys her mother sent to the prison for her granddaughter managed to make it through due to strict restrictions on sizes and material. For instance, books have to be completely made of paper, while other toys have to be completely plastic. Also, the age group the items are suitable for has to be printed on the toys. “My mother tried to send toys 10 times, but mostly failed, except once she could send a doll in,” recalls Lau.

In the end, all Lau could do was tell stories and play with her daughter’s pacifiers. She says that as a result, her daughter was slow to learn from her surroundings and experienced anxiety over surrounding objects and noises. She was afraid of drilling sounds, for several months after leaving the prison.

Even though there is a Parent-Child Centre provided by the CSD, Lau says she and her daughter could only visit it once a week, under the supervision of a CSD “guardian”. She also says the toys there were not suitable for young babies to play with, such as toy kitchen sets.

Raising children in jail is hard for a mother, and may have a detrimental effect on the child. “She was born in this environment, and got used to the quietness from the beginning, she did not know what toys are, so it is alright,” sighs Lau. “Of course as a mother, I feel pity for her.”

The reason Hong Kong has such a high proportion of female inmates is because 55 per cent of the women in custody are foreigners, most of whom are jailed for immigration violations such as working while on a tourist visa.

Human rights activists say more non-local women have been jailed in Hong Kong because of the global increase in human slavery, drugs, sex and labour trafficking. They say the government is turning a blind eye to the situation. Anti-human trafficking activists say the government is turning a blind eye to the situation. Photo: Varsity.

Tina Chan, a project manager from Stop Trafficking Of People (STOP), says there are women trafficked from poorer and less gender-equal countries such as Honduras, Columbia, Venezuela, the Philippines and Thailand to Hong Kong being jailed on drug trafficking convictions.

She says there are mainly two types of human trafficking, forced labour and prostitution. She cites the example of a Filipina who was forced to engage in sex work in Wan Chai in order to repay the airfare and costs paid by the trafficker who promised to get her a decent job. Chan says there are also many known cases where women say they were duped by “fake boyfriends”. They may unwittingly commit crime when they help these “boyfriends” to bring luggage to Hong Kong which contains drugs. Apart from drugs convictions, non-local sex workers are also arrested in Hong Kong for breaching their conditions of stay by working without approval from the Immigration Department. A member of staff from sex worker concern group Ziteng, who identified herself as Li, says most mainland sex workers are women in their thirties or above, who are mothers wishing to earn money for their families.

Li accepts that they will be arrested if they are caught breaking the law, but she says police action sometimes involves breaking into women’s flats when they are not working and arresting them without any evidence. She says some women say officers indecently assault them before carrying out official procedures.

Yenni Kwok, a journalist who works on women’s rights issues, says Hong Kong’s justice system is blind to systemic injustices surrounding the experiences of women, especially when it comes to those from marginalised or vulnerable backgrounds.

She says she thinks judges tend to be biased against women, and sometimes ask defendants victim-blaming questions. She hopes the judicial system will become more aware of the issues faced by women and reference how the judiciary in Indonesia tries to protect women by agreeing to conduct gender sensitivity training for judges. Patricia Ho, who has worked as a human rights lawyer in Hong Kong for 11 years, says she has never heard of gender sensitivity training in Hong Kong. She says Hong Kong is two decades behind when it comes to anti-trafficking legislation and suggests it could refer to the Modern Slavery Act that has been adopted in America, Canada, New Zealand and Britain.

Adopting such legislation would bolster law enforcement, and the identification and protection of victims. Ho also says Hong Kong could follow Britain’s example of not prosecuting identified victims of trafficking.

As for female prisoners’ rights, she suggests that prison rules and management practices, such as strip searches, should be legally justified. “It’s insane, but in Hong Kong, those are just seen as standard procedures,” she says.

Some names have been changed to protect identities.

Women on the inside: How trafficking victims and new mothers cope in Hong Kong's prisons