As media across China reported the close of the 19th National Congress of the Chinese Communist Party (CCP) this week, the political event at which President Xi Jinping spoke of the glorious future of a “modern socialist nation,” the country’s Party-run newspapers seemed to careen into the past. With a visual prominence redolent of the pre-reform era, when Mao Zedong had unchallenged dominance on the front pages, this Thursday’s papers featured a large, airbrushed portrait of President Xi.

Here, for example, is the front page of the People’s Daily, the official propaganda organ of the CCP, where the visual representation of Xi’s power and centrality is absolutely unmistakable. The bright red headline running vertically along the left-hand side reads: “Comrade Xi Jinping’s Leads Conference and Delivers Important Speech.” The slightly larger red headlines convey the more crucial fact that Xi Jinping serves as General Secretary of the CCP and as Chairman of the Central Military Commission. The bit to the right of the masthead is a report about U.S. President Donald Trump’s congratulatory phone call to Xi Jinping, suggesting Trump congratulated Xi on “the successful closure of the 19th congress.” 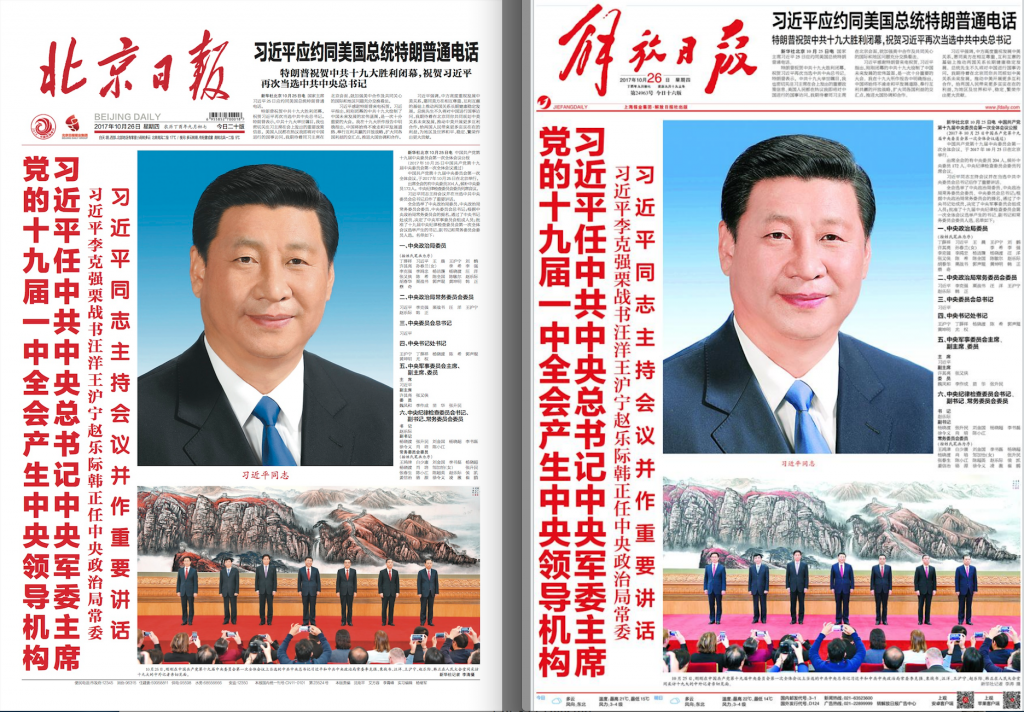 Interestingly, there were just a few exceptions to Thursday’s across-the-board identical layouts. Below is the front page of Nanfang Daily, the official Party organ of Guangdong province, which has traditionally been known for its slightly more adventurous media — the likes of Southern Weekly and Southern Metropolis Daily.

Media in the south have been quite effectively brought to heel under Xi Jinping since 2013 (and the staff walkout at Southern Weekly), but it’s interesting to see Nanfang Daily, which has long been one of the most commercialized of the provincial-level Party papers, going with a more human image of Xi Jinping on its front page. This Xi Jinping seems friendlier and more contemporary, not at all like a leader plucked out of China’s Maoist past.

The headlines are slightly reconfigured as well. The largest headline here is about Xi Jinping’s appointment as general secretary, which is split off from the reference to his position as head of the Central Military Commission. That comes further down at the bottom, just above the image.

Below the image of Xi is a second set of headlines, these dealing with the content of Xi’s address at the press conference closing the 19th congress. The large headline reads: “A New Era Needs a New Atmosphere and Actions.” This being, as the smaller headline just above tells us, something that Xi “emphasized” when meeting with journalists.

Generally, commercial newspapers in provinces and major cities — those spin-offs of Party papers that rely on advertising and circulation to survive — went with the Nanfang Daily-style treatment of the news story (and the only news story) that is Xi. Here, side by side, are Hunan Daily, the official Party paper in Hunan province, and its commercial spin-off, Sanxiang City Express (三湘都市报). What do these different treatments tell us? Most likely, that the most important audience for the retro-Maoist treatment of General Secretary Xi Jinping are the hordes of CCP members who are most likely to be picking up copies of the People’s Daily and the provincial Party dailies.

The rest of China — those who pick up copies of Sanxiang City Express or other tabloids at the newsstand to browse the lifestyle section — they can continue to see Xi in a warmer light.

Pointing to the future, parroting the past: Front pages of Chinese state media after the 19th party congress