McDonald’s in China provoked snorts of laughter Thursday, as internet users mocked a ham-fisted new company name that sounds a lot like the Chinese word for a pig eating.

Earlier this month, the company quietly changed its official name from a transliteration of “McDonald’s” to a new moniker meaning “Golden Arches” — a reference to the business’s famous logo.

It was an under-the-radar decision only intended for official use, not for restaurants, the company said in a statement.

But the move threatened to turn into something of a PR nightmare after an enterprising Internet user uncovered the change in corporate filings.

Social media wags quickly pointed out the word — gong — sounds similar to one that describes a pig snorting and digging in the dirt for food, or “rooting” in English.

It was an unfortunate association for a restaurant that has long sought to dissociate itself from unhealthy eating habits.

By early Thursday afternoon, the hashtag “Golden Arches” had been viewed 2 million times, with many commenters hamming up its porcine associations. 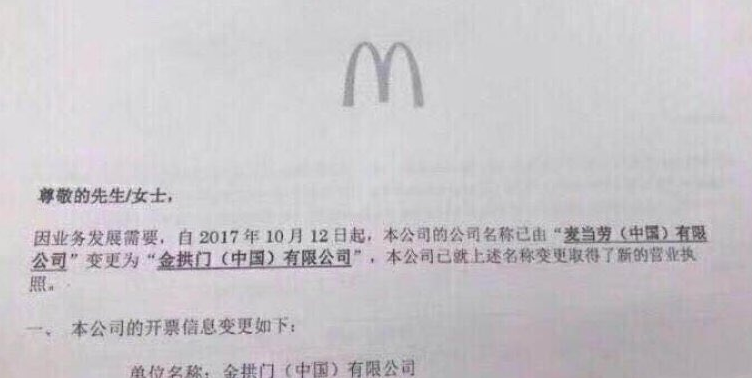 “Thank you for ‘snorting’,” one user named “bundled meat” wrote on Weibo, a play on the words McDonald’s servers often use to welcome customers.

Picking a Chinese name can be difficult for foreign corporations. Airbnb’s Chinese name “Aibiying” meaning “welcome each other with love” has not gone over well with Chinese for its phonetic clunkiness. Max Factor, the cosmetics company, chose a name that to some Chinese sounds like “a buddha wrapped in honey.”

Coca-cola is one company that got it right, transliterating its English name to “kekou kele” meaning “Happiness you can taste.”

A McDonald’s China spokeswoman said in a statement Thursday that the company’s new name is purely a formality.

“The company’s name is only for registration purposes,” the statement said.

“It will have no effect on normal business operations.”