There will be a “dormitory” for mainland officers in the mainland port area of the West Kowloon express rail terminus, according to images and documents obtained by FactWire.

Newly emerged building plans and photos directly contradict the government’s claim that mainland personnel will not stay at the terminus overnight. A room in the mainland port area on the third basement level is labelled as “port control security staff dormitory” in Chinese. It is translated as “security staff rest room” in English below. Photo: FactWire.

When approached for comment, the Department of Justice insisted on Wednesday that mainland personnel would not remain at the station overnight.

Meanwhile, the Transport and Housing Bureau replied that the “security staff dormitory” had been changed to a “rest room.”

But FactWire can confirm that the room still bears the sign “security staff dormitory” after the bureau’s reply. The room is still being fitted out with a false ceiling and electronic equipment, according to an anonymous informant who provided the images.

Comparing the photos with the leaked building plans from the MTR Corporation and the July 2016 revised version of the Mainland Customs, Immigration and Quarantine Office (MCIQ) Master Layout Plan, the dormitory is about 430 square feet in size and is located on the third basement level (B3), which falls under mainland jurisdiction. 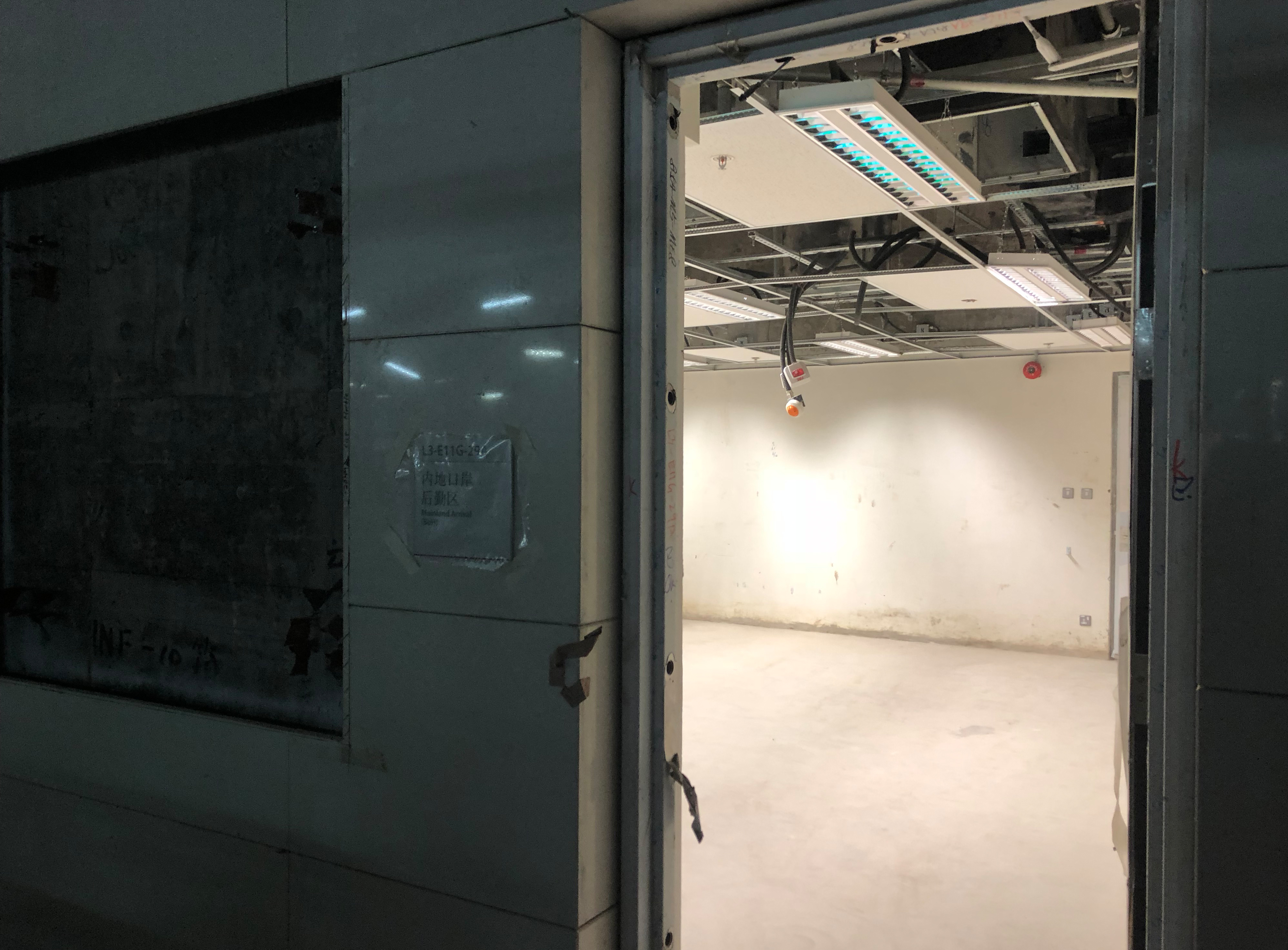 Looking from the boarding lobby, there is a sign that says “mainland arrival (BOH)” – BOH meaning back of house – outside the door to the dormitory.

A source, who is involved in the construction of the West Kowloon terminus, told FactWire that the room was named “security staff rest room” in English. However, the Chinese version of the name – which literally means “dormitory” – should prevail as both the Hong Kong and mainland sides have been communicating on the design in Chinese. Mainland authorities also finalised the layout plans in Chinese.

The source also said there was a “customs rest room” – which was also translated to “rest room” in English – in the mainland port area according to the same layout plan.

As both the layout plans and the use of each room were approved by mainland the authorities, there should be no ambiguity in the Chinese names. 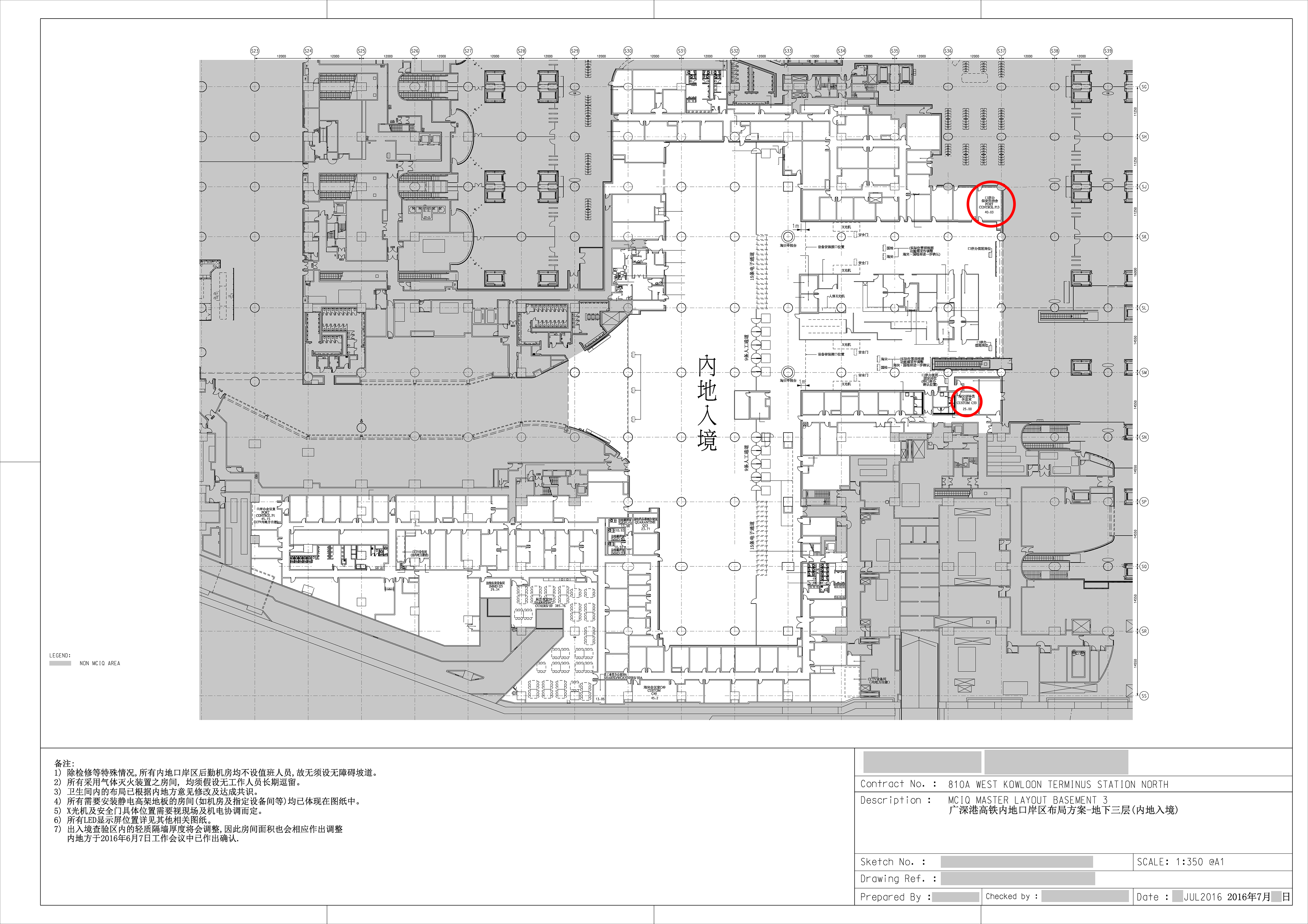 The Department of Justice told FactWire on Wednesday afternoon that it “had no information” on whether the “security staff dormitory” would be used by mainland officers as overnight residence or whether the government would allow such use.

“According to information we currently have, mainland personnel at the West Kowloon terminus will commute to work from the mainland, and go back to the mainland by high-speed trains. They will not stay at the station overnight,” a Department of Justice spokesperson said.

He did not answer as to whether the Hong Kong government could intervene to prevent them from staying after the station is closed.

The Transport and Housing Bureau said on Wednesday that the “security staff dormitory” had been changed to a “security staff rest room” and insisted that there would be no overnight residence facilities for mainland officers working at the station.

However, FactWire can confirm that the room is still signed as “security staff dormitory” as of Wednesday afternoon after the bureau replied. Facilities including detention rooms and rest rooms had appeared in various floor plans for the West Kowloon terminus exposed by FactWire and Chinese-language newspaper Ming Pao in March, raising concerns that mainland personnel may stay in Hong Kong overnight.

However in July, a few news outlets then reported that mainland personnel would not stay overnight, citing government sources.

At a press conference on the joint checkpoint arrangement held on 25 July, Secretary of Justice Rimsky Yuen Kwok-keung told reporters that mainland personnel working at the West Kowloon terminus would commute from and to the mainland by train everyday and would not remain in the city overnight. On Wednesday, the Legislative Council is debating a non-binding motion on the co-location arrangement for the Guangzhou-Shenzhen-Hong Kong Express Rail Link. The motion, which was put forward by the government, will be passed by Legco if it gains support from half of the legislators.