Lester Shum and Demosisto’s Joshua Wong are among 20 democracy activists found guilty of criminal contempt after failing to comply with an injunction to clear the Mong Kok Occupy protest site in 2014.

Shum, along with League of Social Democrats Vice-chairman Raphael Wong, were charged with criminal contempt of court. Raphael Wong and eight others pleaded not guilty, while Joshua Wong, Shum and nine others admitted to the charges. Judge Andrew Chan found all 20 guilty on Friday at the High Court, though the sentencing will be heard at a later date. In October 2014, a minibus company successfully applied for an injunction from the court to ban demonstrators from occupying streets in Kowloon. The police arrested people who were suspected to have violated the injunction after obstructing bailiffs at the scene in November that year.

“We were definitely disappointed by the verdict,” Shum said outside court. He said Chief Executive Carrie Lam did not care about young people’s interests: “She only cares about how [President] Xi Jinping feels and whether she can execute Beijing’s orders.”

He added that he believed more “political prosecutions” were in store, and that they were prepared for imprisonment. 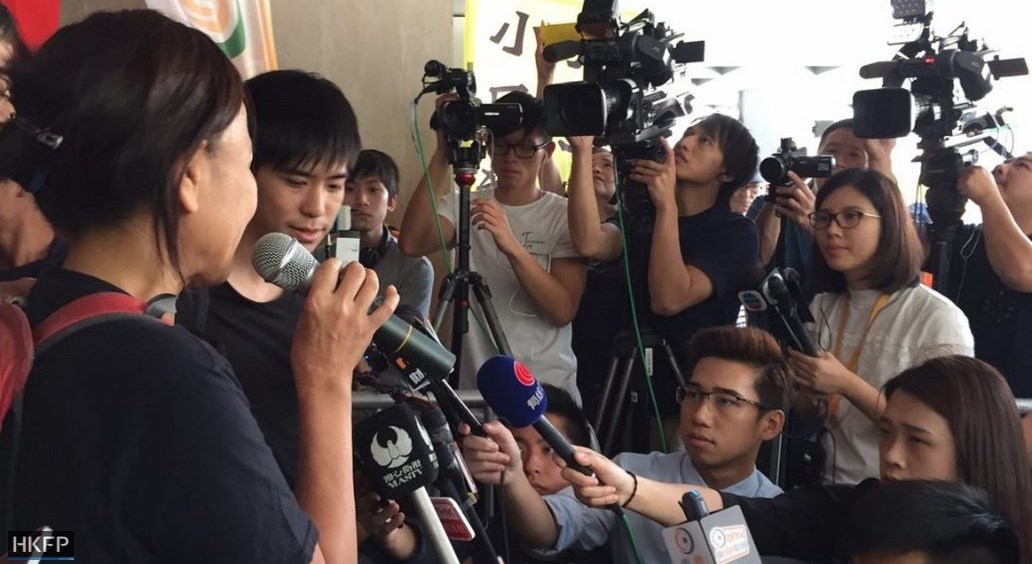 Shum previously said that his guilty plea was to “show responsibility.”

The court said that Raphael Wong had sought to incite the crowd to continue their defiance by repeatedly questioning the bailiffs and plaintiffs’ solicitors during the clearance: “If Mr Wong had any questions or doubt regarding the scope or validity of the terms of the Amended Injunction Order, he could have sought further directions or clarification from the Court,” a summary handed to journalists said.

It said that, according to video footage, Wong’s presence and challenges “created enormous burden for the Bailiffs and the Plaintiffs’ agents… [causing] interference with the clearance operation.” Both Joshua Wong and Raphael Wong are currently serving time in prison for their involvement in two other 2014 protests — the Civic Square clashes that preceded the Occupy protests, and the demonstrations outside the Legislative Council against the controversial northeast New Territories development plans.

Joshua Wong, who turned 21 on Friday, will be transferred from Pik Uk Correctional Institution to an adult prison.

Mak Ying-sheung –  a master’s student at Lingnan University – was also found guilty. She said that she became an intern reporter with online news outlet In-Media in November 2014 and was reporting on the clearance, rather than participating in the protest. The court noted that Mak was not wearing a press pass.