The government plans to remove all rubbish bins from country parks by the end of the year in order to encourage hikers to take their own trash with them.

Following an event commemorating the 40th anniversary of the establishment of country parks on Sunday, Director of Agriculture, Fisheries and Conservation Department Leung Siu-fai said that – even if the plan proves ineffective – the rubbish bins will not be reinstalled.

He added that he hoped the public will understand that they should be prepared when heading to country parks. They should not expect that facilities like rubbish bins and bathrooms are readily available as is the case in urban areas, he said. The initiative is aimed at encouraging the public to take their own trash with them when they go hiking.

The department implemented the first phase of “Take Your Litter Home” programme in country parks in September 2015, and found that the amount of trash in five locations fell by at least 70 per cent. 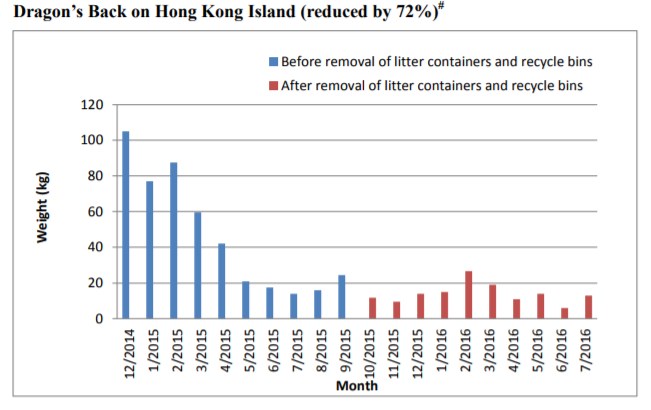 Last year, the second phase was implemented and 256 bins were removed from country parks at the end of the year.

District Councillor and environmentalist Paul Zimmerman told HKFP that he fully supported the initiative, but had reservations. He said that clearly identifiable designated litter disposal points are still required in “areas where people congregate and consume such as BBQ areas, camping areas and village enclaves.”

“For BBQ, camping and village areas there should be clear directions to the nearest disposal point with boat or vehicle access for the cleansing crew,” he said. He also said that there should be “clearly identified and well-advertised litter disposal facilities” at cross points of hiking routes and public transport: “People should be able to dispose of their litter before boarding public transport – it is unrealistic to expect people to have dry waste only.”

“Where these cross points are located outside areas under the control of the AFCD, it must have clear agreements with FEHD or other departments to provide these facilities. AFCD must take responsibility for its visitors and park users beyond the boundaries of their land,” he added.