The Office of the Ombudsman has criticised the Lands Department for failing to take action concerning a village house which illegally occupied government land for over 20 years.

In its latest direct investigation report published on Tuesday, the government watchdog said that the conditions of the short-term waiver granted to village houses were also breached, and unauthorised structures were erected on private agricultural land.

The Ombudsman said that, in 1994, approval was granted to the initial owner of the land to construct a village house. Under the waiver conditions, the village house could only be used for self-residence, and could not be transferred or leased. However, the house was sold – along with the agricultural land – by the initial owner after its completion, the report stated. The second owner carried out a number of unlawful extension works. 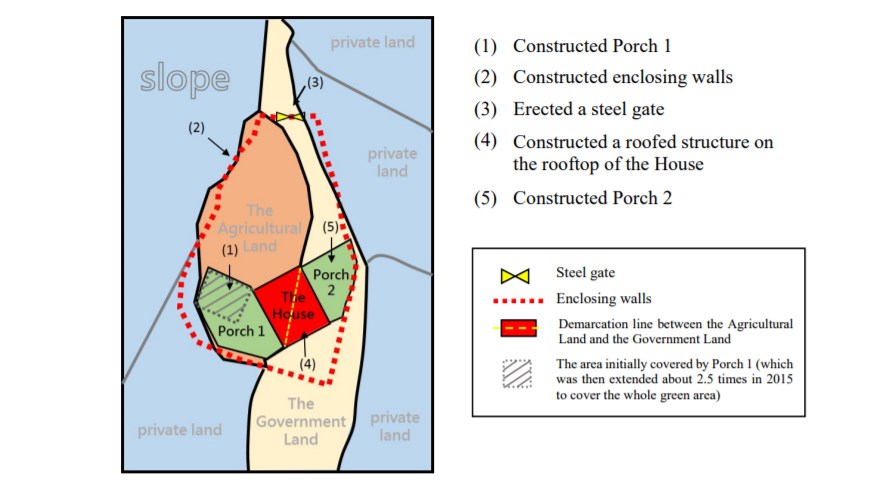 Between 1999 and 2003, the new owner of the agricultural land carried out a number of unauthorised extension works. Photo: Ombudsman.

It is currently occupied by a third owner.

The local District Lands Office had failed to note the problems when they first inspected the house in 1995, the report said, and when the New Territories Action Team took over in 2007 it failed to take action until 2014.

As a result, it continued, serious and complicated cases have remained outstanding for years. However, it noted that the action team recently revised its strategy to give priority to long-standing cases.

According to the complaints office, the Lands Department defended its inaction by saying that the case was not given high priority, posed no hazard or was not urgent.

“We find those reasons hardly acceptable,” the Ombudsman said, adding that the Lands Department had “for years turned a blind eye” to the enclosure of government land that hindered villagers’ access.

It also said that the Lands Department “never set a timeframe for enforcement actions, and that is tantamount to connivance at persistent offence.”

The Ombudsman recommended that the Lands Department set a target completion date for processing each case, and step up its enforcement efforts. Should the irregularities persist, it urged the Lands Department to “demolish the unauthorised structures and re-enter the land, so as to eradicate the problem once and for all.”