“China engages with the UN on human rights but often with the goal of aggressively silencing criticism and eroding access for activists who work on China,” HRW chief Kenneth Roth said in a statement. The Human Rights and Alliance of Civilizations Room, used by the United Nations Human Rights Council, in the Palace of Nations (Geneva). Photo: Wikicommons.

He acknowledged that China was far from the only country misbehaving at the United Nations.

“But its Security Council membership, global influence, and fierce crackdown on civil society at home make it a model of bad faith that challenges the integrity of the UN rights system,” he warned.

His comments came as the rights organisation launched a new report detailing Chinese efforts to harass independent activists, mainly from China, who attempt to participate in UN human rights forums.

He urged “relevant organisations (to) remove their tainted lenses and view China’s human rights development and contributions to international human rights causes in an unbiased way and stop  groundless accusations.”

In its report, HRW accused Chinese officials of routinely photographing and filming activists on UN premises, in violation of UN rules, and barring Chinese activists from travelling to the UN Human Rights Council in Geneva.

Beijing has also used its clout to block non-governmental organisations critical of China from receiving UN accreditation and has managed to blacklist accredited activists from taking part in UN events, the report said.

Taken together, the Chinese actions “amount to what appears to be a systematic attempt to subvert the ability of the UN human rights system to confront abuses in China and beyond”. 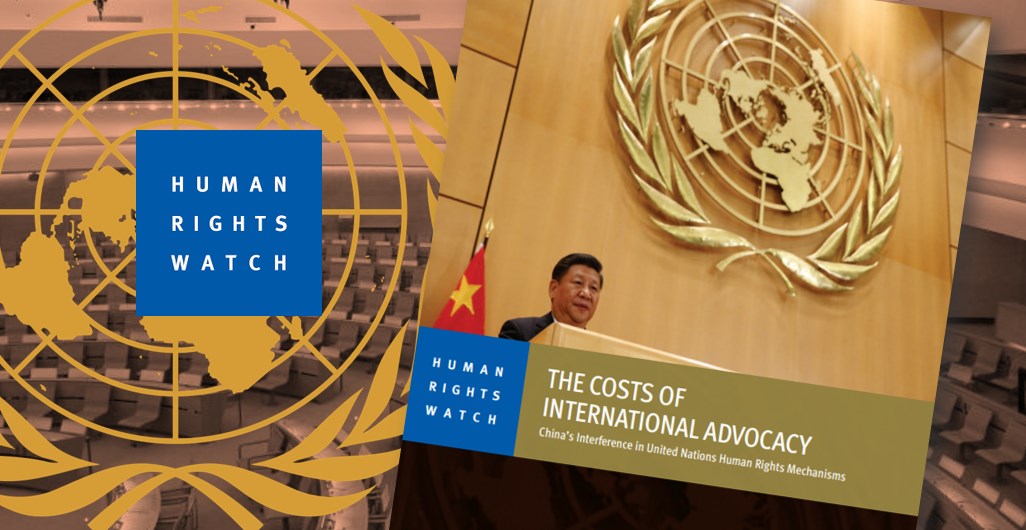 In the most shocking case, Chinese authorities detained activist Cao Shunli in 2013 as she attempted to travel to Geneva ahead of a UN review of China’s rights record.

She died in custody.

With China scheduled for the next so-called Universal Periodic Review of its human rights record in 2018, HRW voiced concern that many Chinese activists might opt to stay away.

Cao’s death “sends a signal to anybody who dares to stand up to Xi Jinping and his government,” Roth told AFP.

UN Human Rights Council spokesman Rolando Gomez insisted the body had been “extremely vigilant in addressing and investigating all acts, and perceived acts, of intimidation, threats, (and) attacks brought to its attention.” In Cao’s case, the council president had “raised her detention directly with the Chinese ambassador in Geneva as a possible example of reprisal by a state against someone cooperating with the UN,” he told AFP in an email.

HRW’s report acknowledges that some UN officials push back against pressure from Beijing, but added that in other cases officials have “capitulated… or have soft-pedalled their concerns, presumably to avoid confrontation with China.”

It pointed to the example of well-known ethnic Uyghur activist Dolkun Isa who in April was ejected without explanation from the UN headquarters in New York, despite being accredited to participate in a forum on indigenous issues.

A few months earlier in January, when Chinese President Xi Jinping visited Geneva, UN officials took the unusual step of sending home many of the 3,000 staff members at the UN European headquarters and barring NGOs from attending his speech.

“Unless the UN and concerned governments put a stop to China’s efforts to manipulate or weaken UN human rights mechanisms, the UN’s credibility and indeed its ability to defend rights in China and around the globe are at risk,” Roth warned.