In 2015, Hong Kong-Portuguese artist Joao Vasco Paiva was selected by Art Basel for one of its site-specific installations, called “Encounters,” for the Hong Kong edition of the fair.

True to his eye for the poetic, and the hidden stories behind common, every-day objects, Paiva decided to highlight the ubiquitous polystyrene boxes that are used for transporting food in Hong Kong. He cast a mountain of them in acrylic on stone resin mounted on a galvanised mild steel structure, and called it “Mausoleum.”

It was a sight to behold – not least because you couldn’t help but think of the exact same stacks of boxes, with the exact same stripes of colourful sticky tape to hold them together, piled outside of every supermarket and wet market in Hong Kong, which, of course, was the artist’s point. 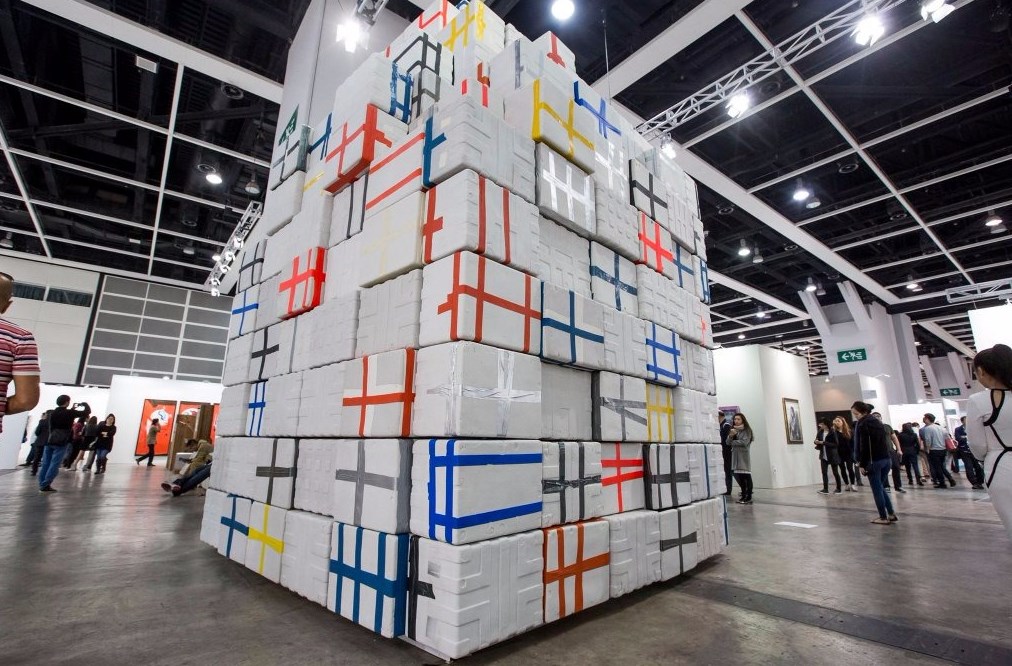 By giving it a high-sounding name, though, Paiva also wanted to spur reflection on what we, as an era and society, will be leaving behind to future generations. Watching that stack of boxes two years ago felt grim enough – the sad confirmation that what we are leaving behind is mostly a huge amount of indestructible plastic – but little more than a week after Typhoon Hato has battered Hong Kong, it is clear that Paiva’s vision was optimistic.

The omnipresent polystyrene boxes will not be left behind in such a jolly fashion, colourful ribbons and all. The waves smash them into millions of pieces and pellets, and the rising tides deposit them on the beach. Then, the wind scatters bits of polystyrene all around.

They are not just unsightly– but quite toxic, for the fish, turtles and birds that nibble on them, for the land and water they contaminate, and for how the toxins then enter our bodies by being present in the food chain.

Why so little is done about it is a bureaucratic mystery. Just a walk around any Hato-affected beach shows that, in spite of having sent in a few extra cleaners, the government is relying on the waves of volunteers from local NGOs that organize community clean-ups to do the job (like Plastic Free Seas, for example).

This time, though, Typhoon Pakhar disrupted many volunteers’ plans, and the rubbish and plastic is still left to fester on the beaches. 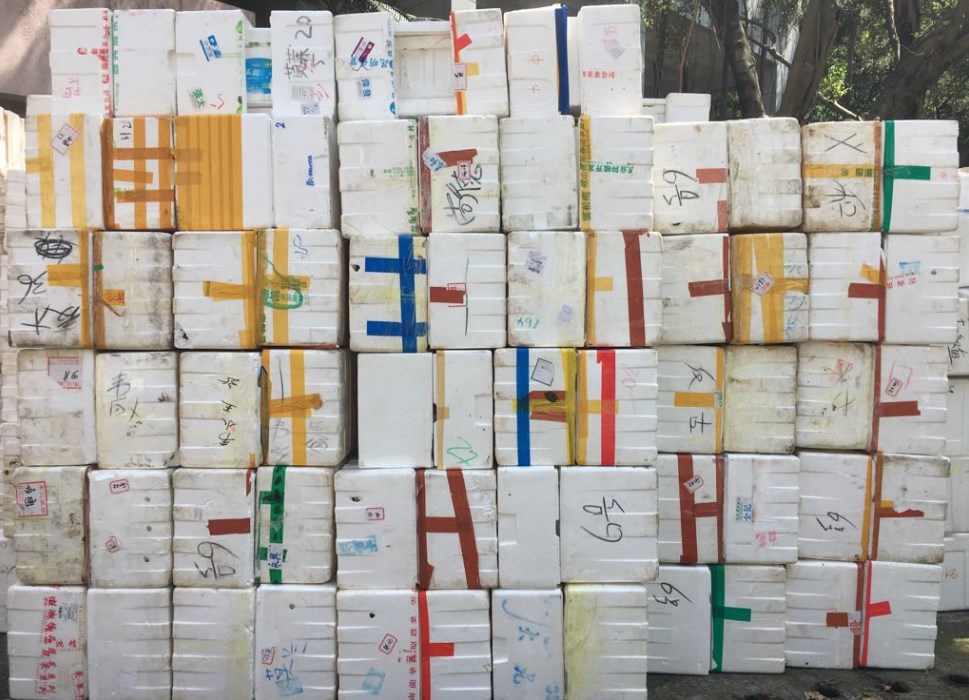 The problem is part of a huge issue that Hong Kong is talking about, but not really addressing: according to various studies, the city throws out 2,000 tonnes of plastic a day. To that, we should add the hard-to-quantify amount of plastic that washes up in Hong Kong waters, originating from the mainland or from vessels sailing in the harbour and dumping waste into the ocean (an illegal practice, of course, but one very hard to police and crackdown upon).

In 2009 the Hong Kong government, after long discussion, decided to introduce the Plastic Bag Levy – by charging 50 cents to consumers who do not bring their own bag and request one with handles.

Still, no government pressure has been put on grocery stores, restaurants, coffee chains or take-aways to stop excessive plastic packaging, to limit the amount of plastic bags with no handles that are wrapped around various items, to do away with plastic straws and cutlery or to stop putting plastic lids on hot drinks consumed on the premises.

And in spite of the numerous NGOs and volunteer clean-up activities, Hong Kong has so far seen no consumer groups organize protests to dump PET (polyethylene terephthalate) containers at the counter, to at least sensitise the supermarkets to reduce and recycle the so-called “clam shells” they put around fruit and vegetables.

And recycling, in Hong Kong, is not mandatory, just recommended in quite a light tone, and for items like batteries and mobile phones, mostly. Trying to live with “zero waste” in Hong Kong is an enormous challenge.

And then, there is the polystyrene problem. Hong Kong does not produce much of its food, and imports most of it from the mainland and from further afield.

It all arrives in the Paiva-style boxes, which are appreciated for their lightness, relative sturdiness, and impermeability, but which fly around, and into the seas, at every typhoon – and on less dramatic weather events, too.

Here too, the government has the possibility to take a two-pronged approach to the problem: reduce the number of polystyrene boxes that are allowed to be used, and allow local farms a greater role, in order to reduce the distances travelled by our food. For the time being, it is not doing either. 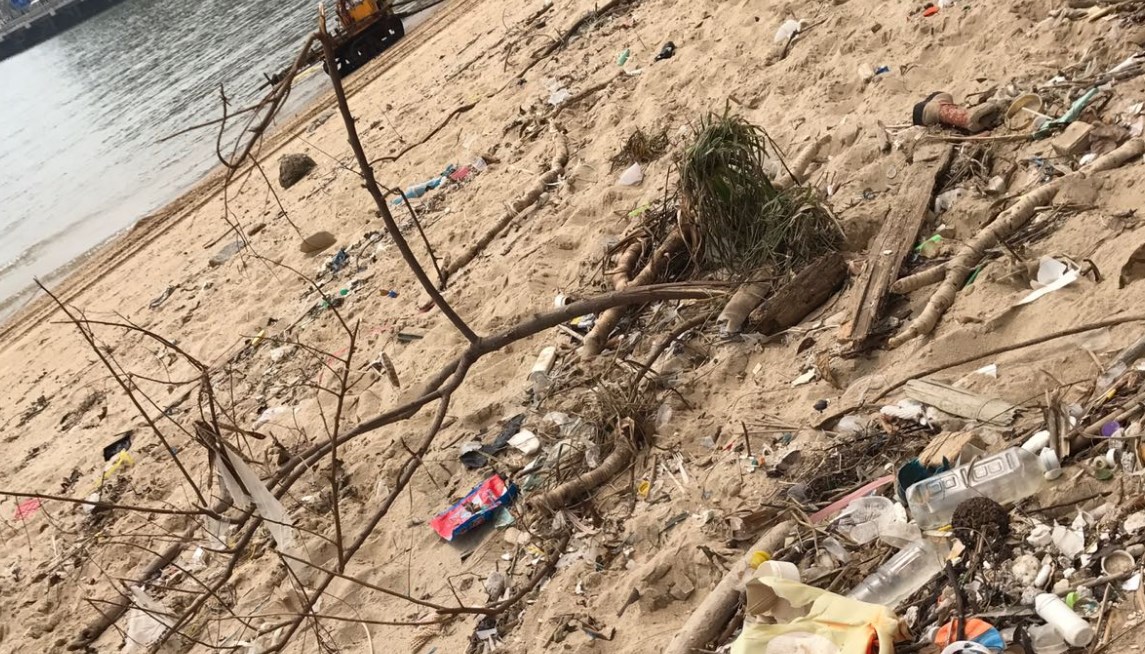 On the contrary: while the government has, in principle, been promoting organic farming, it has so far granted space to what, elsewhere, would amount to organic gardens, while evicting farmers for real estate redevelopment.

Thirteen young people are currently in jail for their effort to protect farmland and villages from exactly that. And Hong Kong imports 90 per cent of all the food it consumes: mostly from China. Mostly carried in polystyrene boxes.

The Mausoleum that Hong Kong seems likely to leave to the future generations are extreme density high-rises and endless plastic waste.

Hong Kong's bequest to the future: A mountain of polystyrene and plastic