Sandy was merely curious when she wrote her first post on the online dating forum. Sex work was the forbidden fruit – enticing, kinky, definitely taboo.

Late one night, after a friend in the industry briefed her on legal issues and gave her tips on how to please a client, she decided she wanted in. The next morning, she used a forum to self-promote, and by nightfall, she had her first customer. It was as simple as that. The compensated dating industry is what makes sex work in Hong Kong unique. There is no shortage of men willing to pay for companionship and sex, and business is booming – one recently-busted ring had over 100,000 members.

The industry is supported by internet forums and apps like WeChat and Instagram, where prices are negotiated. The ease of the system has girls in Hong Kong turning to compensated dating as a source of extra income; the authorities now see it as a serious problem.

Hong Kong Police Chief Inspector Frances Lee King-hei of the Family Conflict and Sexual Violence Policy Unit said last year that the accessibility of the market endangers the girls involved in it. Many of the girls were “forced to perform sexual favours they didn’t want to, were raped or more,” she was quoted as saying.

Despite its popularity (or because of it), part-time sex work like compensated dating is thought to be riddled with exploitation. But women who work in the industry view it differently: for them, it’s often synonymous with confidence, empowerment, and easy cash.

The notoriety of sex work is something that has both emotional and legal consequences for workers in the industry. Lee, a spokesperson for the sex workers’ rights organisation Zi Teng, says that lingering stigma against the industry has influenced the laws that govern it and cut off workers’ rights.

“If there is no more stigmatisation or discrimination, we believe the government may be more willing to do something for sex workers,” she says.

The police’s approach to compensated dating has largely been preventative. Chief Inspector Lee said in an email that “police do not maintain data regarding the number of persons engaging in compensated dating,” but the trend is being tracked in other ways. 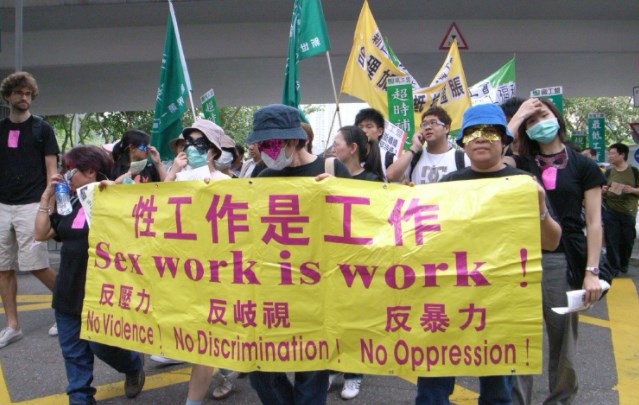 Between July 2015 and February 2017, police arrested 22 men involved in compensated dating, for crimes ranging from “procurement of persons under 16 for making pornography” to “living on earnings of prostitution.”

The force maintains a cyber monitoring programme and is also trying to combat compensated dating through seminars for parents, teachers, and students. Chief Inspector Lee added that the key point of these seminars was to emphasise “the pitfalls of compensated dating”.

Meanwhile, Sandy – who has been doing compensated dating since August last year – is both cheery and completely unabashed about it. At the very beginning, she decided to be open about her work rather than be cowed by stigma.

Now her Facebook page – captioned “Be a slut and do whatever you want” – has over 9,000 followers, and she has been featured in several Chinese-language news outlets. However, she still makes an effort to hide her real name, saying that previous news reports have resulted in a barrage of cyber-bullying.

“In the past, I’ve been a firm believer in the motto ‘sex work is work,’” she says. A solid chunk of her income comes from this side job – in the past nine months, she has made at least HK$70,000 from compensated dating. By day, she’s also a freelance graphic designer, and tutors English for students taking the Hong Kong public examinations.

Sandy’s Facebook posts range from critiques of government policy to introspective monologues on love and sex. These posts are viewed with horrified awe by the students of the university she attended, to whom she has become something of an urban legend. But she still hopes to use these accounts to bring something new to activism. While police and activist groups clash over the perceived risks of compensated dating, the legal quagmire created by these differences in opinion has been tough on the sex workers themselves. Current legislation severely restricts sex workers, who (amongst other things) are not allowed to promote their services in public spaces, work in groups, or lease a workspace.

Most laws related to sex work are intended to prevent brothels and pimping, but they can have unforeseen effects on the women. For instance, Section 137 of the Crimes Ordinance forbids reliance on the income of another person’s sex work. This law seems reasonable – preventing pimps from operating – until you consider its implications.

For instance, Sandy says that girls can sometimes get into physically violent situations because they are unable to hire a bodyguard to protect them.

This isn’t a ringing endorsement for the “sex work is work” argument, but Sandy says the risks are lower for freelancers. She’s had a couple of near misses with clients who wanted to skip using protection, but has managed to avoid worse situations.

“I put my wallet into my bag and said if things get really bad, I can just go,” she says, narrating the story of one of the scarier incidents. “I don’t mind walking into the corridor naked. Protecting myself is the most important issue.”

Twenty-five cases of violent crime against sex workers were reported by the Census and Statistics Department in 2015, although 225 cases of verbal or physical abuse were brought directly to Zi Teng that year. The discrepancy is telling, but Lee says these cases are part of the ‘occupational risk’ of the job; as in any job, they can be avoided with proper training.

This training is one of the services Zi Teng provides, alongside medical and legal help. The organisation teaches girls how to monitor sexual transactions and be aware of occupational risk. Unfortunately, most compensated dating women see themselves as part-timers rather than prostitutes, and don’t come to Zi Teng for help.

“Many sex workers, including the compensated dating women, they sometimes overestimate themselves and also the situation,” Lee says. Without a knowledge of how to handle such situations, women are often blackmailed or tricked into having unprotected sex.

But what about women who are forced into the industry by financial trouble? Lee puts it succinctly: “Everyone needs money, and everyone needs to earn a living. Sex workers also need money. If it’s somehow forced by living conditions or living environment, then all people in the world are working involuntarily.”

Sandy says that this “damsel in distress” attitude is common to most of her conversations with clients, who always begin by asking why she needs help. “It really annoys me, because of course there are some girls in deep financial crisis, but she’s selling something, she’s not asking for help.”

The combined efforts of media coverage and NGO activism have put a dent in the stigma over the years. Lee is cautiously hopeful about society’s change of heart. “Quite a number of years ago when we visited the sex workers, their neighbours would ask us to leave, saying we should not help these women,” Lee says. “But now if we go, we seldom meet these type of situations.” In some districts, local shop owners will even warn roadside prostitutes if the police are in the area, allowing them to escape and avoid identity checks.

After eight months in sex work, Sandy has come to understand the real problem with compensated dating: it’s just too easy. “Younger girls can be myopic,” she says. “They think sex work is already lucrative enough so they’re not learning any life skills or putting anything new on their CV, and they end up broke.”

The money is what keeps Sandy in the industry, despite her day job as a freelance graphic designer. Doing compensated dating, she says, can buy her two or three years to cultivate new skills and interests.

“As long as you have a pussy, you can make quick money,” she says. “I don’t understand why people don’t like it. It’s not that bad. It’s a little weird, but it’s not that bad.”

Sandy’s name has been changed.

Compensated dating: Social problem or a road to empowerment and easy cash?