At least nine people were killed when a 6.5-magnitude earthquake struck southwestern China, state media said Wednesday, but the toll was expected to climb as news trickles out of the remote mountainous region.

But China’s National Commission for Disaster Reduction estimated that as many as 100 people may have perished, based on past census data of the sparsely populated region.

Elsewhere, stunned people were seen milling about on debris-strewn streets, fearful of going back inside in case of aftershocks.

At least one aftershock, measured at 4.2 magnitude by the US Geological Survey (USGS), hit the region shortly after the main quake.

Early on Wednesday, a 6.3-magnitude earthquake shook northwest China’s Xinjiang region, thousands of kilometres from Sichuan, according to the (USGS).

It struck at around 7.30 am (2330 GMT) and was followed by two aftershocks of 5.2 and 5.3 magnitude, but there were no immediate reports of damage or casualties from the remote area.

The Sichuan temblor was centred near Jiuzhaigou, a valley designated as a national park and UNESCO World Heritage Site and which is famed for its striking scenery, karst rock formations, waterfalls and lakes.

Xinhua said at least five of the deaths occurred in Jiuzhaigou, adding that more than 34,000 people were visiting the popular tourist site at the time.

It said, 31,500 tourists had been relocated to safety. The National Commission for Disaster Reduction estimated that more than 130,000 houses may have been damaged, based on a preliminary analysis of the disaster in Sichuan province.

President Xi Jinping called for “all-out efforts to rapidly organise relief work and rescue the injured people”, according to Xinhua.

Restaurant owner Tang Sesheng fled her establishment in Jiuzhaigou town after she felt the earth moving under her.

“I was also in Jiuzhaigou in 2008 during the last big quake, so I knew what it was. This felt even stronger,” she told AFP by phone.

Tuesday’s quake occurred in the same region as a massive 8.0-magnitude earthquake that struck in 2008, leaving 87,000 people dead or missing.

The Jiuzhaigou quake’s epicentre was 284 kilometres (176 miles) north of the provincial capital Chengdu — were the earthquake was reportedly felt — and struck at a depth of 10 kilometres, the USGS said.

Tang said people had come out of their homes to sit out in the town’s large public square, far from any tall structures, while others sat in cars, thinking it even safer.

“People didn’t dare grab anything like money or clothes — we just all ran outside right away, ” she added.

Xinhua said a landslide at the tourist site left more than 100 visitors trapped, but no deaths or injuries were reported among them.

The People’s Daily posted video footage on Twitter reportedly showing tourists cut off in the area lighting a campfire to keep warm at night.

It also posted photographs of people sleeping under blankets on streets in the area.

Some houses at the scenic spot collapsed following the quake and authorities were organising young people to help evacuate residents, a staff worker at the park told Xinhua.

Hundreds of fire officers and soldiers have been deployed, the People’s Daily said. 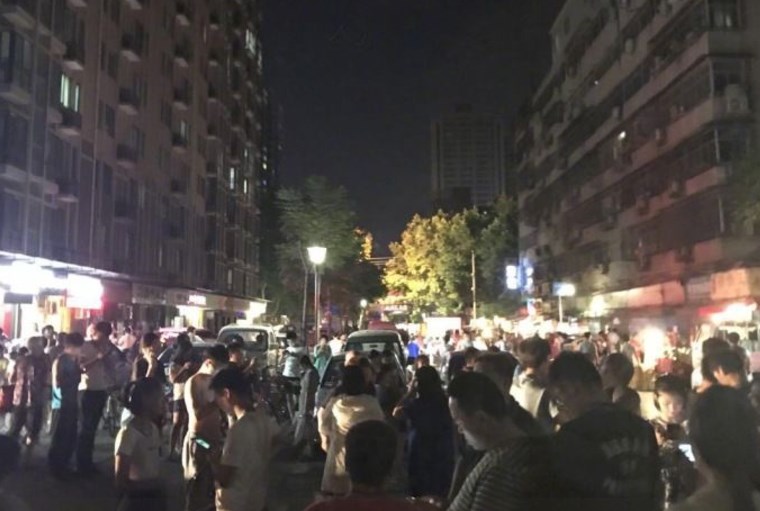 The Red Cross Society of China said it was deploying emergency specialists and volunteers to assist affected communities.

“It may take some time to learn the extent of damage and casualties,” said Gwendolyn Pang, a spokesperson with the International Federation of Red Cross and Red Crescent Societies in China.

China is regularly hit by earthquakes, especially its mountainous western and southwestern regions.