Recently released records of a meeting between former US president George Bush and UK prime minister Margaret Thatcher in 1989 show that both agreed on the importance of protecting strategic interests by avoiding involvement in the Tiananmen protests.

Bush was in London on June 1, 1989 as part of an official visit, just days before the Tiananmen Massacre in Beijing.

“President Bush said he was fascinated by current developments in China. He had been criticised in the United States for not inciting the kids to man the barricades in Peking. But he thought it important to avoid rhetorical overkill,” an extract from the meeting records reads. “Britain and the United States both had very important strategic interests in China. Any direct interference in Chinese affairs would be resented. We did not want to drive the Chinese into the arms of the Soviets.”

A large proportion of the extract, probably comments from Thatcher, is redacted in black ink.

“The Prime Minister commented that if the President had encouraged the students, any subsequent clamp-down would be blamed on [redacted],” it read.

The record was in a set of Home Office documents about Hong Kong and the issue of British citizenship that was declassified last year. It is available to the public at the National Archives in Kew, London. 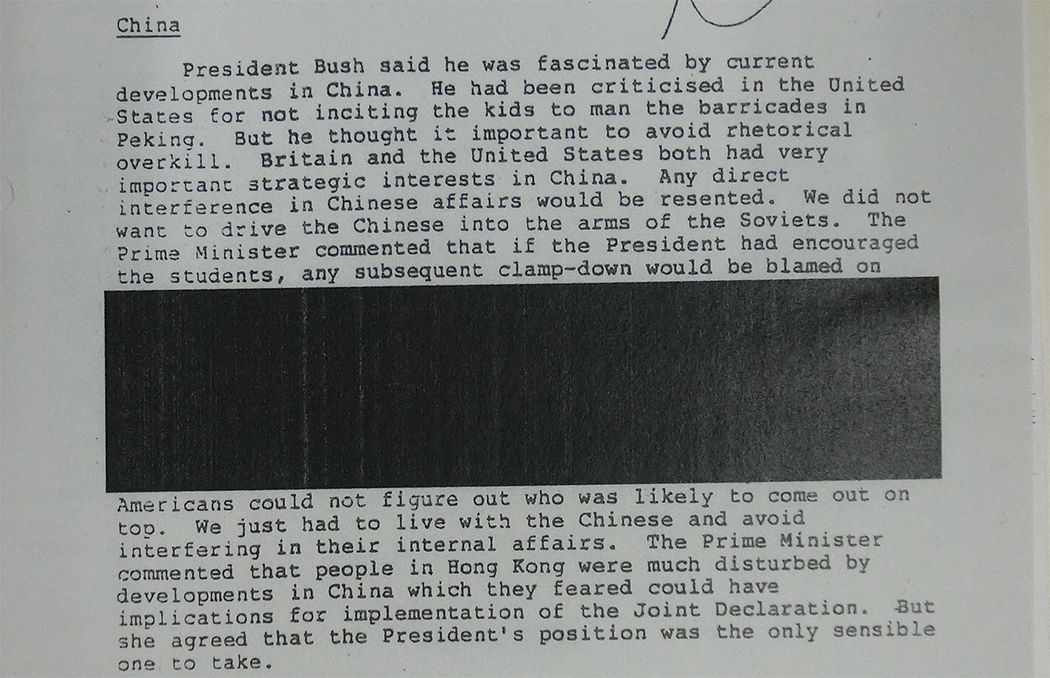 “[The] Americans could not figure out who was likely come out on top. We just had to live with the Chinese and avoid interfering in their internal affairs,” it continued.

“The Prime Minister commented that people in Hong Kong were very much disturbed by developments in China, which they feared could have implications for implementation of the Joint Declaration. But she agreed that the President’s position was the only sensible one to take.”

Thatcher also gave Bush “an account of the difficulties being caused for Hong Kong by the influx of Vietnamese boat people.”

“We simply cannot let this continue. Unless the Geneva Conference on Refugees came up with a solution involving repatriation, we might simply have to prevent any further boat people from landing. The President asked a number of factual questions but made no other comment.”