Four Hong Kong pro-democracy legislators disqualified from their seats by a government legal challenge have packed up and left their offices on Friday afternoon.

Two weeks ago, the High Court ousted Leung Kwok-hung, Lau Siu-lai, Nathan Law and Edward Yiu over the ways in which they took their oaths of office last October. The Legislative Council Secretariat ordered them to pack up and vacate their offices in the legislative complex by 5pm Friday. A total of six lawmakers have been ousted since Beijing’s interpretation of Hong Kong’s Basic Law last November to clarify how they should have taken their oaths.

See also: ‘Long Hair’ says he will appeal court ruling that disqualified him as legislator

Veteran New Territories East lawmaker Leung has held his seat since 2004. His assistant Figo Chan told HKFP on Thursday that his team packed up over 100 boxes of books in his 10th floor office. “That doesn’t include his protest items and props, or his documents,” said Chan. “So we’ve been packing for a very long time.” 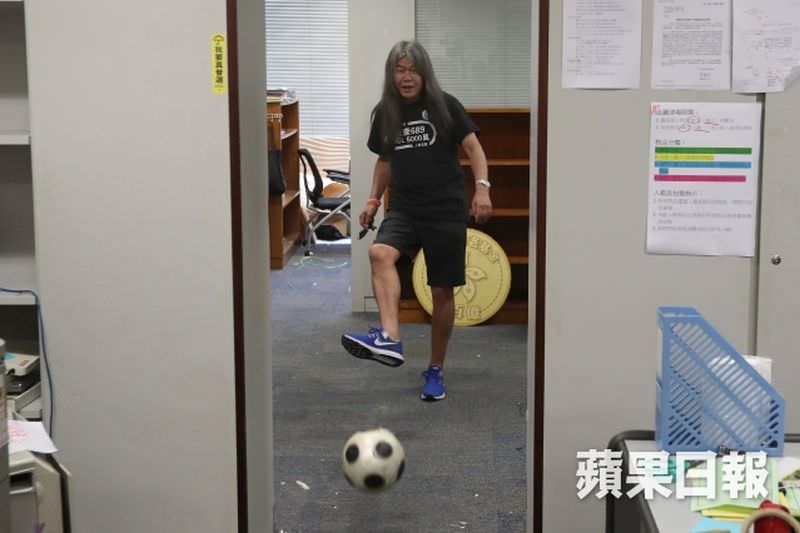 Leung told Apple Daily on Friday that fellow pro-democracy lawmakers Ray Chan and Fernando Cheung have offered to hire him as a consultant so he can continue to work in the legislature. 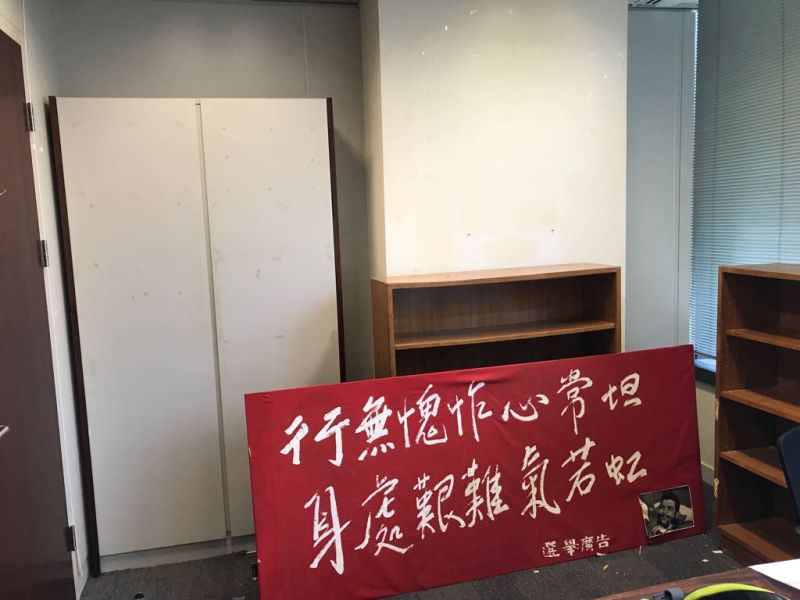 Outside architectural sector lawmaker Yiu’s 9th floor office on Friday was a sticker reading “I want true universal suffrage” – a slogan from the 2014 pro-democracy Occupy protests. 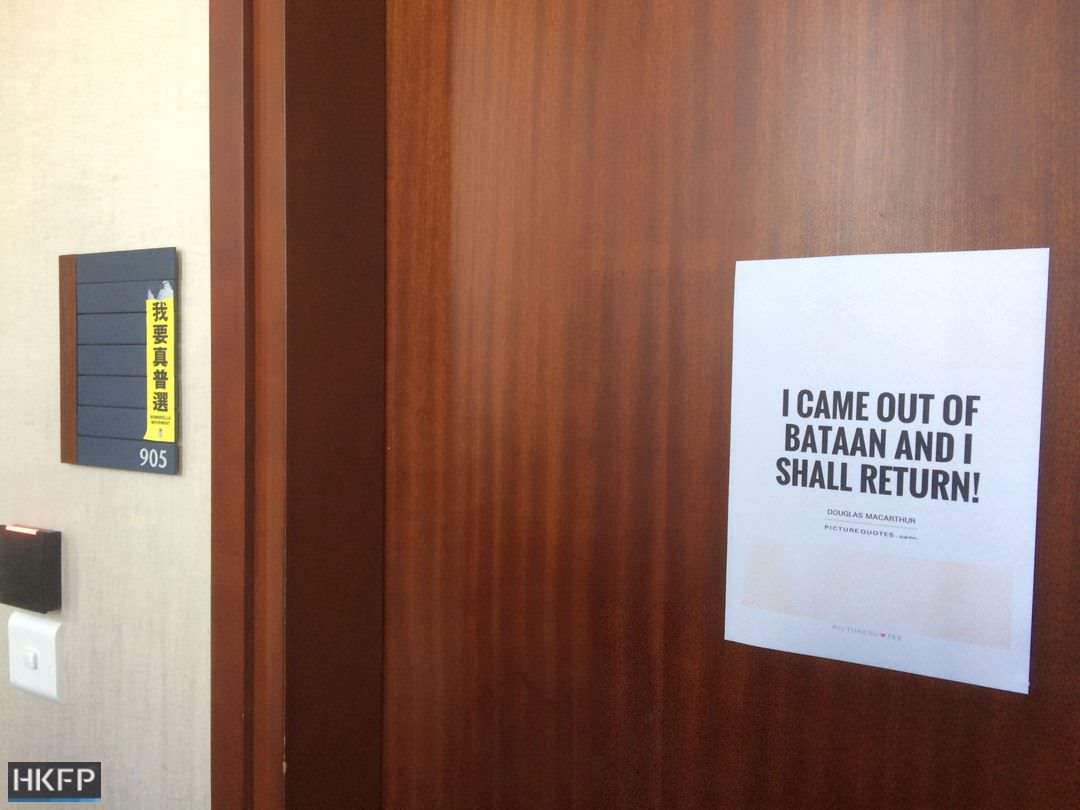 Taped to his door was a quote from 20th century American general Douglas McArthur when his troops were forced out of the Philippines during the Japanese invasion in WWII: “I came out of Bataan and I shall return!”

The former Chinese University of Hong Kong professor said on Thursday that he may not appeal the High Court decision to oust him, but wished to run in his sector’s by-election to regain his seat. 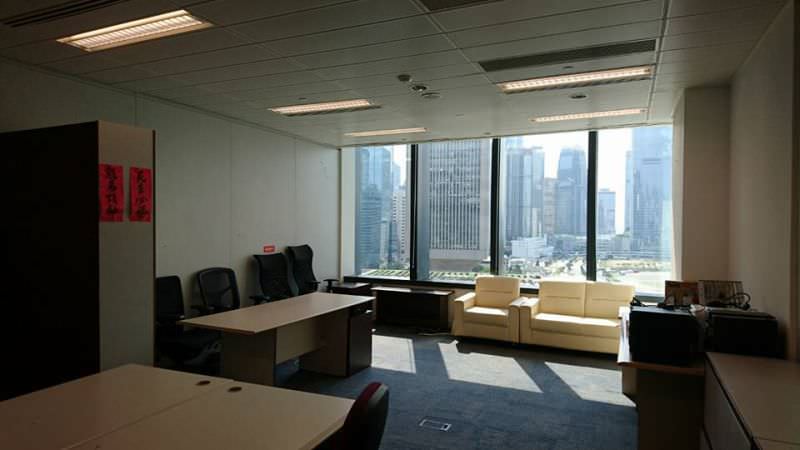 According to RTHK, he left behind five desktop computers, three laptops and one tablet computer, which his team bought using the legislature’s operating expenses.

“The sky is blue outside – I should go out and take a walk,” he wrote on Facebook. “I’ll be back soon.” 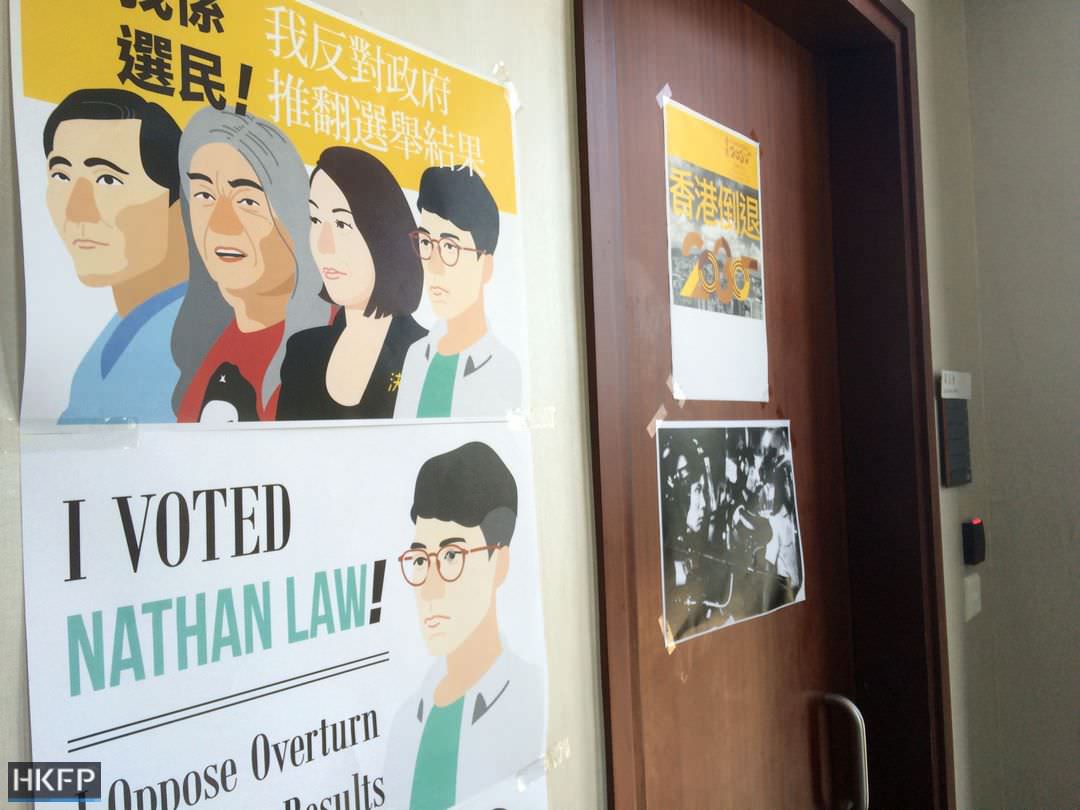 Hong Kong’s youngest-ever legislator Nathan Law had his office on the same floor of the Legislative Council complex. He vacated Room 901, but left behind several posters opposing his disqualification. 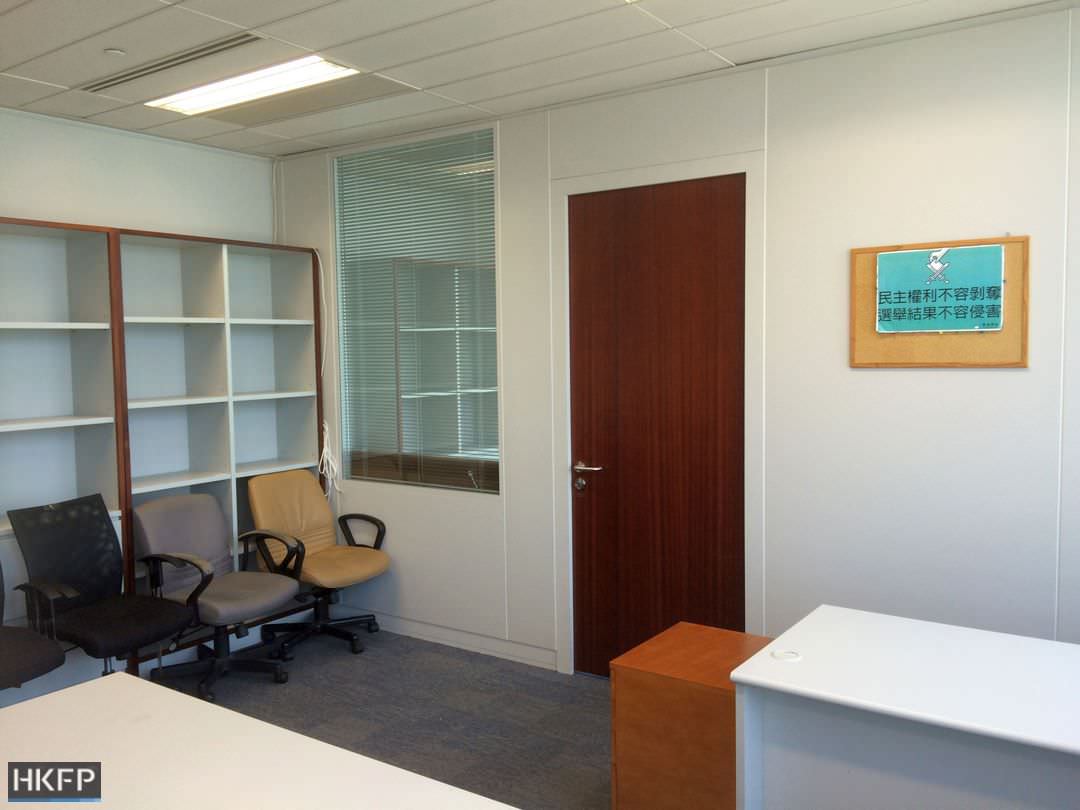 Law spent his final hours at his Legislative Council office being interviewed by a small group of journalists on his nine months as a lawmaker.

“All of us in the office are from the post-1990s generation,” he said. “Room 901 was not only a very young office, it played a huge role in defeating the misconception that young people are incapable of entering politics.” 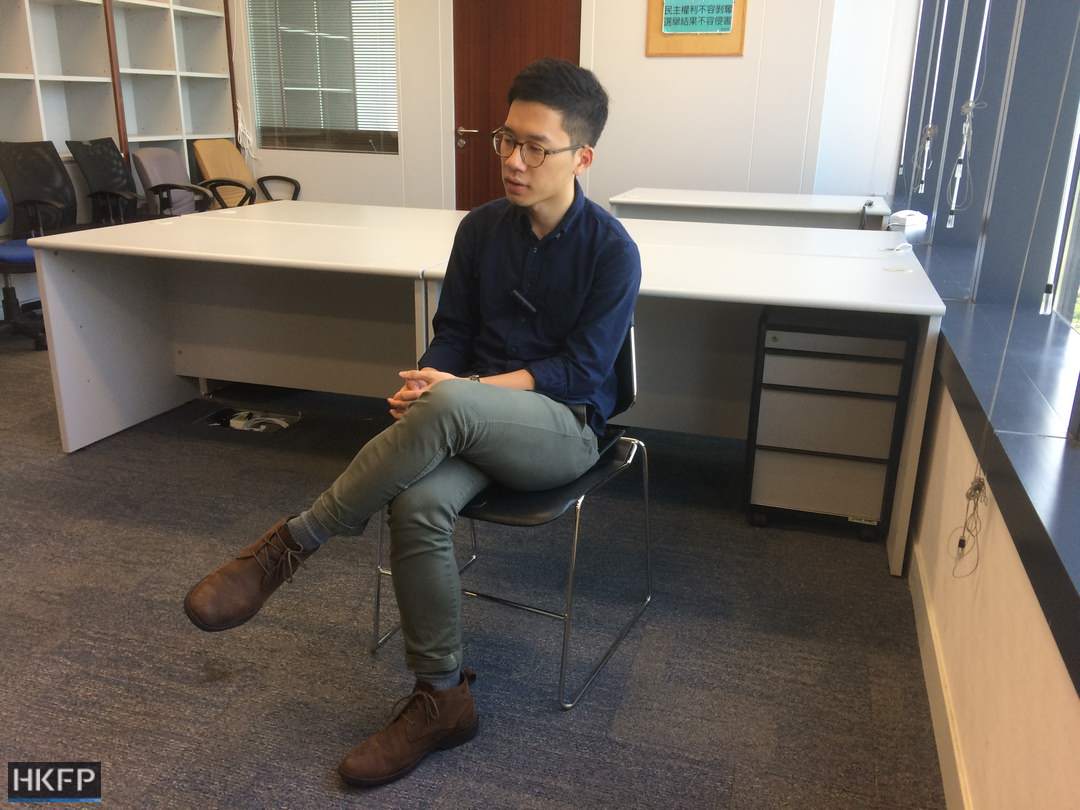 Lau declined media requests to film her departure from her 10th floor office, but joined her three colleagues in protest as they departed from the Legislative Council building on Friday afternoon. 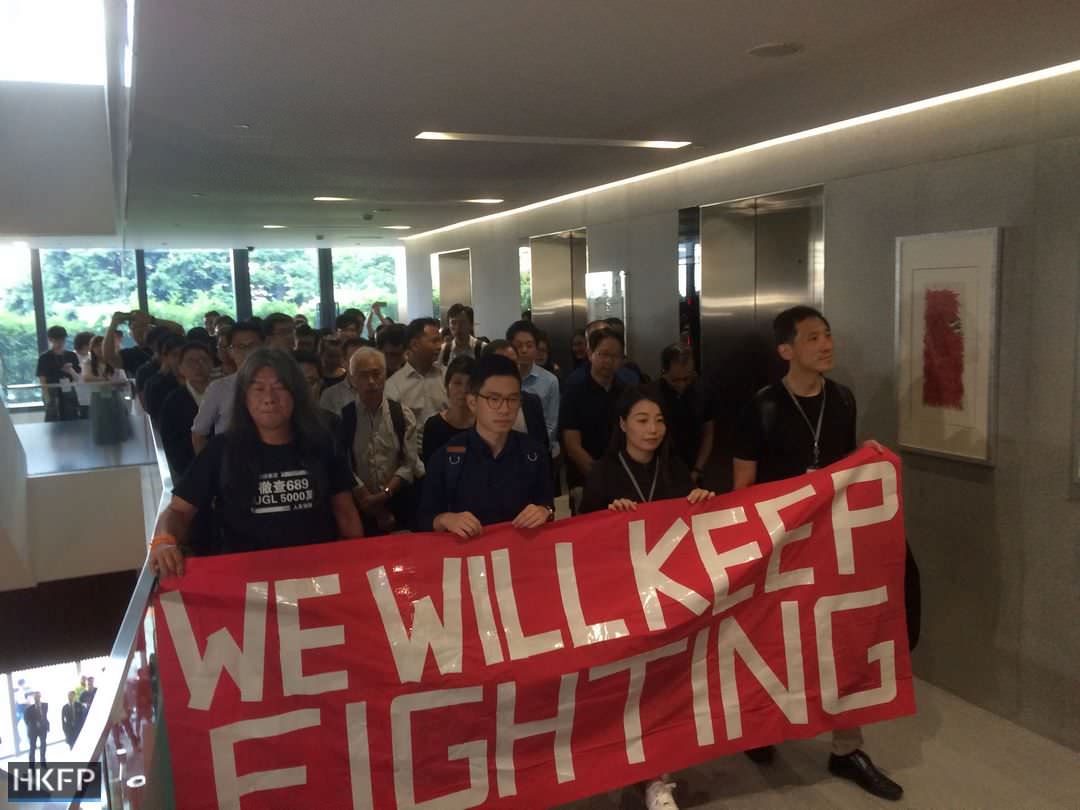 The four disqualified lawmakers as they departed from the Legislative Council on Friday. Photo: Elson Tong/HKFP.

“The disqualification of lawmakers is a disgrace!” they shouted. “We will keep fighting!”

In Pictures: Hong Kong's disqualified legislators pack up and leave their offices