An outgoing deputy police commissioner said Thursday that the force will soon set up a special bureau to handle major incidents such as terror attacks, after reviewing the clashes between police and protesters that erupted in Mong Kok last February.

“This riot revealed the need to strengthen the force’s ability to respond to riots. We also noted the global trend of growing risks of terror attacks, so we need to prepare for unforeseeable danger and train officers in dealing with emergencies,” Deputy Police Commissioner (Management) Alfred Chau Kwok-leung said at a media event. Chau headed an internal committee to review the police’s handling of the Mong Kok unrest. On Thursday, he said the committee concluded that a new Major Incident Bureau should be set up to handle emergencies such as riots and natural disasters.

He said the special bureau will consist of 30 officers and begin operation this summer at the earliest. The officers – led by a senior superintendent – will be trained in a range of aspects, including strategies and coordination.

The Emergency Unit and the Organized Crime and Triad Bureau will also be expanded, according to Chau.

Chau, who has served in the force for 39 years, said Hong Kong had seen a drastic rise in protests since the 1997 handover. He said that while most protests were peaceful, officers “had no choice but to use force” against rowdy protesters, according to Apple Daily. “We referenced the relevant experience of overseas law enforcement agents. Compared with traditional weapons like pistols, the use of non-lethal weapons decreases the risks of injuries and death,” Chau said.

Chau lamented the public mistrust in police, which he said resulted from social tension and an increasingly complicated political climate in Hong Kong.

“Some people misunderstand the police’s role to be obstructing them [during protests]. When joining the force, [we] hope to become an officer who maintains public order and combats crime. I think relatively speaking, handling public events is not the favourite job for my colleagues.”

He added that the force is politically neutral, and officers “only want to do their job well” by enforcing the law against anyone who breaks the law without regard to their political background. 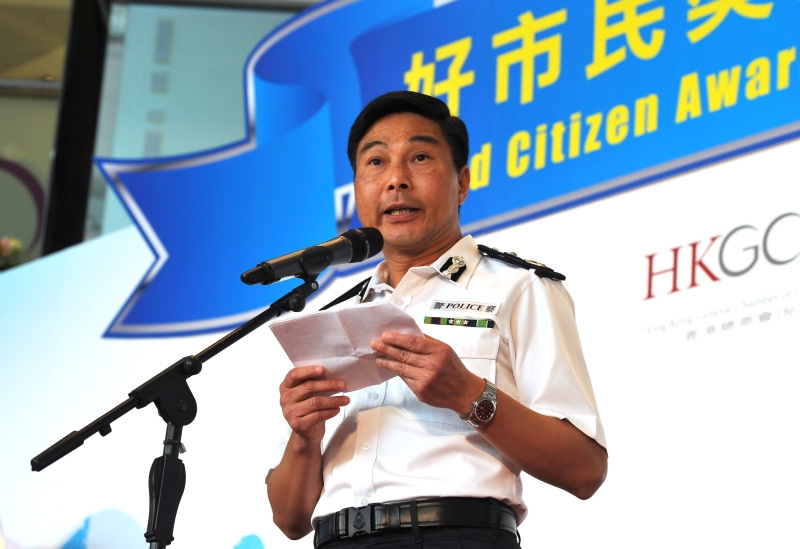 “Time will tell. Hopefully more people will understand our work over time,” Chau said, adding that police have made the effort to improve communication with the public through social media platforms.

See also: You’re all under arrest: How Hong Kong’s gov’t changed its policy on political protests

However, Chau declined to comment on a recent claim of police assault by activists Avery Ng and Figo Chan. The pair claimed they were assaulted by police officers in a police vehicle after they were arrested over an attempted protest against Chinese President Xi Jinping during his visit last week.

News outlet HK01 captured photos showing Ng being pressed against the inside of a police van and his hair pulled. The two activists later reported the case to police. Without commenting on the case, Chau said police take every complaint seriously. He said the force has in recent years introduced a training course to strengthen the “psychological resilience” of frontline officers.

On Wednesday, Chief Executive Carrie Lam was also asked to comment on the assault claim. She said she saw no evidence of power abuse by police, while highlighting the tremendous stress facing frontline officers.

Chau, 57, is set to retire on Saturday. He will be succeeded by 54-year-old senior assistant commissioner Winnie Chiu Wai-yin, who will become Hong Kong’s first female deputy police commissioner.