An independent candidate in the 2015 District Council elections was handed 80 hours of community service on Wednesday after pleading guilty to making false claims of endorsement during his campaign.

Liu Siu-fai, 35, was defeated in the Tsim Sha Tsui Central constituency by pro-Beijing competitor Kwan Sau-ling in November 2015. During his campaign, he produced at least five banners and 1,000 flyers claiming he was endorsed by the owners’ committees of five buildings in the district, reported RTHK. 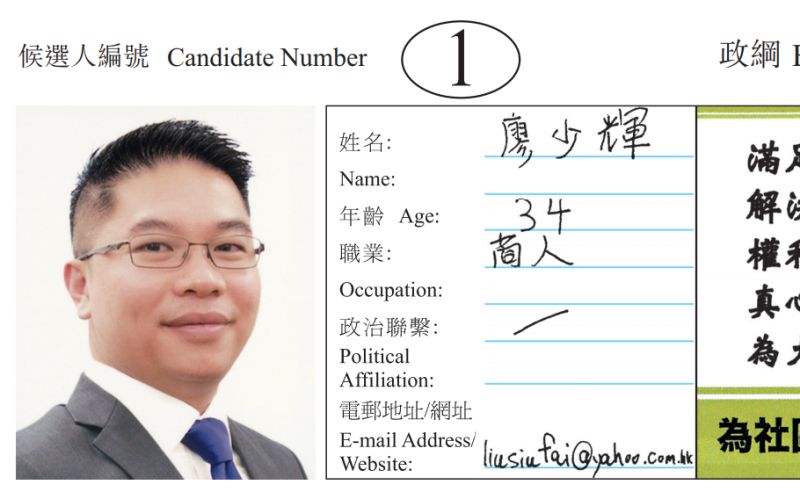 But he was prosecuted by the Independent Commission Against Corruption after the watchdog found the buildings’ owners did not agree to the endorsements.

From People Power to pro-Beijing

A businessman, Liu represented the pro-democracy People Power group in an unsuccessful District Council election campaign in Tsim Sha Tsui East in 2011. However, he told Ming Pao before the 2015 election that he left the group because “there were increasing differences in their respective beliefs.”

Liu was appointed as a member of the top political advisory body of Qinzhou, Guangxi province in July 2014. Then during the pro-democracy Occupy protests that year, he was filmed carrying a Chinese flag and taking down barricades erected by demonstrators in Mong Kok.

Rival pro-Beijing candidate Kwan – of the Democratic Alliance for the Betterment and Progress of Hong Kong – beat him by 1,099 votes to 486 in the 2015 polls, after which he was charged over violations to the Elections (Corrupt and Illegal Conduct) Ordinance. Last month, Liu pleaded guilty during a hearing at the West Kowloon Magistrates’ Courts. His lawyers said in mitigation that the owners’ committees of the five buildings provided him with written – albeit belated – endorsements after the election, reported Ming Pao.

He had already been detained for two weeks prior to Wednesday’s sentence.