Hong Kong law enforcement agents have been conducting a series of drills and setting up security measures in anticipation of Chinese President Xi Jinping’s three-day visit to Hong Kong.

Assistant Police Commissioner Cheng Yiu-mo said Tuesday that the force’s anti-terror measures in northern Wan Chai would be “relatively large-scale.” He asked the public to be patient during Xi’s visit between Thursday and Saturday. But not everyone is pleased with the government’s efforts. Some have criticised the authorities for wasting public resources and causing a public nuisance.

Gigantic barriers have appeared along Harbour Road which connects to the Grand Hyatt hotel – where Xi is thought to be staying – and the Hong Kong Convention and Exhibition Centre, where incoming leader Carrie Lam will be inaugurated. Local media reported that police officers and government workers searched the vicinity of the Convention and Exhibition Centre for explosives.

Cheng said the area north of the Convention and Exhibition Centre will be closed to the public during Xi’s visit. He warned of serious traffic congestion in Admiralty and northern Wan Chai during the events. HKFP noted that the open space outside Central Plaza was also surrounded by barriers. The area was designated as a protest zone for pro-democracy activists during the chief executive election in March.

A worker filling the water barriers told HKFP that it takes seven to eight minutes to fill one – each holds 1.5 tonnes of water. Critics questioned whether the extensive use of barriers was intended to block Xi from experiencing any expressions of public sentiment. On Tuesday, the police’s public relations arm explained on social media the purpose of setting up a large number of barriers.

In a video entitled “Nothing to fear about water barriers,” the force said the barriers were important for protecting the public and officials from being hit by cars during a terror attack. It acknowledged the inconvenience the barriers might bring to the public and sought their understanding.

Marine police and the Fire Services Department were spotted conducting a drill on Tuesday off the coast of Wan Chai near the Convention and Exhibition Centre. The police escort squad has also carried out drills ahead of Xi’s visit. On Tuesday afternoon, the escort team was seen rehearsing on North Lantau Highway. A witness said traffic towards the highway was halted during the drill.

Similar incidents were reported in Sheung Shui on Tuesday and Wan Chai on Monday. Witnesses complained that they had to wait for at least half an hour for the traffic to resume. As a publicity effort, police released materials on Monday introducing the unit.

It said the escort force comprises 59 officers, who are all trained to respond to emergencies. It also introduced the only female officer on the team. The officer said she was an asset to the team as a female in that pedestrians tend to be more receptive to instructions from women.

“They would think to themselves: Oh! It’s a female officer. I will listen to her and not cross the street,” she said. The only female officer on the escort team. Photo: GovHK.

RTHK cited sources as saying that details of non-official events attended by Xi will be kept confidential. Police will set up security zones at the venues of these events, but they may only inform the media two hours before Xi arrives.

Exits of some residential buildings may also be temporarily closed during Xi’s tour of the city. The heavy security measures have attracted criticism. Some said the authorities were wasting public money and disturbing the public. A commenter called the government’s arrangements for Xi “a parade for one emperor.” Another wrote: “Is it worth spending a large amount of money on just one person? The resources should have been spent on Hong Kong people.”

“What is the point of visiting Hong Kong? What [Xi] will be seeing is all pre-arranged. Also, it is a public nuisance to us,” a commenter said. Thursday will mark the second visit of Xi to Hong Kong. He last visited the city in 2008. 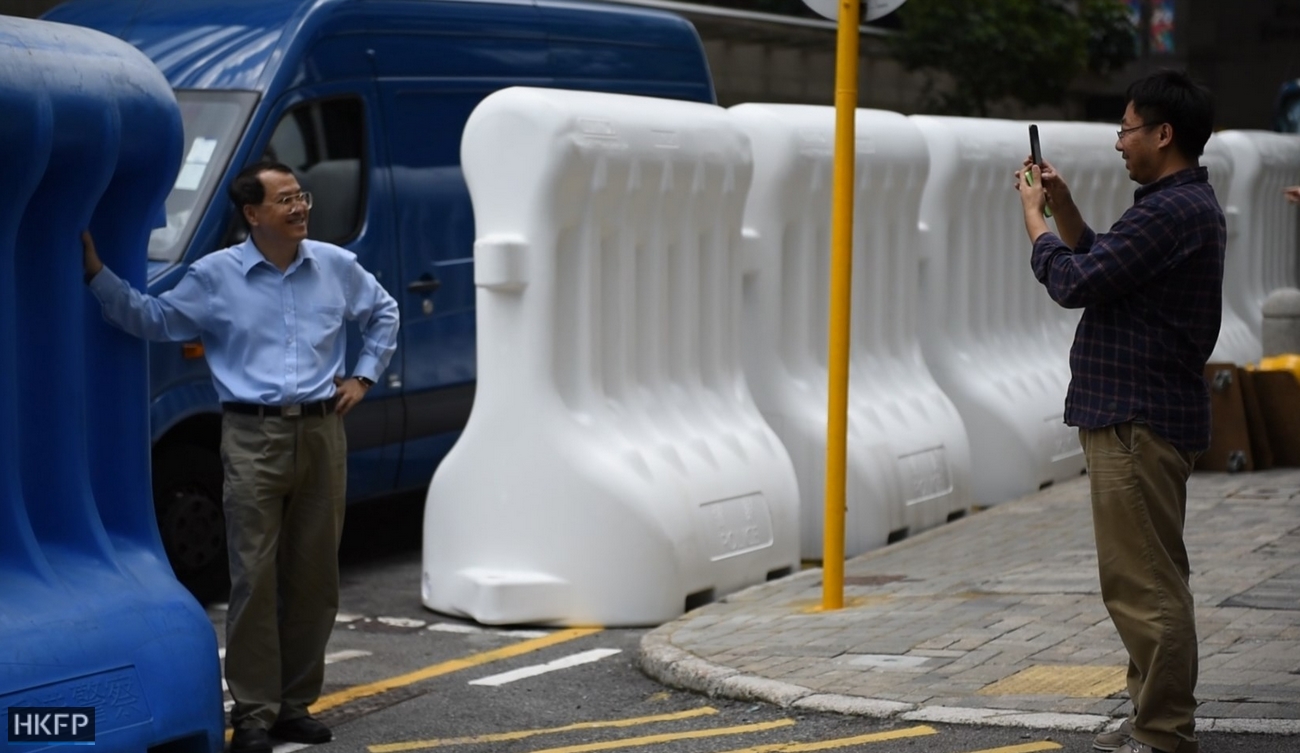 A visitor took pictures with the barriers. Photo: HKFP/Catherine Lai.

Macau has also taken similar level of security measures during the visit of high-level officials from China.

Last month, Macau authorities blocked off streets and prevented residents from leaving or entering their buildings in some areas during Chinese state leader Zhang Dejiang’s visit to the city.