In Sheung Wan, one MTR stop from Central, the old world collides with the new. On Sai Street, boutiques toting Parisian purses coexist with tropical fruit boxing operations and an abandoned apartment building with trees growing from its dilapidated roof.

The neighbourhood has maintained its immense character while others – like nearby Soho – have become somewhat monochromatic as the modern drives out the historic. 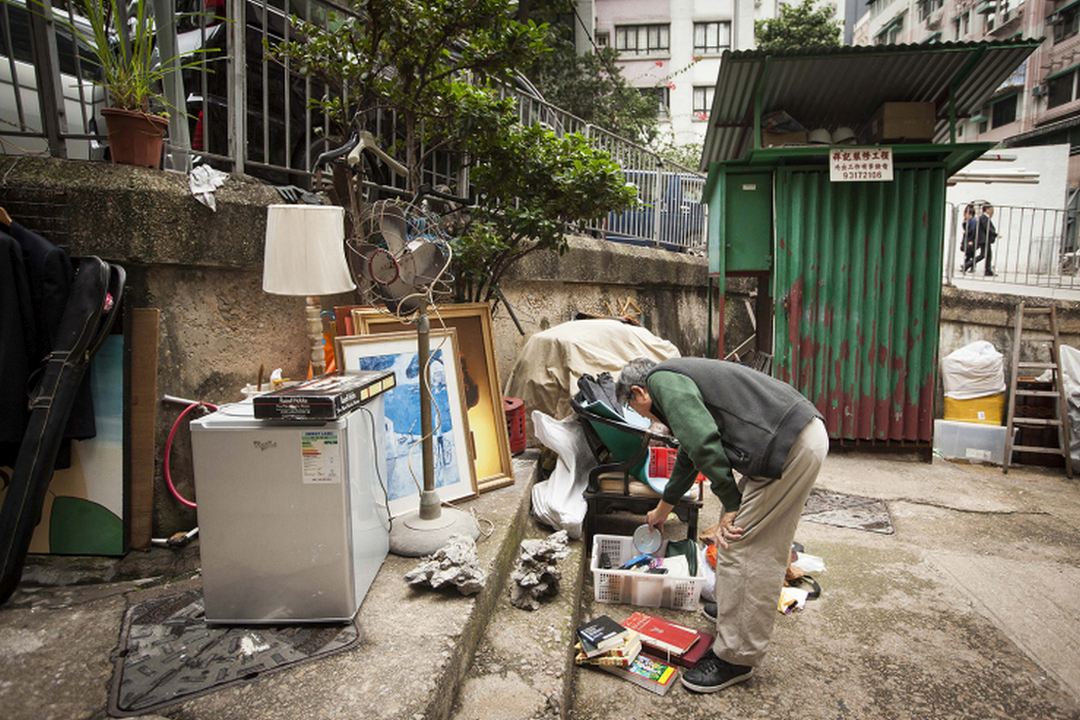 Hollywood Road, which starts in Sheung Wan, was the second road in Hong Kong built by the British when they began their occupation in the 1840s. Foreign sailors began a tradition of displaying rarities and oddities they collected in China for sale along the road.

A century later, it is still lined with a range of antique shops, some showcasing documented valuables in glass cases, others packed with odds and ends that give glimpses into the history of the city. 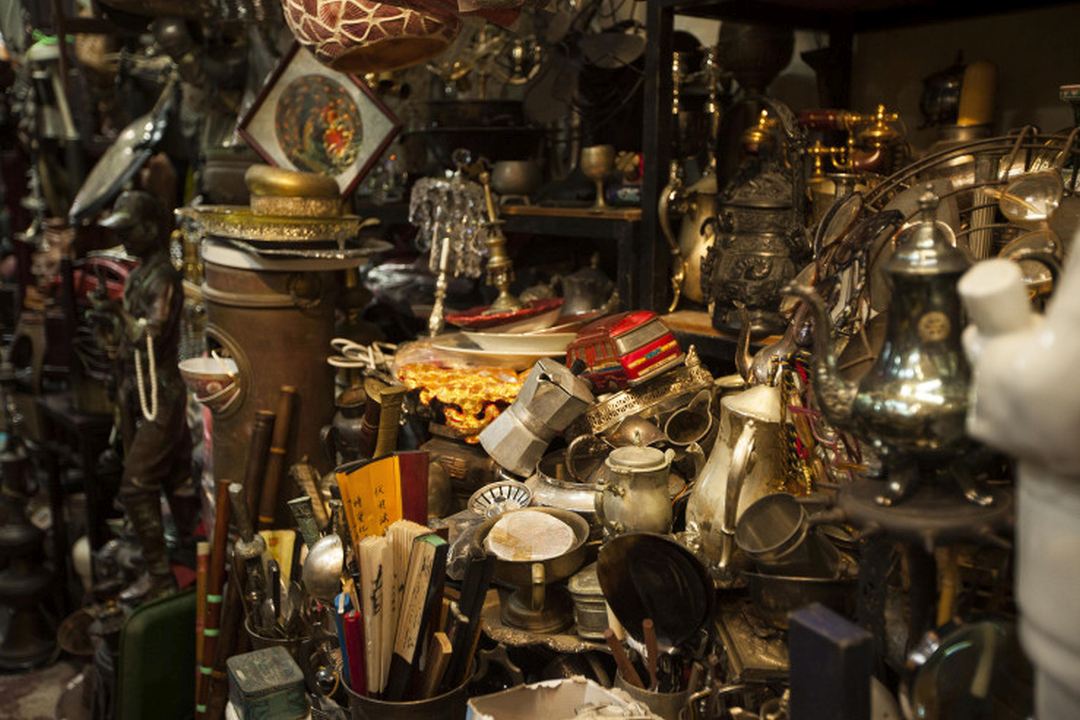 Some of the shops in Sheung Wan are experiencing the financial strain that comes with gentrification. With the Western District popular with foreigners, the property market in Sheung Wan and nearby Sai Ying Pun shows no sign of cooling. 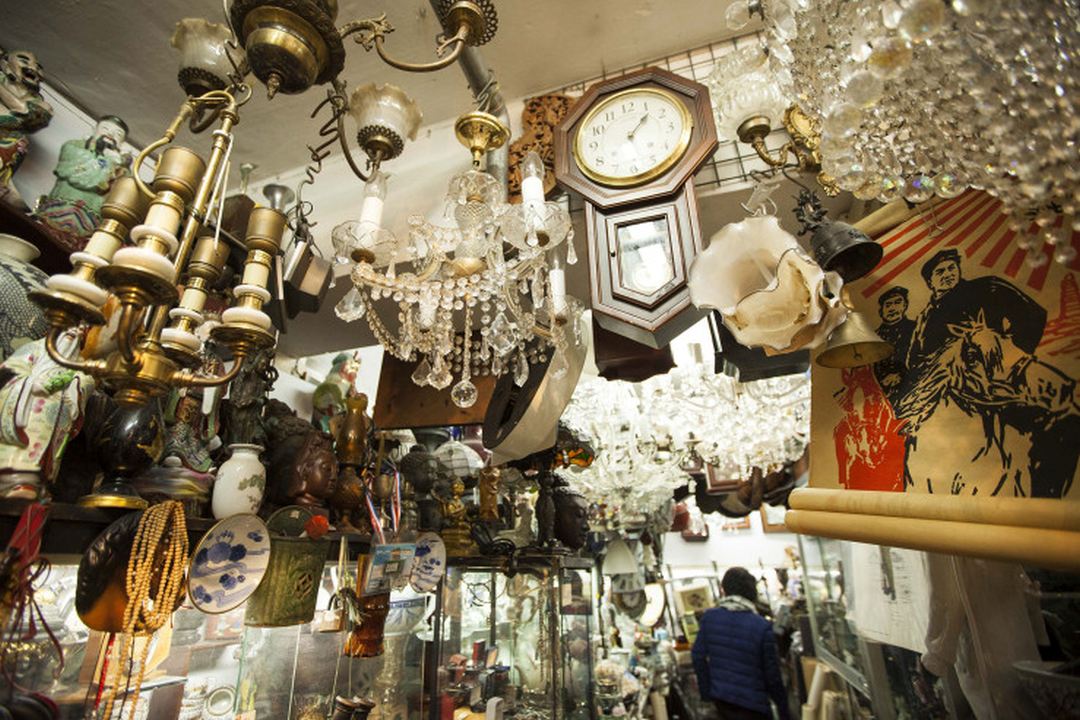 Mr. Ming, owner of Hui Chun Tong on Lok Kwu Road, took over the shop that his father-in-law opened in the 70s: “There has definitely been a lot of change since many foreigners started coming to this neighbourhood and renting shops that used to be antique shops. Now they are opening coffee shops or shops that sell foreign products. The trend is moving in a way that makes me think we might not be here much longer,” he said. 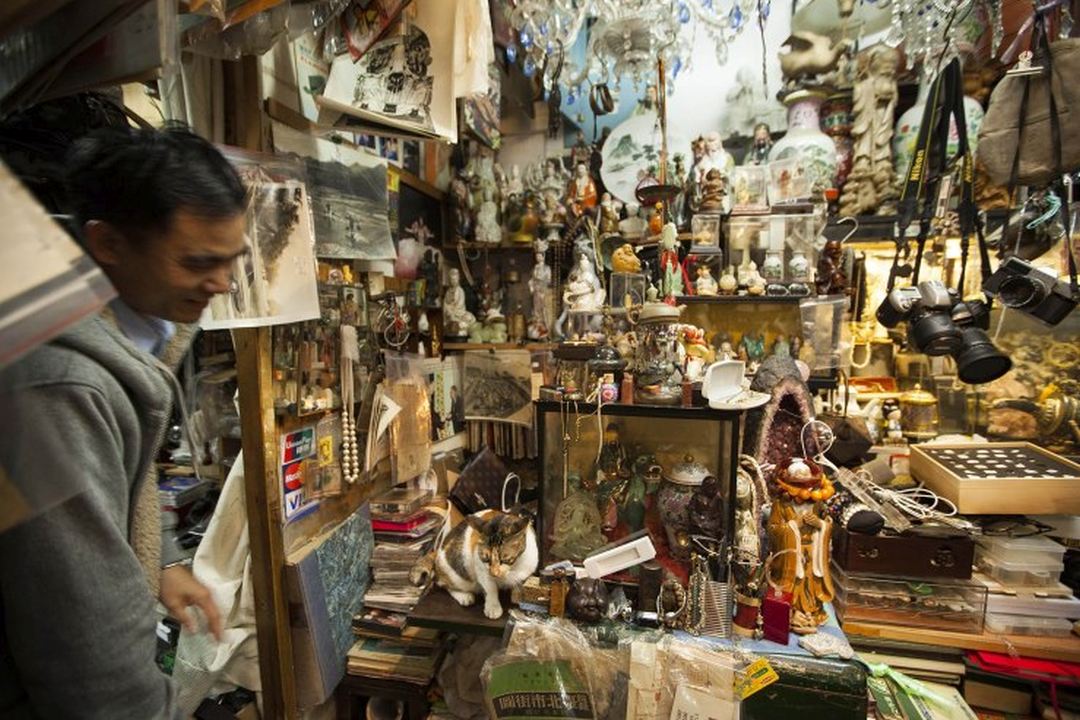 Mr. Ming pointed to an empty storefront up the street: “That shop used to be an antique shop, then foreign investors rented it for more and started a coffee shop, that they poured money into, but it only lasted for about two years. Now the realtors don’t want to bring the rent back down, so it stays empty.”

“Ten years ago this whole neighbourhood was absolutely filled with shops like this, I think eventually it will be sort of taken over.”

Mr. Ming has worked with interior designers in the area whose clients are interested in bringing touches of old Hong Kong to the neighbourhood’s many new apartments.

For Sheung Wan residents who would like to see these shops survive, similar support is an easy way to help. Those looking to be more environmentally conscious of their interior design decisions may also want to keep shops like Ming’s in mind. 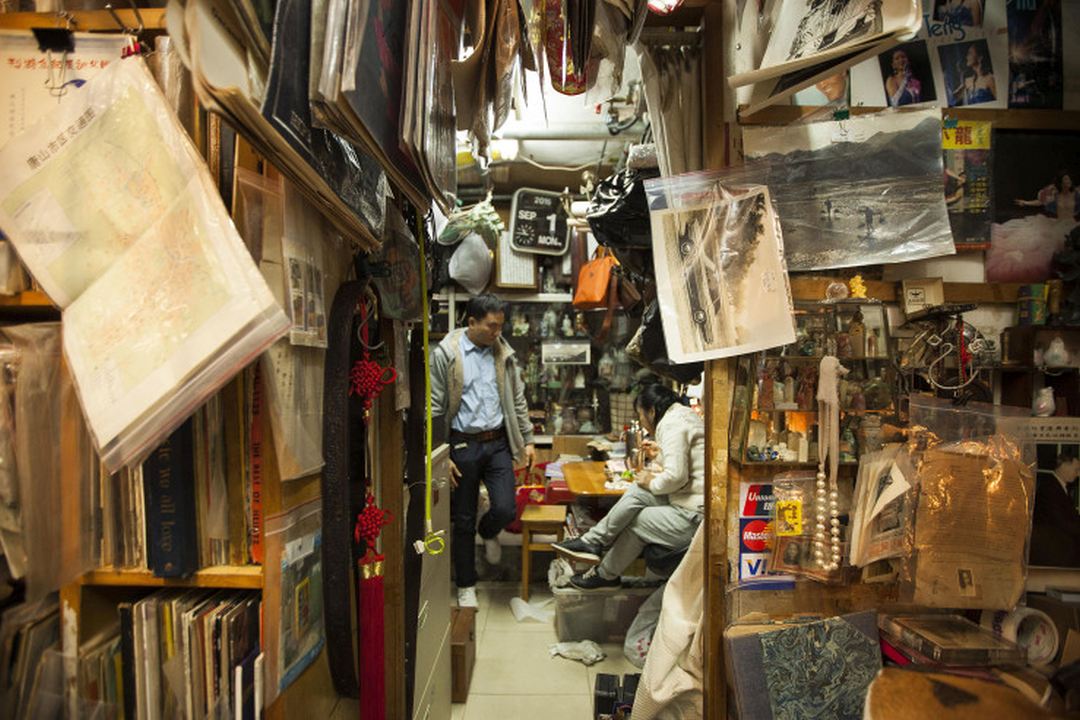 Hongkongers may already be gravitating towards products that are meant to last; Sheung Wan shop owner Perry Chu, who sells new goods, says that the trend in recent years has been towards quality-based products.

“People appreciate handmade goods now, like these hand-woven baskets. There is the quality, but there is also an emotional value to handmade things. You know that someone crafted the product themselves; it gives it a more personal appeal.”

Perry says that products with an older, more nostalgic Hong Kong style have also been selling well in his shop. 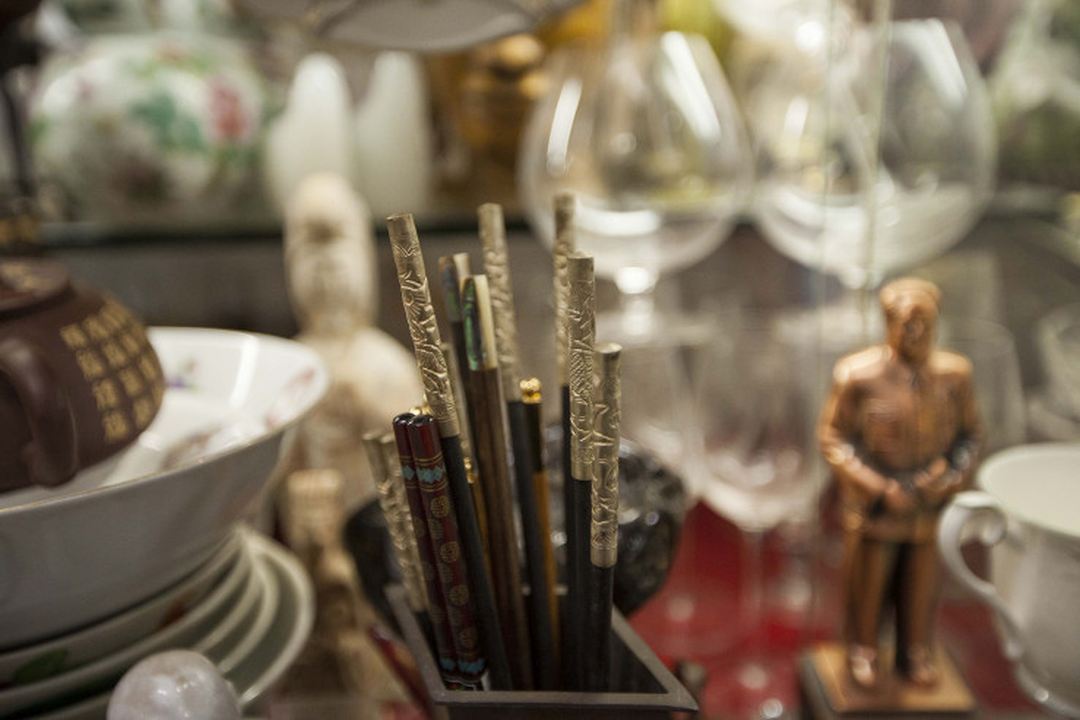 With one of the most expensive real estate markets in the world, it is no surprise that shop owners in Hong Kong make the most of the space they pay for. Perry Chu of Chung Wing Kee keeps more than 10,000 products in his 1,000 square foot store. “We have to keep up to date, we get new products rapidly. Having what people need on a regular basis is what keeps our customers coming back.” 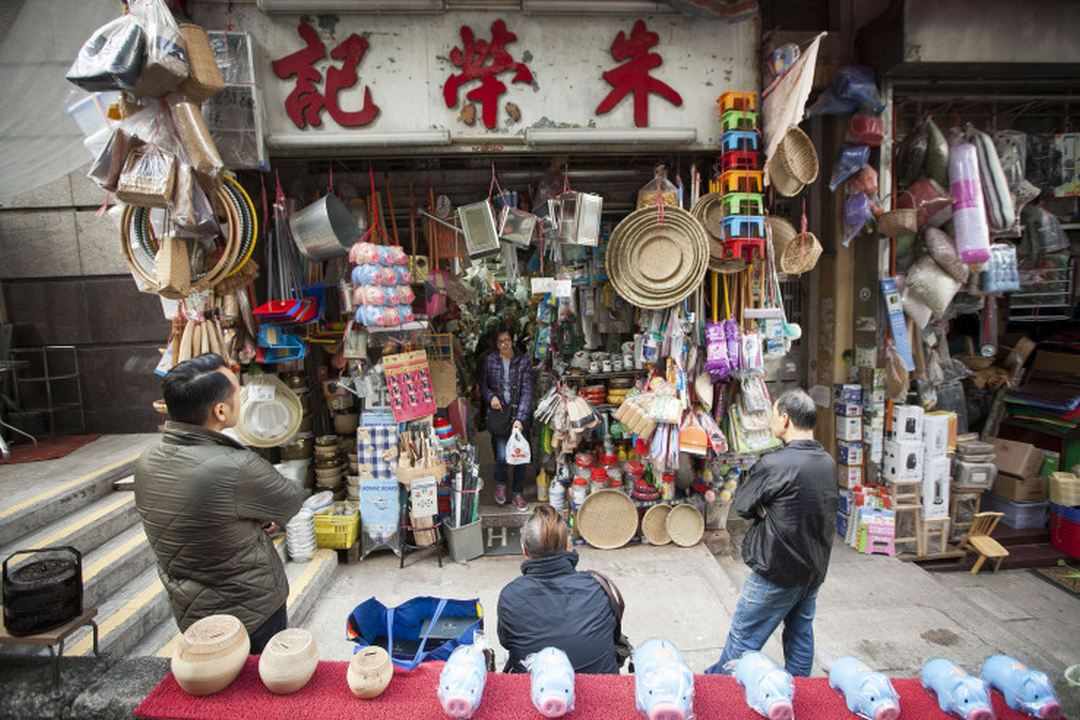 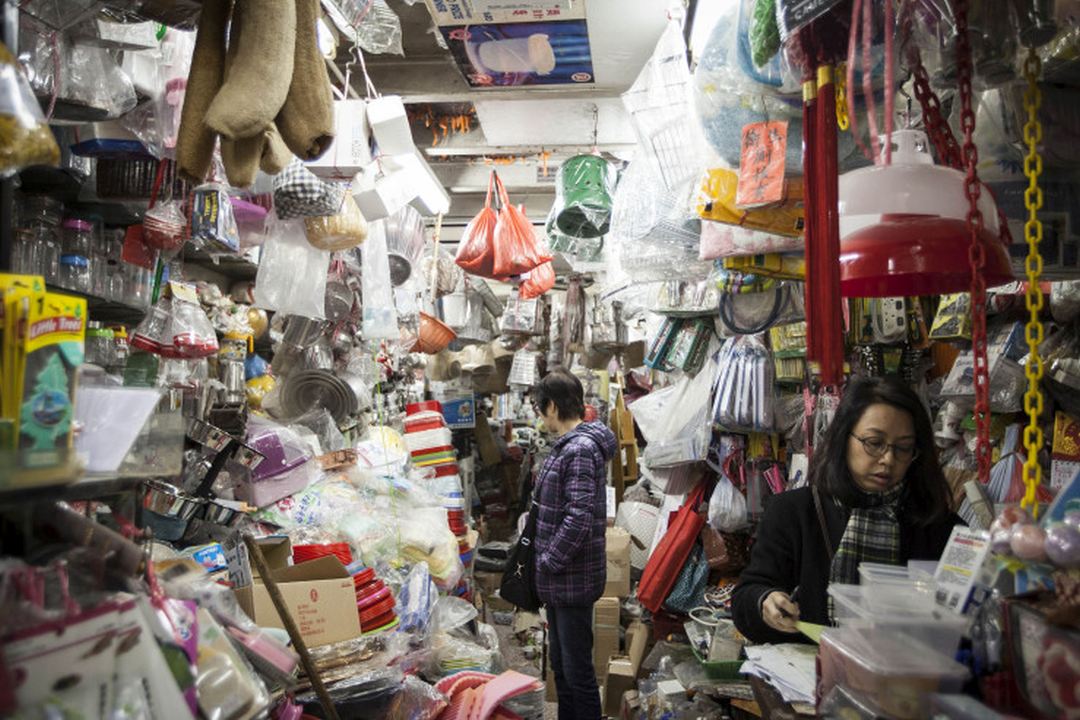 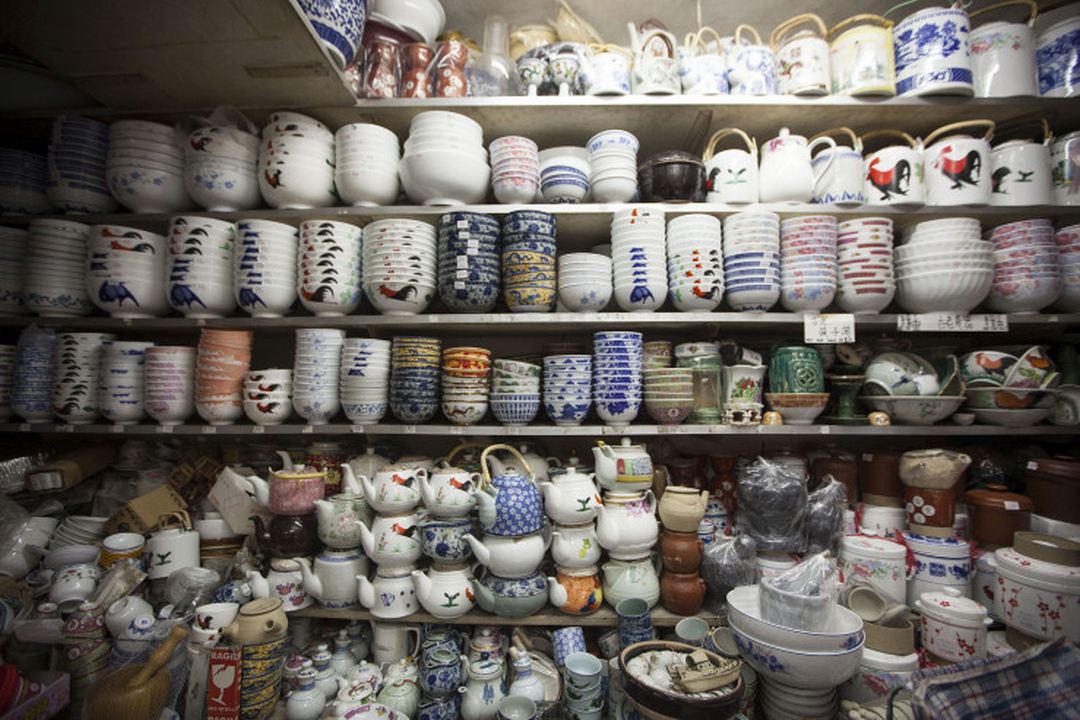 “Our rent is more affordable here because we are not on one of the main streets. My dad first opened a shop 60 years ago, and we’ve moved locations a few times for this reason.” 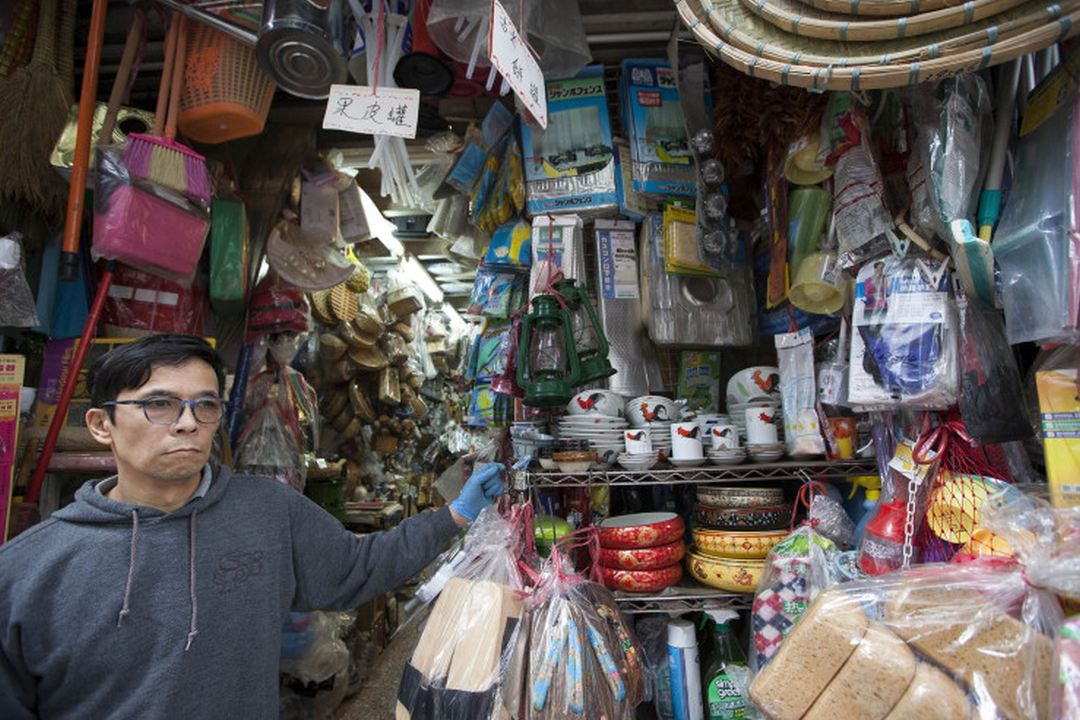 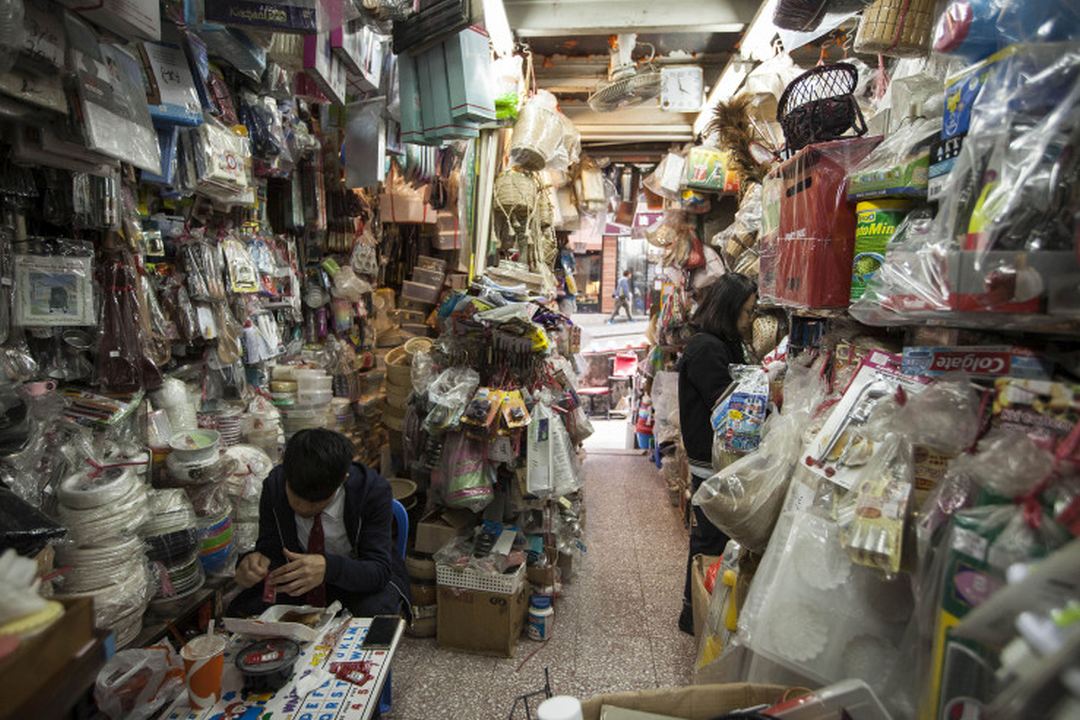 Up the street from Perry, on Hollywood Road, the Chans run Hip Ho Warehouse, which from the outside resembles an extremely eclectic, yet meticulously organised, collection of household goods and random necessities including rubber rain boots, feather dusters and the classic Hong Kong carts that elderly people use to transport their things around. 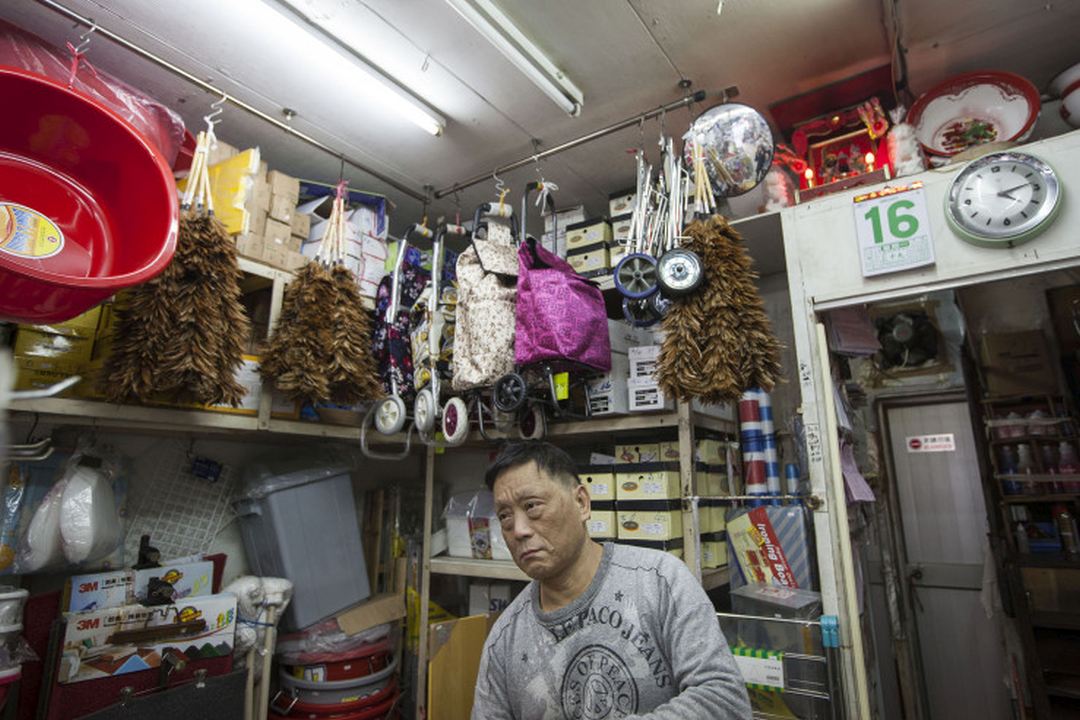 The Chans revamped their store to operate as a display for other shop owners to buy from them in bulk. They only keep a few of each item in the store to make room for a diversity of products. Along with competition from online companies like Taobao (a Chinese version of Amazon) the Chans have mounting concerns about retail.

“Many of our customers were around our parents’ age and now they have either passed away or moved into retirement homes, or more affordable places, and they don’t come around anymore. So it isn’t just that there are new businesses all around, it is that our customers are not here anymore.” 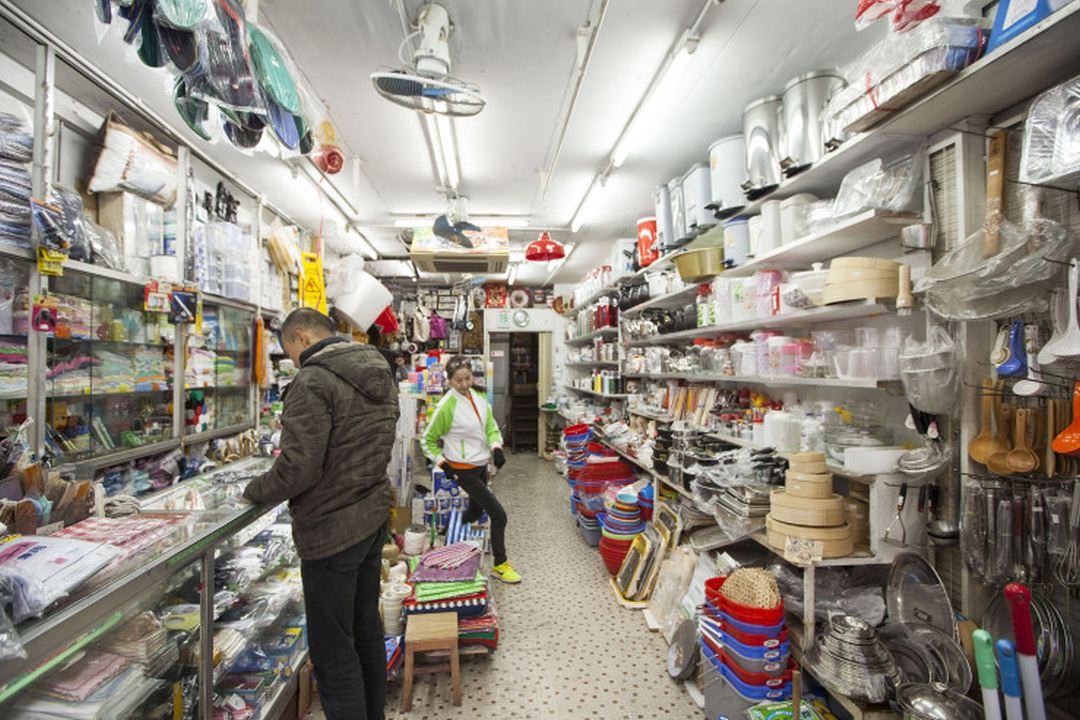 Many of the shops in Sheung Wan have deep roots in the neighbourhood. Mr Chan’s father first opened a shop there 60 years ago, and has been in the space where their shop is now for 40 years. Of the shopkeepers I interviewed, the Chans were the only family who owned the store. “We live upstairs with my father; that made it more reasonable to buy, being able to live here,” said Mr. Chan.

Down the street, on Lok Ku Road, 72-year-old Luk Kee has been renting a storefront for over 25 years. His compact shop is filled with antiques including paintings, watches, coins, fans, and vases. On the wall of Luk Kee is a sign that translates to “Uncle Luk’s Memory Shop” which is how Luk says he prefers to think of his business. Luk says he has no intention of retiring anytime soon. The shop is a source of interaction where old friends and people from the neighbourhood can stop in to talk.

“I don’t take holidays, even for the first day of Chinese New Year, I like to stay open. People come in and say Happy New Year, and talk for a while. It is nice to have something to keep me busy. I don’t like to watch TV; I’d rather be here. I’m 72 years old. I need to keep my brain busy.” 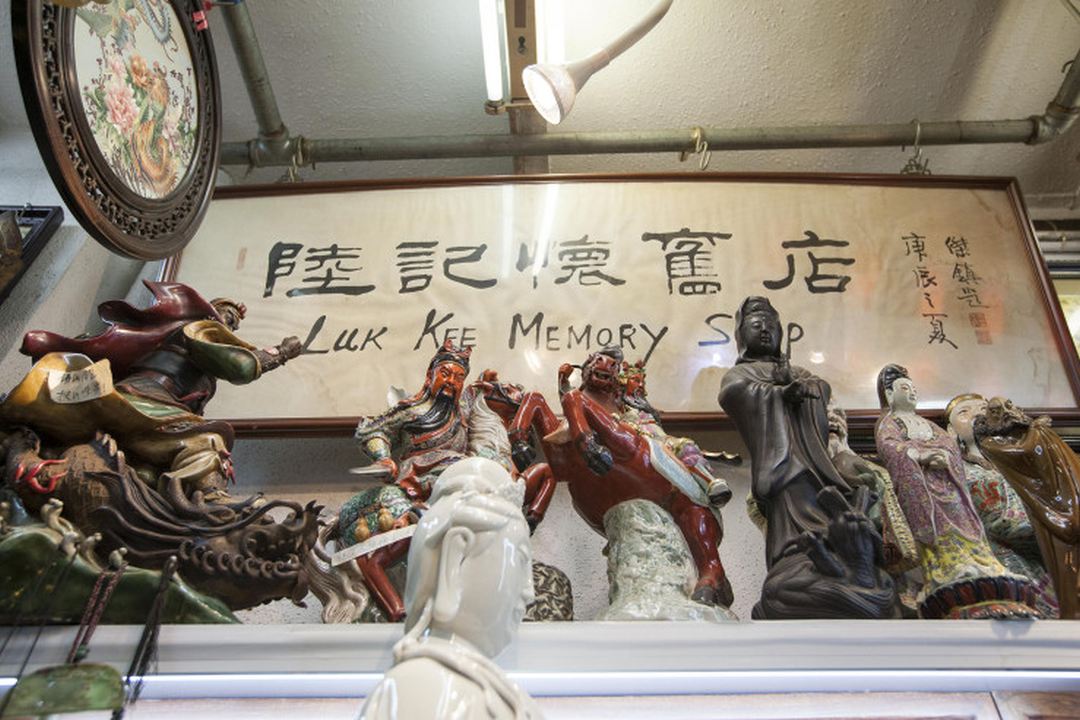 Luk says his shop has been less busy for the past few years. “Before the handover in 1997, mostly foreigners bought things in my shop. After ’97, it was foreigners and people from mainland China. Business was good until the Umbrella movement. I think the conflict has made many people not want to visit Hong Kong, mostly people from Mainland China.”

His son-in law, Mr Ming, who runs a shop up the street, lamented the younger generation’s transition towards online consumerism, decreasing business in physical shops like his. “I think a lot of the things people can find in my shop, now they just want to find on eBay instead of coming here. We tried eBay and Tao Bao, but it was a lot of work, and we didn’t like the process without any interaction.” 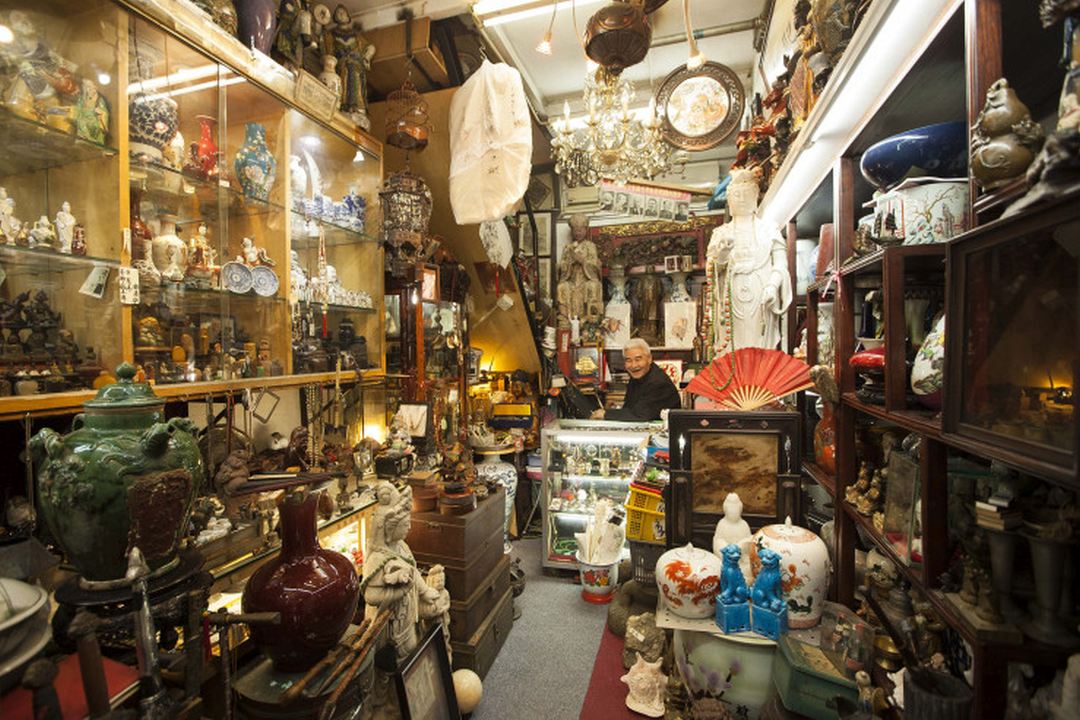 When I asked Mr. Ming what he likes most about his shop, he said: “What I love about running this shop is when people come here who are really looking for something special, and then they finally are able to find it. I can see the happiness in them when they find what they were looking for and I am also happy about it. I think shops like this are a part of Hong Kong culture.” 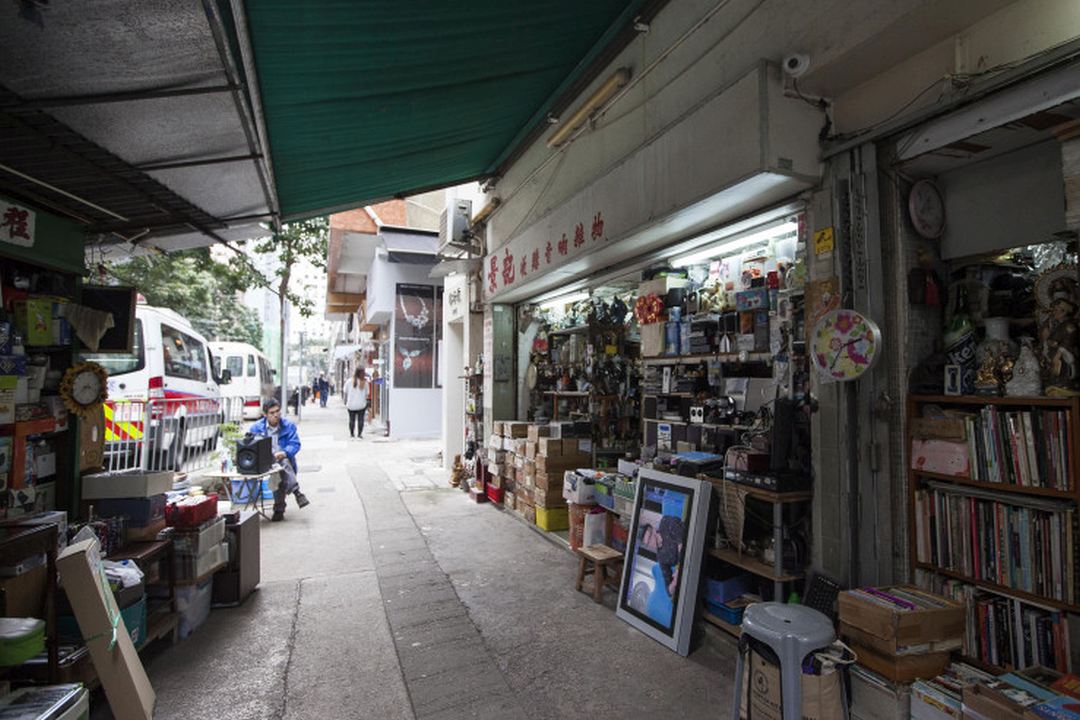 The charm of Sheung Wan comes from the juxtapositions: the curio shops and decaying buildings which sit alongside new facades and boutique coffee shops. If the old world pieces of this charismatic neighbourhood were to be thrown out with the proverbial bathwater, it would be an irreversible loss to Hong Kong culture.

Viola Gaskell is a photojournalist from Hawaii, where she got her start freelancing for the Maui News and generating content for non-profits. Now based in Hong Kong, Viola’s work focuses on the nuances and contradictions of Hong Kong culture. Her photography and writing can be seen routinely on Rice Media and Zolima City Magazine.